The 49ers discovered a new weapon in their win over the Arizona Cardinals. Rookie wide receiver Quinton Patton had a big day, as he emerged in time for the playoffs.

Share All sharing options for: 49ers vs. Cardinals: Well hello there, Quinton Patton

The San Francisco 49ers reached deep into their bag of tricks, and got plenty of big performances, as they defeated the Arizona Cardinals 23-20. Anquan Boldin had the biggest day, Vernon Davis scored a touchdown, and Michael Crabtree made a clutch third down conversion. However, the real revelation had to be rookie wide receiver Quinton Patton.

The man nicknamed The General (and in command of his own battlewagon!) had a huge game for the 49ers. He finished the game with 34 receiving yards and 26 rushing yards. His stats were not particularly notable, but he made numerous key plays to help the 49ers earn their 23-20 victory.

Patton's first touch came in the first quarter, on the 49ers first drive. On 1st and 10 at the Arizona 34, he took a handoff on an end around and gained 26 yards.

As the GIF shows us, Patton took the toss from Colin Kaepernick, and followed Vance McDonald down the field. McDonald got the first block, and Patton cut in instead of out. Had Patton cut outside, he likely picks up the first down, but goes out of bounds shortly after. By cutting back in, and picking up a block from Anquan Boldin, he turns a likely 10+ yard run into 26 yards.

Later in the first quarter, with the 49ers leading 10-0, Colin Kaepernick connected with Anquan Boldin on a short pass to the right side of the field.

As Boldin cut up field, Kassim Osgood got the first "block" (some may say "hold"). Shortly after, Daryl Washington can be seen coming up behind Boldin in pursuit near midfield. The General then makes his appearance, blocking Washington at the Cardinals 45-yard line. He didn't send Washington to the ground, but he did a great job re-directing Washington away from Boldin. Q then cut toward the middle of the field and eventually got down to the Cardinals 3-yard line.

The catches are great, but one thing the 49ers pride themselves on is the blocking of their wide receivers. Michael Crabtree is one of the best in the league, and Anquan Boldin is a beast himself when it comes to blocking. Seeing Patton contribute in this area was huge.

And of course, we can't write about Patton's day without his huge catch in the fourth quarter. In the fourth quarter, Kap threw to Patton on 3rd and 2 at the Arizona 38. Patton was unable to haul in the catch, and the 49ers had to settle for a Phil Dawson 56-yard field goal. After the game, Patton admitted he was disheartened by the play, but got some words of wisdom from Anquan Boldin.

The next drive, with the game tied, 18 seconds remaining, and the 49ers facing a 1st and 15 at their own 49 after a delay of game penalty, Kap looked Patton's way once again. Here are two GIFs of the play:

The first GIF shows Patton making a little out and up move after five yards. Antoine Cason doesn't bite and does a great job staying in coverage. The problem (or good thing in Patton's case) is that Cason did not try and make a play on the ball. He looked back at the QB, but it happened after the ball was already in the air. By the time he realized the ball was, Patton was in the air over him making his move for the ball. Patton made an absolute circus catch to get the 49ers into field goal range. The team called their last timeout, and Phil Dawson came on to win the game with a 40-yard field goal as time expired.

The small sample size argument remains in effect, but it's hard to not get overly excited about what Patton brings to the table. He didn't do much before injuring his foot, and this was his first game of regular season production. However, given the brief energy we saw in the preseason, and given how little we've seen of the 49ers third receivers this year, I think many of us can sell ourselves on Quinton Patton.

He's been a favorite of Jim Harbaugh since he showed up early for rookie minicamp, and Colin Kaepernick took a shining to him in training camp. He's going to get his opportunities this weekend against the Packers. It remains to be seen what he'll do with those opportunities, but he has the confidence of his coach and his quarterback. That is a huge deal, and could bode well for the 49ers. Michael Crabtree, Anquan Boldin and Vernon Davis bring a ton to the passing game, and are still likely to be the primary playmakers. However, if they can get a couple decent-sized players per game from Patton, this offense could add another gear.

As the 49ers get ready for their upcoming Wild Card matchup at the Green Bay Packers, I leave you with ak4niner's designation! 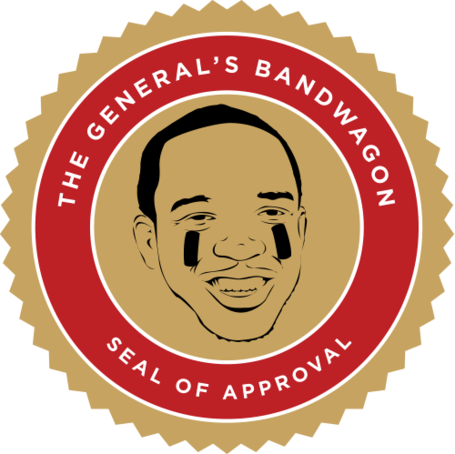