"I don’t think we’ve played our best football yet. We’re not where we expect to be."

Welcome back to The Booth Review. The San Francisco 49ers improve their record to 8-4 after a heated victory over the division rival St. Louis Rams. What did we learn? Find out inside.

Michael Crabtree's first reception of the season came on a 2nd-and-19 with the first quarter winding down. Within the context of the game, it only meant an eight-yard gain to set up 3rd-and-11. Under ordinary circumstances, it might have elicited a restrained hum from the stands. In reality, it meant so much more to the Candlestick crowd as evident by the mass of scarlet red jerseys spontaneously rising to their feet and erupting in applause.

"It felt good. It's good to be out there," said Crabtree, who returned to action on Sunday for the first time since suffering a torn Achilles' tendon in May.

While Crabtree's debut was rather modest as far as numbers are concerned, it provided a glimpse of what we can expect from San Francisco's group of receivers operating at full-strength. Even with Crabtree playing at less-than-100 percent, it freed up his counterpart, Anquan Boldin, to wreak havoc.

Boldin received a team-high 13 targets, 46 percent of Colin Kaepernick's passes, bringing down nine of them for 98 yards.

"You know, it's about time he gets double-teamed now," Boldin said of Crabtree in the post-game press conference. Crabtree, standing to his right, grins and shakes his head. 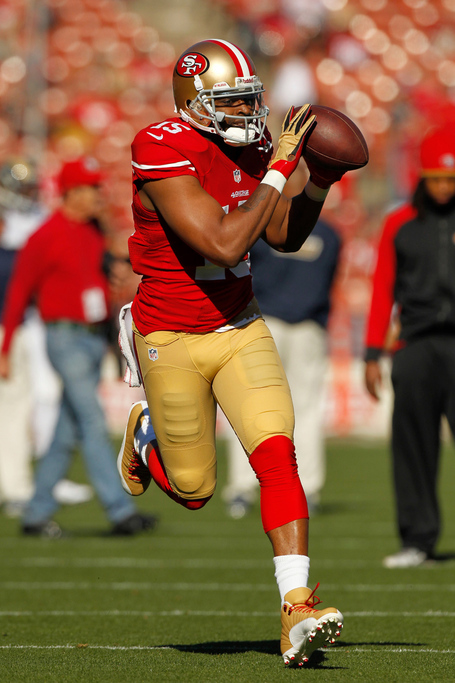 "It feels good," Boldin continued. "Like you said, when you have a guy like that on the other side, it definitely relieves pressure off of you. It frees you up to just go out and play ball. It's good to have him back."

Crabtree's second (and final) reception of the game was considerably more characteristic of what we've come to expect from him.

After cradling the ball out of the air, Crabtree sprints down the right sideline past cornerback Trumaine Johnson before shutting him down for good with a stiff arm. Eventually, several Rams defenders catch up to Crabtree and with nowhere to go, he falls to the ground - a dazzling 60-yard reception that brought the San Francisco offense crashing into the red zone.

Crabtree brandishes his classic mischievous grin as he slaps hands with teammates on his way back to the huddle.

The entire offense may have gotten a little too caught up in celebrations as they forget the play clock is still rolling and are forced to use a timeout. But company doesn't seem to mind - Kap smiles heading back to the sideline and Boldin gives a playful slap to the crown of Crabtree's helmet.

It's a special occasion, after all. Yet Crabtree had one regret.

"I wish I would have scored," he said, as Boldin and Kaepernick look down and snicker to themselves. "I was supposed to take that to the house."

"It was just in the moment that I said, ‘I'm going to jump over that guy.' " - Vernon Davis

Vernon Davis, another beneficiary of Crabtree's presence, seemed to have a very simple game plan on Sunday: hurdle over everyone and everything.

With safety T.J. McDonald bearing down on him, Kaepernick heaves a beauty off his back-foot into the arms of Davis who hurdles over one defender and bounces off three more, the last of which he drags along by his right ankle for a few extra yards. It was like a play out of game tape from his days back at Maryland.

A second leap came later in the fourth quarter with the offense in the red zone. Kaepernick, moving right out of the pocket, patiently scans the field before finding Davis who cuts back inside and makes another hurdle over a dejected Janoris Jenkins into the endzone.

Davis sinks the jumper over the crossbar, and the Niners are up 23-6.

"Over pretty much my whole career, any time I get the ball in my hands, defenders are coming for my knees and my ankles," Davis explained, "but it was just in the moment that I said, ‘I'm going to jump over that guy.' I just did whatever I could do to make a play."

During the third quarter, the St. Louis defense deployed a rather interesting strategy to combat the oft-airborne Davis. Kaepernick fired left to Davis who made the sideline catch before being dragged down by McDonald. On the ground, Davis writhes and rolls around in obvious pain while clutching his lower-midsection.

Upon viewing the instant replay, it quickly became apparent (to every male, anyway) why Davis reacted the way he did. I'll let Vernon speak for himself.

"It should be a league rule saying that a defender can not tackle a player by his penis," Davis wrote in a tweet that he later deleted. "The most painful thing ever!" 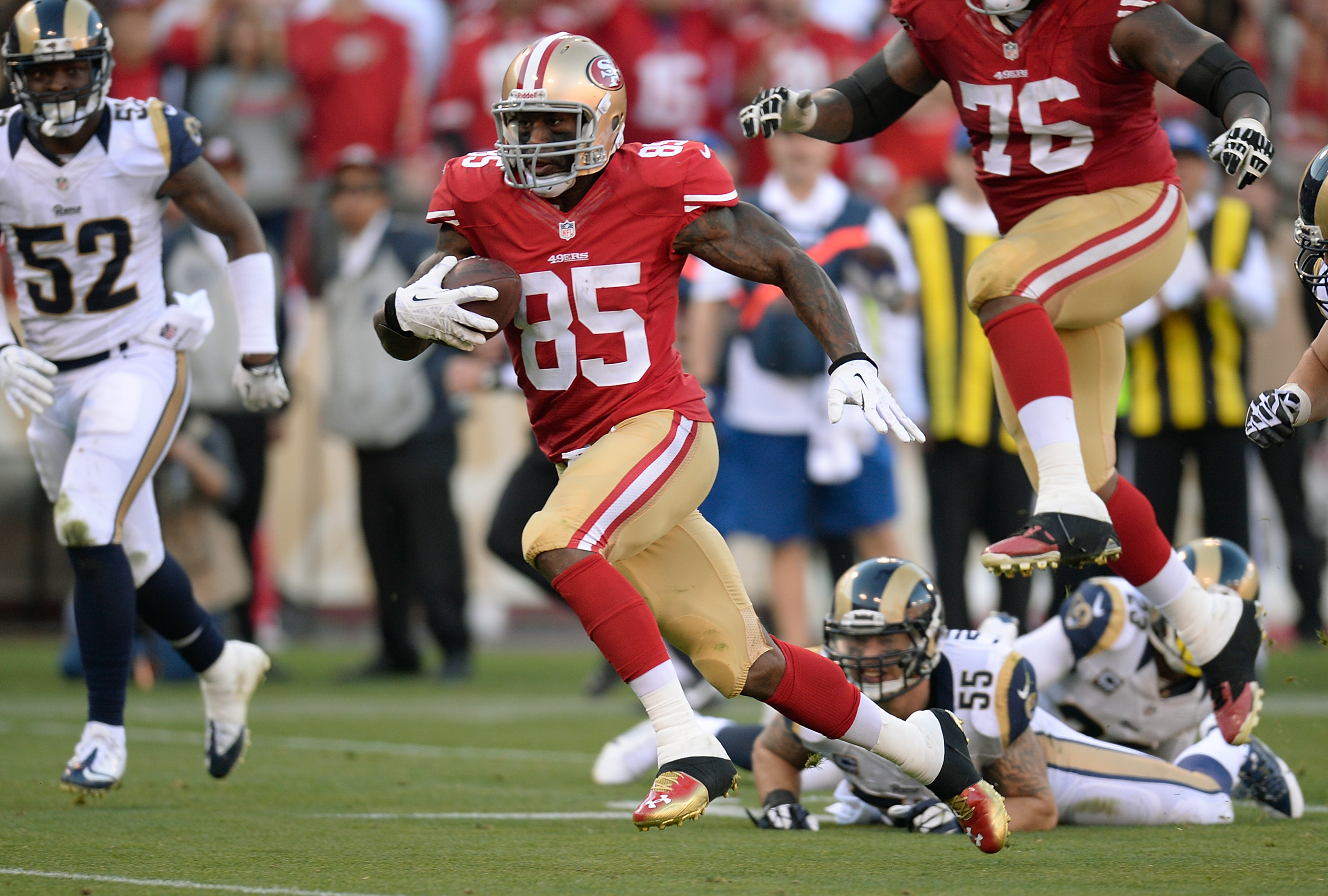 Left tackle Joe Staley went down on San Francisco's first drive of the game, forcing coaches to make some crucial early adjustments. After all, it's not exactly apples for apples when you're replacing the anchor of your offensive line.

"Any time you've got a starter and a Pro Bowl-caliber type guy that's standing on the sideline, that's not a good situation." - Adam Snyder, on Joe Staley

Alex Boone, who started the game at right guard, was given the task of covering Kap's blindside in Staley's absence. Second-year lineman Joe Looney, who had previously not seen regular season action, was inserted at right guard. With Adam Snyder filling in for the injured Mike Iupati, that meant the offensive line was working without three out of their five starters.

"Any time you've got a starter and a Pro Bowl-caliber type guy that's standing on the sideline," said Snyder, "that's not a good situation."

All things considered, the patchwork group held up rather well. Boone, in particular, deserves much praise. Working out of position, he was able to stave off Robert Quinn who entered the game with 13 sacks on the season - the second-highest total in the league. Quinn, who many feel is a surefire 'Defensive Player of the Year' candidate, was essentially shut down. That's pretty remarkable. 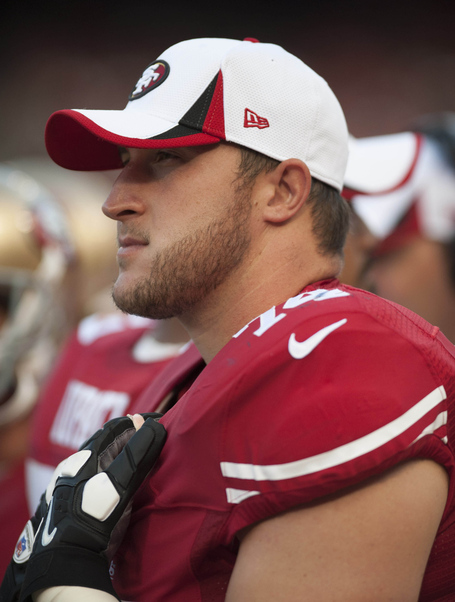 While the tackle position isn't entirely foreign to Boone - he was Ohio State's starting tackle during his four years there - he spent the previous two years in the NFL as a guard.

When there was miscommunication on the line, it was ugly.

On one play, Snyder missed his blocking assignment entirely and allowed the defensive tackle into the backfield, unperturbed, to bring down Kaepernick for the sack.

In total, Kaepernick was brought down four times for 20 yards. But again, it was an admirable effort all-around considering the circumstances.

We later found out that Staley had a sprained MCL, the same injury that kept Iupati sidelined on Sunday. He will most likely miss this Sunday's game against the Seattle Seahawks, a must-win if the Niners hope to hang onto the last Wildcard spot.

But even beyond playoff implications, the team has plenty of incentive to overcome the Seahawks - they haven't forgotten about the embarrassing 29-3 loss at CenturyLink Field earlier this September.

Asked if his squad will be ready this Sunday, Boldin was quick to bite back.

Let's hope they get there soon.