Super Bowl 2013: Ten statistical reasons why the 49ers will win

According to efficiency stats, game charting, and likely strategies, there are 10 reasons why Super Bowl XLVIII shouldn't be as close as many are predicting. Then again, who can deny the magic of Ray Lewis?

Share All sharing options for: Super Bowl 2013: Ten statistical reasons why the 49ers will win

Greetings, everyone. For those who don't know who the hell I am, I wrote stats-based articles for Niners Nation for three years before becoming Assistant Editor at Football Outsiders (FO). As someone who was around here for the sorry McNolan days of 49ers fandom (and created Mike Nolan drinking games of yore), I've been bestowed the privilege by David to join in your long-awaited, much-deserved revelry.

FO's alpha dog, Aaron Schatz, posted our preview on Thursday, so go ahead and read it if you're so inclined. Today, about 36 hours until our beloved Niners vie for a sixth Lombardi trophy (!!!), I'm going to give a synopsis of what I think are the most important parts of Aaron's analysis, and add a few statistical tidbits that weren't covered in the piece.

Just as background, FO may be a stats site, but through our game charting project, and weekly features like Film Room by Andy Benoit and Word of Muth by former Stanford offensive lineman Ben Muth, we try as best we can to take a holistic approach to NFL analysis. Statistics are nothing without context, so a combination of objectivity and subjectivity goes a long way -- as you'll see. So, without further delay, let's preview Super Bowl XLVII, a game that I personally think (based on all the information at my disposal) clearly favors San Francisco.

Let's start with a general idea. FO's main statistic is called defense-adjusted value over average, abbreviated DVOA (explained in full here). In a nutshell, it's a measure of play-by-play efficiency (which fans of Bill Walsh should love given how that's essentially the organizing principle of the West Coast offense), and as of right now it goes back to 1991. We know the Super Bowl winners since then, so we can see how DVOA has done in preferring one Super Bowl combatant over the other over the past two decades. It turns out that, according to DVOA, the better Super Bowl team overall (i.e., combined offense, defense, and special teams) won the Super Bowl 14 out of 21 times, as did the team with a better pass defense. In 2012, the 49ers (fourth and eighth, respectively) were better than the Ravens (sixth and 13th) in both categories.

Zooming in, here's the first bit of Aaron's preview that I find pertinent:

The 49ers led the league in Second Level yards allowed per carry, and were second in Open Field yards per carry (those stats are explained here)...[Ray] Rice averaged only 1.3 yards after contact, fifth worst among backs with at least 200 carries. The 49ers defense allowed a league-low average of 1.2 yards after contact.*

The thing about this is that, despite Baltimore's overall improvement during the postseason, their inability to get big gains in the running game hasn't changed. In 63 carries against Denver and New England, Ray Rice and Bernard Pierce combined for only seven runs of 5-10 yards, and four runs of over 10 yards. In other words, 83 percent of their carries went for five yards or less.

We also know that the Ravens are in 21 personnel (i.e., two backs, one tight end) on 36 percent of their plays (their second-favorite besides 11 personnel), and run the ball 60 percent of the time with that group on the field.* (Basically, if you see Vonta Leach and Ed Dickson on the field at the same time tomorrow -- news flash -- it's likely a run!) Why is this important? Well, it's because that personnel group keeps the Niners in their base 3-4, which is their most successful defensive personnel group against the run.

Also relevant for Baltimore's running game fortunes on Sunday is that they use a zone blocking scheme. Lo and behold, the 49ers have faced eight teams this season who also feature zone blocking. In those games, their Run Defense DVOA was -16.8%, which means they were 15-20 percent better than the average run defense in such situations. (Negative numbers are good for defense).

Then there's this, which practically speaks for itself:

We know that the Ravens like to throw deep, and the Falcons certainly had some success with deep passes in the NFC Championship. During the regular season, however, San Francisco had the league's best DVOA against passes that went over 15 yards through the air.

But aside from the 49ers being No. 1 in deep pass defense, here's a picture that's worth a thousand words: 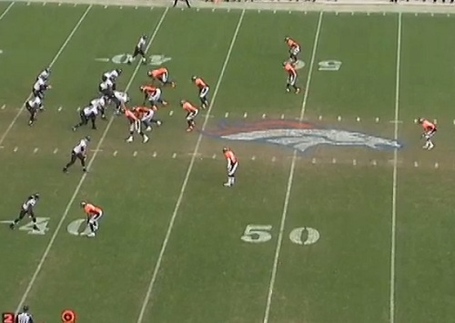 This is the alignment just prior to Torrey Smith's 59-yard, first-quarter touchdown against the Broncos. On the play, Denver is in Cover-1 before the snap, which turns into Cover-3 after the snap, but all the while Champ Bailey is in man-to-man coverage with no safety help (bottom of picture). Of note for Sunday: San Francisco's pass defense rarely plays Cover-1 or Cover-3, and almost never puts a cornerback on an island. Smith's second touchdown came against Cover-2 man, which is what the 49ers play, but that time Bailey got zero help from safety Mike Adams, who you may remember from San Francisco's halcyon days of pass defense circa 2004-2006. Either way, Baltimore's successful deep plays against Denver -- they didn't have many against New England -- exploited a coverage the 49ers never play and/or a safety light years worse than Dashon Goldson and Donte Whitner, never mind the epic fail of Denver's other safety late in the fourth quarter.

So if the Ravens don't match up well against the 49ers in terms of running or deep passing, then maybe they can find success in their underneath passing game?

The 49ers' numbers against running back screens this year are interesting. They forced a gain of less than five yards more than half the time, but had a very poor overall average of 7.9 yards allowed because they allowed a couple of huge plays like a 50-yard gain by Joique Bell in Week 2 and a 22-yard gain by Steven Jackson in Week 13.

So the Niners defense gave up two big plays on screens. More importantly, thanks to the man-to-man coverage prowess of Patrick Willis and NaVorro Bowman, San Francisco ranked seventh on tight end targets and eighth on running back targets. To boot, despite that 7.9-yard average, our game charting shows that they nevertheless had the fifth-best defensive success rate against running back screens this season.

Essentially, for most everything Baltimore likes to do (or has had recent success with) on offense, San Francisco is either very good at defending it or doesn't play the kind of coverage that's susceptible to it. Instead, as I talked about in my preview of their Divisional Round playoff game against Green Bay, the 49ers' weakness is when they're in dime personnel (6.7 yards per play and 56 percent defensive success rate). Unlike the Packers, however, the Ravens had four wide receivers on the field (i.e., the personnel group San Francisco would respond to with dime) on less than one percent of their offensive snaps this season.*

Particularly noteworthy, though, is the matchup when San Francisco's offense has their 12 personnel group on the field (one back, two tight ends). I just mentioned that they use it 24 percent of the time, which was the 10th-highest frequency in the league this season, but it's also their best personnel group from both a production and efficiency perspective (7.1 yards per play, 54 percent offensive success rate). Baltimore's defense, on the other hand, has played their worst against 12 personnel (5.8 yards per play allowed, 52 percent defensive success rate) despite it being the grouping they faced second-most often during the regular season.

As Niners fans, you know how much their offense has used read-option out of various iterations of the pistol formation since Colin Kaepernick took over at quarterback. Cue Aaron:

Baltimore faced a similar offense once this year, against Washington in Week 14. They mostly contained Robert Griffin (7 carries, 34 yards) but because they always had to have a defender assigned in case Griffin kept the ball, they couldn't stop Alfred Morris (23 carries, 129 yards). However, that team didn't have Ray Lewis, Terrell Suggs, or Dannell Ellerbe on the field. They also lost Jameel McClain in the third quarter to a spinal contusion, which left them playing Brendon Ayanbadejo and Josh Bynes at inside linebacker.

Certainly, Baltimore's injury situation had a major impact on their inability to stop pistol read-option that day. However, one can easily interpret this as implying that nearly half of the Ravens' front seven have had zero gameday experience defending it. Which brings me to the following:

In an article at Grantland [on Thursday], Chris Brown [of Smart Football] believes that the Ravens will try to make up for this by bringing an eighth guy into the box...

Brown also mentioned using Cover-4 (i.e., "Quarters"), which is actually Baltimore's favorite type of coverage. But then he said this about the eight-man box option:

The obvious weakness, however, is that it puts a lot of pressure on the cornerbacks, who are left with one-on-one matchups on the outside. This becomes especially problematic when the offense uses play action.

You don't say? Back to Aaron:

Based on this sort of analysis, I correctly predicted that Vernon Davis would emerge from hibernation against Atlanta. On Sunday, I wouldn't be surprised at all if the 49ers play-action passing game finally takes advantage of Randy Moss playing possum on deep routes for the past four months, and he makes a big play or two downfield.

Finally, there's one more matchup that deserves mention: San Francisco's offensive line against Baltimore's front seven (or eight). Aside from our Ben Muth saying the former is the best unit in the NFL, there are these situational stats that give the 49ers a leg up:

And to that last point, a lot of what I've seen this week breaking down Baltimore's improvement in pass rush and coverage during the playoffs has totally neglected the fact that they faced statues in their mid-30s the past two games. Indeed, it turns out that the Ravens' worst defensive game this postseason came against the only opponent led by a young, mobile quarterback (actually 20 percentage points of DVOA worse than their games against Denver and New England). Against the Colts, Baltimore gave up 8.8 yards per carry and had a 74.6% DVOA (positve numbers are bad for defenses) on eight Andrew Luck scrambles.

So, let's recap what the objective stats and subjective game-planning analysis tell us:

I know this preview sounded exactly like what you would expect from a fan viewing the Super Bowl through rose-colored glasses; and maybe it is. Nevertheless, I'd challenge anyone to make an argument for why Baltimore will win that isn't based on Ray Lewis being a wizard or he and his compatriots being the proverbial "Team of Destiny." But you know what? I don't really care if you can. Niners fans have suffered long enough, and already went through the heartbreak of loss-by-randomness last January. We've been waiting 18 years for this, so we deserve a stress-free, comfortable win on Sunday. It's simply an added bonus that the vast majority of statistical evidence is in their favor.