Jim Harbaugh, 49ers continue to look for every edge to improve

Jim Harbaugh frequently talks about how the 49ers can find that needed edge to improve. We take a look at their work with Stanford and others in their attempts to improve on and off the field.

Share All sharing options for: Jim Harbaugh, 49ers continue to look for every edge to improve

Tuesday afternoon, Jim Harbaugh wrapped up the 2012 season with his end-of-year press conference. He spoke about the coaches and players getting some much needed R&R after a grueling season. However, Harbaugh also discussed the need to constantly be looking for that edge that will help players and the franchise improve:

[T[ake a couple of weeks to recharge the battery, but also thinking while we're doing that on how to get an edge, what our edge will be, individually looking at ourselves and seeing how we can get better. I think that's always the hardest lens to look at it through. Everybody's going to want to have a lens to look at this season or look at this last game, or the final plays of the game. But our lens really has to be, and it's the toughest one to look through, is ‘How can I improve?' Accountable for our own edge and improvement in those areas. So, critical? Yeah, vitally, vitally critical.

It was pretty good timing on these comments, as I had a chance to learn one more technique the 49ers have used, and will continue to use to keep the players in top physical shape.

I frequently get emails about an assortment of apps, products and interviews. During the two weeks leading up to the Super Bowl, the number of emails seems to increase about ten-fold. I quickly delete many of them, but the week of the Super Bowl I received a particularly interesting one that I decided to pursue. I learned about something called CoreControl, which is a cooling system manufactured by TSS Technologies and used by the San Francisco 49ers.

The CoreControl glove is designed to help treat heat illness. It was invented by professors at Stanford, and they are using TSS to help get the product out to market. Bruce Read, CEO of TSS was out in New Orleans with the produce along with the 49ers medical director, Dr. Dan Garza. I had a chance to speak with Bruce and Dr. Garza at the 49ers hotel to try out the glove, and learn about some of the science behind it. 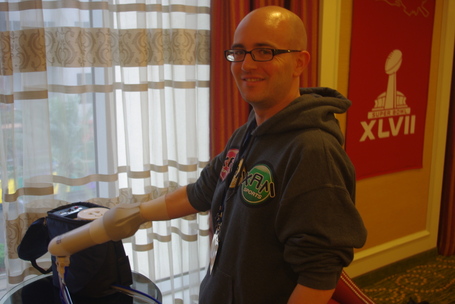 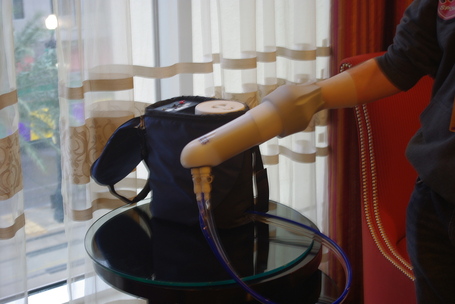 It turns out, our palms and the soles of our feet act as "radiators" for dissipation of heat. When an athlete gets hot, blood flows to those surfaces. As muscles get too hot, they will shut down to prevent overheating. There is a safety concern, but there is also a performance concern as it can slow down an athlete.

The glove is meant to provide the optimal temperature so that heat is dumped out, but not so cold that the veins, capillaries and whatnot constrict. As CoreControl describes it, "your palm is a radiator for excess heat and CoreControl accelerates the process. The cooled blood returns directly to the heart and is perfused to the rest of the body reducing fatigue."

According to their peer-reviewed scientific research, they are able to quick remove the heat and extend endurance by as much as 25%. The key is to cool down and allow for faster recovery.

You would not generally be able to see the 49ers using these on the sideline because their size allows them to be slid down near the benches. When players come off the field from an offensive or defensive series, they slide their hand in and get a quick cool down, be it 30 seconds or a few minutes. I tried on the device and while I was not working out prior, I could feel the immediate cool-down.

At this point, the device is used by the 49ers, Golden State Warriors, a lot of Stanford sports and the St. Louis Rams. The Stanford football team piloted it after it was invented by Stanford professors. Stanford actually does a lot of research work with their athletes, whether it be researching heat illness, concussions or ACL treatment.

I asked Dr. Garza why the team was ready to jump on this bandwagon. After all, we hear about miracle cures all the time. The fact that it was Stanford-invented was a big help, but as he said, "the proof was in the pudding." Seven years ago, IV usage plummeted, which they viewed as a big deal. Plugging in an IV sends in fluids that will quickly be urinated out, and excessive use of IVs can lead to calcification in the veins.

There were devices before this, although they were much bigger. The 49ers used one such device as early as 2000, but as Dr. Garza pointed out, players do not want to show weakness. Something smaller and more portable allows for quick use and discard when it is time to get back on the field.

The product is now available on the market, and it sounds like they will be marketing to teams, schools and fitness clubs. Individuals can buy the product for $895, so if you're looking to boost your endurance for your golf game, go to town!

What I found most fascinating about this is the way the 49ers are able take advantage of their proximity to and relationship with Stanford University. We hear a lot about how Oregon and Nike are intertwined up in Eugene. While the gear is great, having the brilliant minds at Stanford helping figure out ways to improve the team strikes me as a slightly better deal. Jed York has talked a lot about making the new Santa Clara stadium the most advanced technological stadium in the world. While this is not quite stadium-related, this is one more indicator of the 49ers working toward becoming the most technologically advanced franchise in the world.