Some additional thoughts on the acquisition of Anquan Boldin. How did the trade happen? What does this mean for Mario Manningham? What does Boldin bring to the Niners offense? Read on, Faithful.

Earlier this month, the Baltimore Ravens made Joe Flacco the highest-paid quarterback in the history of the National Football League. The reigning Super Bowl MVP inked a six-year contract worth $120.6 million including $52 million in guaranteed money. Did Flacco deserve such a lucrative deal? That's debatable. However, with big names like Ed Dickson, Dennis Pitta, Dannell Ellerbe, and Paul Kruger facing free agency or seeking new contracts, there were bound to be some cap casualties.

Anquan Boldin was the first among them. How did it happen?

Boldin, 32, was due $6 million for the 2013 season, a cost the Ravens couldn't afford. They initially asked Boldin to take a $2 million pay cut, but he refused. That meant it was only a matter of time before Boldin would be released (which is most likely why the trade offers were paltry late-round picks). After dealing Percy Harvin away to the Seattle Seahawks, the Minnesota Vikings looked to Boldin to fill the void in exchange for a seventh-round draft pick. The San Francisco 49ers were able to do one better by offering up a sixth-rounder from their own bounty of draft picks. I'm sure the brotherly connection didn't hurt either. 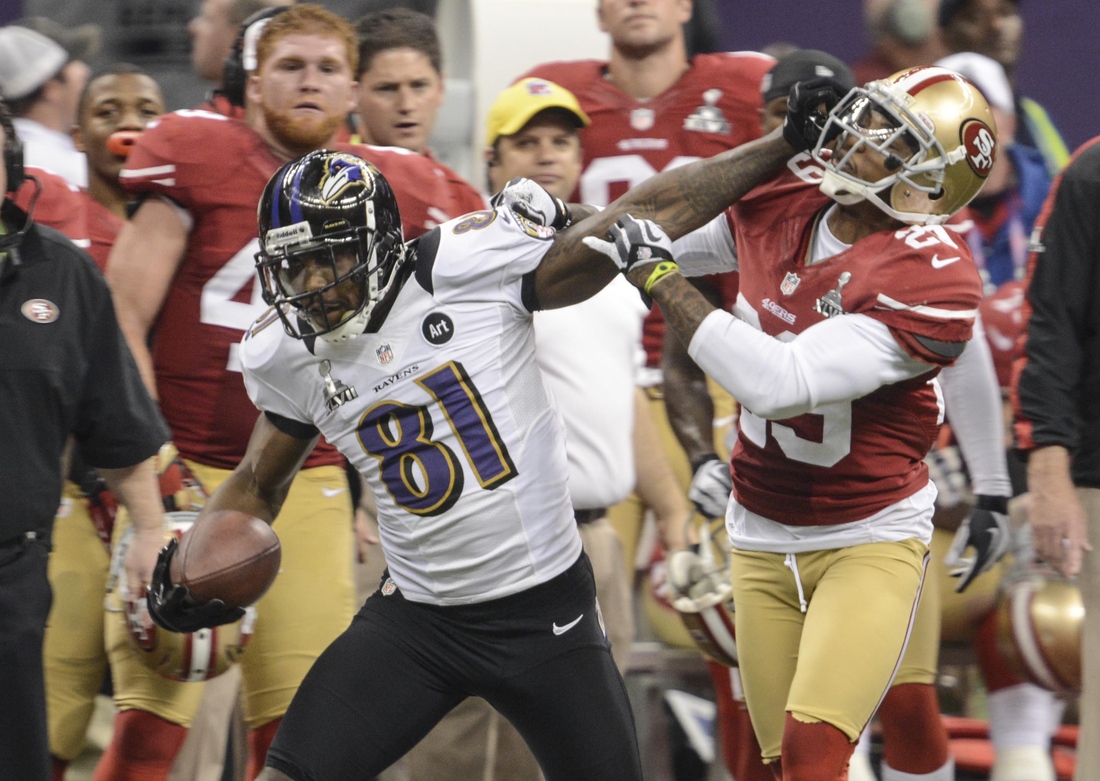 And just like that, Boldin will be packing his bags and heading out west to join a San Francisco squad that he helped defeat in Super Bowl XLVII. But even before that, Boldin tormented the Niners for years as a member of the Arizona Cardinals from 2003-09. Ironically, when Boldin was being shopped after the '09 season, the Niners were among those interested in his services. The Cardinals, not wanting to send him to a divisional opponent, dealt him to the Ravens instead. So the Niners finally got their man, albeit a few years late.

Many see this acquisition as spelling the end for Mario Manningham who may very well miss the entire offseason rehabilitating his knee. I wouldn't be so quick to make that conclusion. If the Niners had acquired a younger up-and-coming star like Percy Harvin or Mike Wallace, I'd be inclined to believe Manningham was on his way out. However, I view the Boldin acquisition in the same vein as Randy Moss last year. Whereas someone like Harvin or Wallace would have commanded a contract upwards of $10-12 million a year, Boldin comes at a comparatively more affordable price of $6 million in 2013.

Like Moss, Boldin is merely a veteran stop-gap, but the latter is younger and undoubtedly has more productive years left. For now, Boldin is a one-year rental, so to speak, but there is always the option of renewing a multi-year contract later on. You need not look further than this past postseason to see what Boldin can still do. He's a proven commodity and one that is affordable. And at the expense of a measly sixth-round draft pick, Boldin represents low risk, high reward. This is a classic Trent Baalke move.

Boldin was an integral element of Baltimore's vertical passing game. Case in point, take a look at his 2012 numbers compared to those of Michael Crabtree: 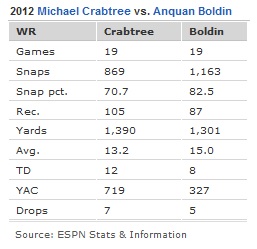 There are a couple of noteworthy observations. As Mike Sando from ESPN.com points out, there is a huge disparity in YAC yards, or yards after contact, with Crabtree's total more than doubling Boldin's. Secondly, take a look at the number of receptions for each receiver compared to their total yardage. Despite having 18 less receptions than Crabtree, Boldin recorded virtually the same number of receiving yards.

Both of these things can be attributed to Boldin's uncanny ability to get downfield (despite not being a burner). And as Fooch wrote about, Boldin can be incredibly effective in the run-blocking game as well - an ability that both Jim Harbaugh and Greg Roman covet in their receivers.

It's still early, but for now, here's how I view the pecking order:

What do you guys think? Do you feel good heading into the season with this group of receivers? Should the Niners add another one through the draft? Sound off in the comments section below.