Fooch's Note: Edelman was born in Redwood City and spent time at College of San Mateo. Could explain it, but still curious timing.

File this under who knows if it means something, nothing, or everything. As pointed out by MichaelClutchtree in our free agency open thread, Patriots free agent wide receiver and return man Julian Edelman has begun following the 49ers and wide receiver Anquan Boldin on Twitter. 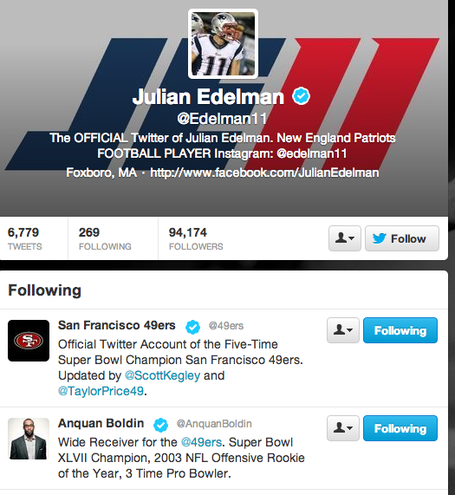 This screenshot shows the two most recent Twitter accounts he started following. It literally could mean nothing, but it's interesting to note nonetheless. He has been following a couple other now ex-49ers (Randy Moss, Dashon Goldson), but he is not following any teams other than the 49ers and Patriots. Maybe he's really good friends with Anquan Boldin?

For the most part, the general belief seems to be that Edelman will return to the Patriots. That doesn't mean something else is happening with the 49ers, but it means we should take all of this with a bit of a grain of salt.

Edelman has spent the last four seasons with the Patriots, and had his 2012 season end on injured reserve with a broken foot. During his time with the Patriots he has focused on special teams as a return man, but he has shown some modest possibilities as a receiver.

The 49ers are letting Ted Ginn Jr. look for work elsewhere, and it has seemed like the team is ready to let Kyle Williams and LaMichael James handle return work. If (big if) the 49ers were talking to Edelman, it would seem like he would be challenging those two for return work.

We'll keep an eye on this and see if it develops into anything more than just a passing fancy in 49ers tweets.