Scouting the top safety in the 2013 NFL Draft.

After electing not to place the franchise tag on Dashon Goldson, it was not a huge surprise when he departed for greener pastures this week.

Now we've got a whole host of rumors percolating about various options at the safety position. The 49ers have been connected to Ed Reed, Charles Woodson, Louis Delmas and Craig Dahl. While the future might clear up some in the coming days or weeks, many think the 49ers will target a safety in the early rounds of 2013's NFL Draft. The consensus top safety in the class is Kenny Vaccaro out of Texas.

It's unlikely that Vaccaro will be around at 31 when the Niners are expected to pick. If the team wants to replace Goldson with top safety they'll need to trade up into the mid-teens. Let's take a look a closer look at Vaccaro to see if he's worthy of a trade up. 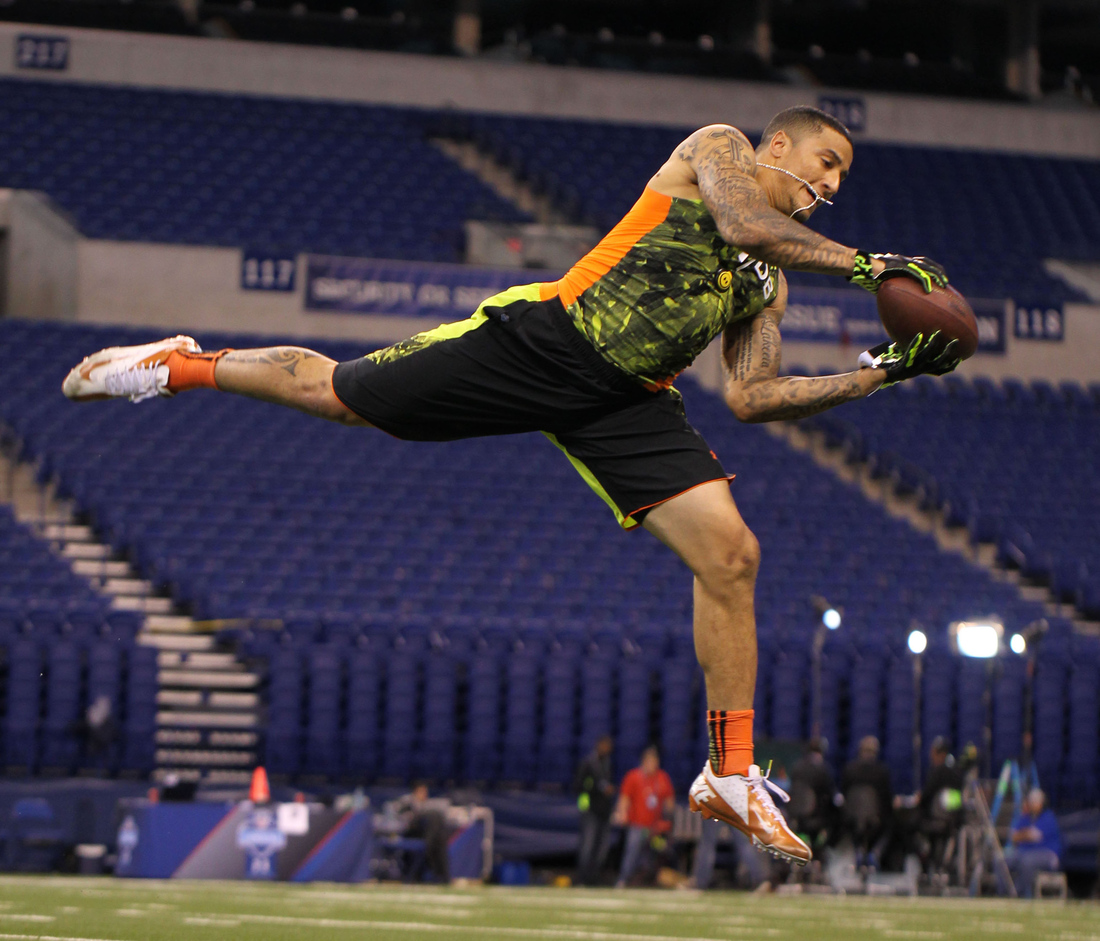 • Physicality: Vaccaro is like a linebacker trapped in a safety's body. He's a big hitter and has a lot of experience playing the box. He's an asset in the run game and fights hard to avoid blocks. Even when he plays in the box, Vaccaro understands containment concepts and aggressively takes on all blockers.

• Versatility: Vaccaro was asked to play the nickel back in three receiver sets. He did a tremendous job of holding his own against smaller faster receivers. Played crossing routes well and kept himself in good position to assist in run game. Vaccaro is also capable of playing either safety spot although he's primarily a free safety.

• Instincts: Vaccaro does a nice job of reading plays and making a quick diagnoses without much hesitation. Plays screens and quick passes well and seems to fly all over the field. Isn't a ball hawk, but his football intelligence allows him to gamble a little more but still put himself in position to defend the pass.

• Overly aggressive at times: Because Vaccaro has the awareness and skill set to gamble a little more than some, he can sometimes get has hand caught in the cookie jar. He has a tendency to peak into the backfield and lose his man. Conversely, when anticipating run he his susceptible to play action. His aggressive style of play also leads to missed tackles as he commonly goes for the big hit. Also plays with a bit of chip on his shoulder, which can lead to some personal fouls.

• Tackling: While I wouldn't consider Vaccaro to be a bad tackler his technique could use some work. He's doesn't wrap up to often instead opting to lower the shoulder and lay the lumber. When he connects, it's fun to watch. When he misses, it's frustrating. Needs to keep his head up and use his arms instead of shoulders.

• Ball skills: Vaccaro only intercepted five passes in 50+ career games at Texas. Lacks the make up speed to make up for mistakes and can often find himself getting beat down the seam by tight ends or running backs. Played more man coverage at Texas so zone schemes might take some getting used to.

Check out Vaccaro's film from a game vs. Oklahoma State below. You can check out other games vs. Kansas State, Ole Miss, Oregon State, and Texas Tech over at DraftBreakdown.com

Vaccaro seems to be the perfect replacement option for Goldson. While he's a little shorter, he plays just as fierce. He's quick to help defend the run and is a big hitter. His aggressive style mirrors that of Goldson although Vaccaro might be a slightly better pass defender.

Vaccaro seems to fit the aggressive, mostly man coverage scheme as well. The Niners want a free safety that makes an impact defending both the run and pass. Vaccaro can quickly diagnose run and short pass plays and was a very good nickel defender. He plays aggressively and flies all over the field.

While Vaccaro might be the best safety in the class, is it worth multiple draft picks to move up and take him? That's the only way the 49ers have a shot to land the talented safety.

The 49ers biggest issue down the stretch was defending the pass. While Vaccaro isn't terrible, he's also not the ball hawking safety the 49ers figure to benefit from. The comparisons to Goldson are good. But if it's not worth locking up your current All Pro safety is it ideal to move up in the draft to select a prospect with a similar skill set?

"While he has room to be more consistent breaking down in space, Texas' Kenny Vaccaro has a versatile skill set to be effective against both the pass and the run. He plays fast with a reckless abandonment and wastes little time in his movements..."

"Highly aggressive run defender. Flies to the line in run support, demonstrating a physical pop and generally reliable open-field tackling skills. Possesses the long, strong arms for the drag-down tackle, as well as good closing speed in pursuit and on the occasional blitz."

The year's safety class isn't as deep as some position groups but there is certainly a lot of talent to be had through the first three rounds. It's likely the 49ers use one or two early round selections on defensive backs including safety. My impression of Vaccaro is that he's a very solid prospect and worthy of being the first safety off the board. But in my opinion the distance between he and FIU safety Jonathan Cyprien and LSU's Eric Reid is not that big.

Vaccaro is an aggressive, big hitting safety. He's not a big playmaker in terms of causing turnovers but he flies all over the field and is almost always involved in the tackle. But at the end of the day, I don't see the Niners trading up to grab Vaccaro when they could grab a prospect nearly as talented in the second round.

Who's the safety you want to see the Niners take and when?