Armed with more draft picks than any other team in the league, the San Francisco 49ers were poised to make significant additions to a roster already full of talent. How did they do in the 2013 NFL Draft? Read on, Faithful.

How can you not love what the San Francisco 49ers did this weekend?

They filled positions of need, made some great value picks (especially in the middle rounds), and perhaps most importantly, invested picks with the long-term success of the franchise in mind.

The biggest hole on the roster was formed after the departure of All-Pro safety Dashon Goldson who took his talents to Tampa Bay. The Niners partially addressed the vacancy by acquiring free agent safety Craig Dahl who played for the St. Louis Rams last season, but Dahl seems more like an insurance plan than a three-down starter. If any rookie has a shot at cracking the starting lineup, it would be at the free safety position.

When the New Orleans Saints used their 15th overall pick to take the first safety off the board in Kenny Vaccaro from Texas, it seemed to spur the Niners into action. Three picks later, San Francisco traded up from the 31st pick, acquiring the Dallas Cowboys' 18th pick while also surrendering one of their two third-round picks (74th overall). They used that pick to select LSU safety Eric Reid. 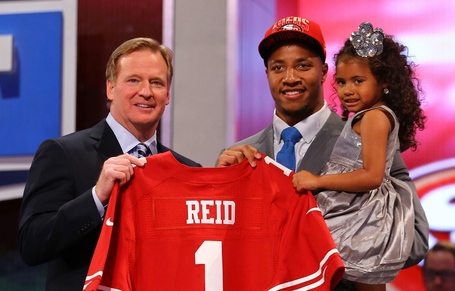 NEW YORK, NY - APRIL 25: Eric Reid (C) of the LSU Tigers holds his daughter Leilani as they stand with NFL Commissioner Roger Goodell as they hold up a jersey on stage after Reid was picked #18 overall by the San Francisco 49ers in the first round of the 2013 NFL Draft at Radio City Music Hall on April 25, 2013 in New York City. (Photo by Al Bello/Getty Images)

After being drafted, the Niners' newest safety intimated in multiple interviews his planned approach: "be a sponge."

"Just learn as much as I can from [safety Donte Whitner]. He's a vet, a guy that's going to show me how to be a professional athlete," Reid said. "I just want to come here and get to work."

Reid understands the concept of a "meritocracy" -- Jim Harbaugh's favorite word this weekend. He knows the starting job can only be earned through a lot of work and preparation. Matter of fact, he already started studying.

Upon being picked up from the airport by Niners' secondary coach Ed Donatell, Reid was handed a packet of defensive concepts and terminology. Reid spent the car ride back to Niners' headquarters paging through the book, and the sponge began to absorb.

"It's twelve-personnel," Reid shot back, without hesitation. "We already started getting to work. I can't wait."

Everybody has a draft crush. Mine just happened to be a hulking 6-foot-4, 280-pound lineman named "Tank." What's not to love?

Early on, Cornellius "Tank" Carradine was projected to be drafted high in the first round after amassing 11 sacks, 13 tackles-for-loss and 80 tackles through 11 games of the 2012 season. However, his rise up draft boards was stunted after he suffered an ACL injury that required surgery in late November, ultimately causing his stock to begin falling. 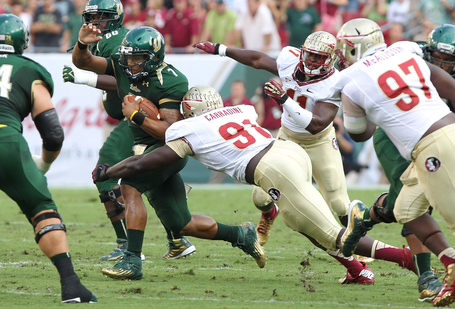 Just five months after undergoing surgery to repair his torn ACL, Carradine went through a private workout with eleven NFL teams in attendance. In addition to performing various lineman drills, Carradine also recorded an impressive time of 4.75 seconds in the 40-yard-dash. Carradine's message to the NFL: The knee's okay, guys. Really.

Niners defensive line coach Jim Tomsula received his message loud and clear. Tomsula, who can be seen several times throughout Carradine's workout video, was the one to call Carradine and welcome him to San Francisco.

Wish you could listen to Jimmy T talking to our newest Niner. Fired up doesn't begin to describe either side of the phone

"I'm very excited, really happy. It's a great moment and time in my life," said Carradine during a conference call with reporters. "I'm so happy right now, I don't know what to do. It feels really great. I'm just glad to be a 49er."

Watching Carradine's play at Florida State, one would assume "Tank" received his nickname for bowling over offensive linemen and crashing into quarterbacks. Nope.

"My mom gave it to me when I was a kid," admits Carradine. "I had this little army tank always with me. I could never go anywhere without that army tank. I just had to have it with me, and I used to always push people over, try to run over people and always had my army tank with me. So, that's how I got the nickname Tank."

Carradine is expected to play defensive end in the Niners' 3-4 defense, and it's safe to say the 273-pounder will have to put on some weight to do so. Remember that current San Francisco defensive ends Ray McDonald and Justin Smith weighed around 270-pounds coming out of college. Both are now closer to 290 to 300 pounds.

This move makes a lot of sense considering Justin Smith is approaching the twilight years of his career (a single tear rolled down my cheek as I typed that out). After the Super Bowl, Smith underwent surgery to repair a torn triceps muscle which he played through during the postseason. Smith turns 34 later this year.

Everybody knows the story of Marcus Lattimore. The running back had a prolific collegiate career at South Carolina where he rushed for a total of 2,677 yards and scored 38 total rushing touchdowns -- in spite of two devastating knee injuries that cut short his 2011 and 2012 seasons. The second occurred last October in a game against Tennessee when Lattimore dislocated his knee and tore three ligaments.

"Right after it happened, I doubted myself," said Lattimore. "I lost hope."

It's widely believed that, if it wasn't for Lattimore's injury history, he would have been a consensus first-round draft pick. In fact, former NFL general manager Charlie Casserly went as far as calling Lattimore the best running back in the entire draft even with his injured knee. 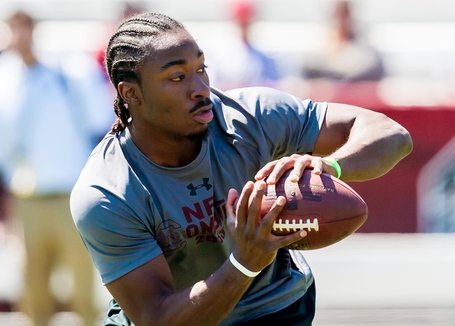 Many have linked Lattimore to San Francisco for months now -- a team with some guy named Frank Gore who had a similar experience in college.

Gore suffered two ACL tears during his career at the University of Miami. In spite of this, he was drafted by the San Francisco 49ers in the third round (65th overall) of the 2005 NFL Draft, and the rest was history. Gore went on to become the Niners' all-time rushing leader.

Assist to 49ers CB Chris Culliver, who put Frank Gore in touch with his former South Carolina teammate Marcus Lattimore after the injury.

Lattimore was put in touch with Gore after Niners' cornerback Chris Culliver, who also played collegiately at South Carolina, got Lattimore's number and gave it to Gore. San Francisco's rushing king called the despondent Lattimore to offer words of encouragement.

"He just asked me how I'm handling the situation because he's been through the same thing with the injuries and all," said Lattimore. "He just told me to keep a positive mindset. And that's what I've been doing these past five or six months. I feel like that's why I'm doing so well in my rehab."

Lattimore was effusive in his praise for Gore and even admitted that he sees a bit of himself in the Niners running back.

"I feel like we both run hard. He runs like nobody's there. He runs with total destruction," said Lattimore. "I feel like if I could compare my game to anybody, it would be Frank Gore. He's got low pads, he's got great vision, he can see the whole field. Great balance."

The Niners used their 34th pick in the fourth round (131st overall) to select Lattimore who many view as the heir apparent to Gore. Unlike Kendall Hunter and LaMichael James, Lattimore has the prototypical size you look for in an every-down back. Gore's contract expires after the 2014 season.

During a conference call on Saturday evening, coach Jim Harbaugh reveals that there's no rush to get Lattimore onto the field.

"I think if anyone can overcome what he's been through, it's him. It's Marcus Lattimore."

-- Rice tight end Vance McDonald was drafted in the second round (55th overall) to fill the void left by Delanie Walker who signed with the Tennessee Titans in free agency. Walker was the Swiss Army knife of the Niners offense; he blocked as a fullback, caught passes as a tight end, played in the slot, and even returned kickoffs, among other things. While Walker developed a case of the dropsies after his jaw injury in late-2011, he still offered a rare versatility to the 49ers' offense. McDonald has the speed and athleticism to be a more-than competent replacement. The 267-pounder spent most of his time at Rice as a slot receiver. 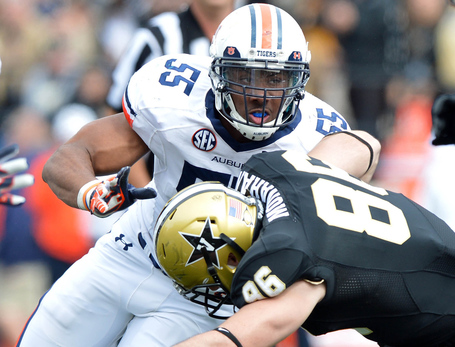 -- Auburn defensive end Corey Lemonier was my favorite under-the-radar selection. Admittedly, I knew very little of Lemonier (pronounced "lay-moan-YEY") leading up to the draft, but after doing a bit of research and watching some videos, he reminds me of a more explosive Ahmad Brooks. The Niners' pass rush offered little variation over the last two years. That seems to be changing this year with the addition of Lemonier and Carradine. And don't forget about Darius Fleming and Cam Johnson from last year's draft.

-- I'm very impressed with what I've seen from fourth-round pick Quinton Patton, the Louisiana Tech receiver, and I can't wait to see how he fares in camp. On paper, the Niners' receiving corps seems crowded, but remember: there's no guarantee that Michael Crabtree can/will be resigned. Mario Manningham and Kyle Williams are both returning from injuries. Ricardo Lockette sounds promising but hasn't shown anything yet. Anquan Boldin can be a productive possession receiver, but he's getting older. And A.J. Jenkins has plenty to prove that he was worthy of the first-round selection from a year ago.

-- Watch some tape of South Florida quarterback B.J. Daniels, and try to tell me you don't see a bit of Russell Wilson. Stature, throwing motion, and running style are all very similar. Jeff Deeney from Pro Football Focus posed an interesting possibilty: could the Niners be envisioning Daniels as their scout team version of Wilson? Between Daniels, Colt McCoy, and Scott Tolzien, there will be plenty of competition in camp for the backup quarterback job. For your viewing pleasure, here's a highlights video (I know, I know! "Highlights" aren't really an accurate representation of a prospect, but it's still pretty damn entertaining).

-- On Friday, the Niners continued to prove their willingness to trade back for future picks. San Francisco originally held the 34th overall pick, the same one they acquired from the Kansas City Chiefs through the Alex Smith trade. However, they ended up trading back six spots with the Tennessee Titans, in turn acquiring Tennessee's third-round pick for next year. For now, the Niners have ten draft selections, three of which come in the third round of next year's 2014 NFL Draft. That's not including any additional compensatory picks the team may receive.

Obviously, it's way too early to tell how we did (or any other team for that matter). I refuse to assign some arbitrary letter grade, but I'll put it this way -- I haven't felt this optimistic about a draft class in a long time. I don't know if the Niners could have done much better, to be honest. The only thing I can say with 100-percent confidence: It'll be a very intriguing offseason.

How do you think we did? What's your grade on the 'Class of 2013'? Who was your favorite selection? Sound off in the comments section below.