The 2013 NFL Draft is only a few days gone, but that won't stop us from taking a very preliminary look at the 2014 NFL Draft. Plenty will change between now and then, but there is some useful information to be had, and some mildly amusing content to consider.

What 13 Picks Can Turn Into 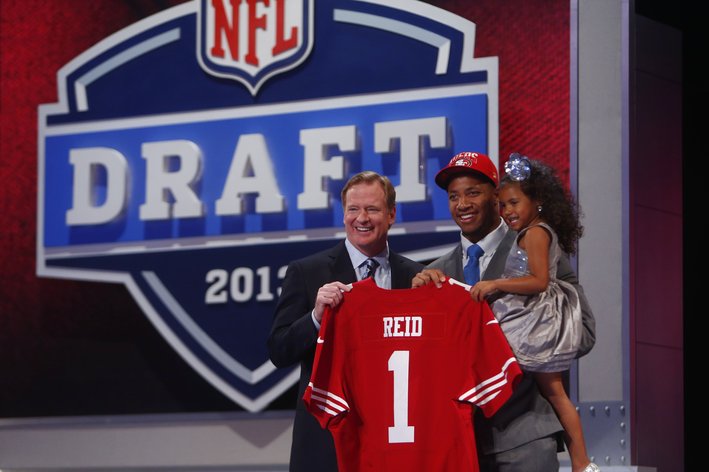 As the 49ers look ahead to the 2013 season and the 2014 NFL Draft, the team is in position for another sizable haul of draft picks. The 49ers hold their own seven picks, plus three additional picks. Last year, they acquired a seventh round pick from the Carolina Panthers in exchange for safety Colin Jones. This past March they acquired a conditional mid-round pick for Alex Smith. It is being reported as a third round pick that could turn into a second rounder based on Alex Smith's playing time and the Chiefs success. Finally, the 49ers acquired a third round pick from the Tennessee Titans when they moved down in the second round and selected Cornellius Carradine.

The 49ers have a chance to add an eleventh pick for Dashon Goldson's departure in free agency. Although the 49ers had an even balance of players arrive and depart, Goldson's value should be high enough to net either a third or fourth round compensation pick. My early guess is that it will be a fourth, but we'll have to wait and see.

The wrap of the 2013 NFL Draft also means everybody posts their first mock draft for the 2014 NFL Draft. It will be way off a year from now, but it's still amusing to consider. A good example of that would be Matthew Fairburn's 2013 SB Nation NFL mock draft late last April. After today, I have no plans on looking at 2014 mock drafts for hopefully nine months. It may happen sooner, but ideally we will stay away from the topic for a while.

Dan Kadar posted his first 2014 NFL mock draft, and he had the 49ers drafting Oklahoma center Gabe Ikard. Anything is possible at this point, but with the team getting center work for Daniel Kilgore and Joe Looney, ideally they will be in a position to replace Jonathan Goodwin when the time comes.