Kyle Williams sent out some positive news about his injury rehab via social media.

49ers wide receiver wide receiver Kyle Williams has been rehabbing from his November ACL tear, and it sounds like he received some pertinent clearance today. Earlier this afternoon, he posted this picture on Instagram: 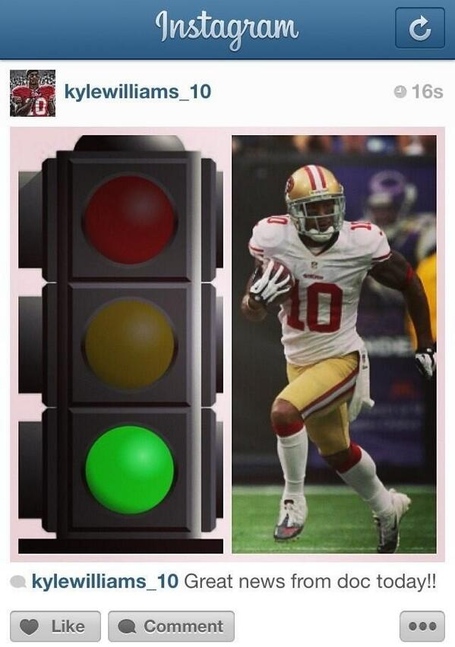 After sending out this picture, he tweeted that he was still taking things easy because it was still a long way toward the season. But he expects to be fully ready for Week 1 of the 2013 NFL season.

Williams indicated at the Super Bowl that he expected to be ready for the start of training camp. He felt he could do more during OTAs and minicamp, but the doctors wanted to play it safe and make sure he was back at 100% by the start of camp.

This offseason, Anquan Boldin, Quinton Patton and A.J. Jenkins have all been the focus at wide receiver, but a healthy Williams will provide plenty of competition in camp. Even with Mario Manningham potentially missing some chunk of training camp, the competition will be extensive. After Crabtree and Boldin, there are a lot of players competing for only so many looks. The 49ers will use plenty of three receiver sets, but with Williams, Patton, Jenkins and even Ricardo Lockette among those in the mix, who will win out?