My NFL QB Projections, and How You Can Help

Last season, I started working a system for QB projections. This season, I'm trying to take it a step further, and I need your help.

Share All sharing options for: My NFL QB Projections, and How You Can Help

What follows is a layman’s tour through STATISTICS PARK, in which I, the layman in question, at first marvel at the DVOAlbertasaurs and later, when the electric fences fail, try not to be eaten by any of the DYARodactyls that somehow evolved in this god-forsaken land. The truth is, this whole adventure sounded fun at first. But if there’s one thing I’ve learned along the way, it’s that Stats Will Find A Way. Stats. Will. Find. A. Way.

Actually, I’m not going to take on any of Football Outsiders hallowed ground. I’ll leave that to Florida Danny. But I am inviting you into the land of mildly advanced stats. See, last season I began to develop a simple system for projecting QB productivity for the coming season (lots of detail you may or may not want to deal with in that link). The original system lacked polish, but produced good enough results to leave me encouraged about it’s usefulness. The principles were simple:

That’s it. Use a QB’s statistical averages from the last three seasons to project the upcoming one. To start, that’s almost all you need to know. For those more interested in the details, I’ve gone ahead and tried to explain things -- and particularly some of the quirks of the system -- more fully after the big picture.

Quickly, though: Yes, these projections do show 44 QBs with 500 pass attempts. No, I do not project that 44 QBs will end the year with exactly 500 pass attempts. The pass attempt number is not what I’m interested in projecting here. The trick is that I’m not trying to answer the question, "What will this guy do in 2013?" Rather -- and it’s a subtle distinction -- I’m trying to answer the question, "If this guy plays enough to qualify in 2013, how will he perform?" So, if he does not play enough to qualify, then the projection doesn’t matter. And if he does, then I can simply adjust the pass attempts to match. More on all of that lower down.

What I’m hoping you’ll help me with is figuring out how to adjust the projections for guys who do not have the reliability of a full three-year sample to project from (rookies, first-, second-, or third-year starters, guys coming off of injuries, guys who haven’t started in a while etc.), and to try to help me identify players who may be in line for abrupt changes in productivity due to changes in the coaching or personnel around them (Sam Bradford and Matt Ryan were good examples of this artificial bump from last season).

For some of these low-sample players, I want you to know where I’m coming from, though, because they may seem odd. For rookies, I simply made projections for all QBs drafted in rounds 1-4. I did that to simplify the selection process, not because I actually expect Nassib to supplant Manning. To project rookies, I tried to find similar rookies based on Football Outsiders’s yearly Lewin projections. I also based the projections for rookies on the assumption that if they do play enough to qualify, and especially if they’re not first-round picks, it’s because they’re playing better than a particular awful rookie floor that would get them benched.

Similarly, I wanted context to help me project second-year starters, and the like, so I went through a while ago and pulled together some historical comps, some of which worked out better than others, as you might see in that link. I used those comps to guide those projections.

Here’s the full chart, complete with all the rates. Feel free to ask me about anything if it looks like I’ve made a mistake -- that is possible. It’s pretty interesting. At least, I think it is. And it can be improved with your help. Please help me improve it. 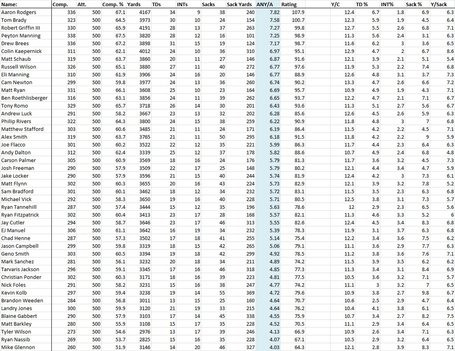 Now, the meat of this post is out of the way, and I invite you to just jump to the comments and go at it. If, however, you don’t mind reading more, the rest of the post is going to be dedicated to more fully explaining the system, its quirks, its challenges, and the solutions I’ve tried to implement.

There were other questions to be answered, though.

And if you’ve come with me this far, thanks for reading. I’ll leave you as I started you, in Statistics Park.

After a harrowing night in which many cliche-spouting pseudo-analysts were lost to the vicious jaws of the terrible statisaurs that broke loose the evening before, our hero emerges unscathed. That is, unscathed physically, minus a few scratches. The truth is, he’ll never fully recover from the trauma of those events, but at least he made it out alive... for now.