The NFLPA is running their second annual Rookie Premiere event down in LA. The San Francisco 49ers have a few representatives enjoying themselves in Southern California.

The NFLPA Rookie Premiere weekend is currently going on down in Southern California, and some of today's events took place at the Los Angeles Coliseum. The weekend is a chance for rookies to meet the media, get pictures taken for football cards, and generally have a good time.

49ers wide receiver Quinton Patton, tight end Vance McDonald and running back Marcus Lattimore are all down for the event. They will return to Santa Clara for OTAs this coming weekend, but for now they get a little fun time.

SB Nation is helping the NFLPA promote this event, and so some of our people have gotten some great access. SB Nation's Ryan Van Bibber (who also runs Turf Show Times) is interviewing a variety of players. Additionally, Dan Rubenstein, who does a lot of video content for SB Nation, is down there helping on the video end.

Ryan shot a few videos using the Vine app. For those who have never used it, you can take up to six seconds worth of video. You obviously can't get much content from six seconds of video, but it is great for Twitter. Ryan shot some videos and I thought they would be fun to share. Scroll your mouse over the videos and you'll see an option to unmute them.

This first video features Quinton Patton shouting out a quick line from one of the funniest movies of all time.

I'm not quite sure what Quinton Patton is doing in this second video. I'm trying to find out, but it seems funny anyway.

Dan took several pictures of the players. This first one is Marcus Lattimore coming out in his 49ers uniform with pads. 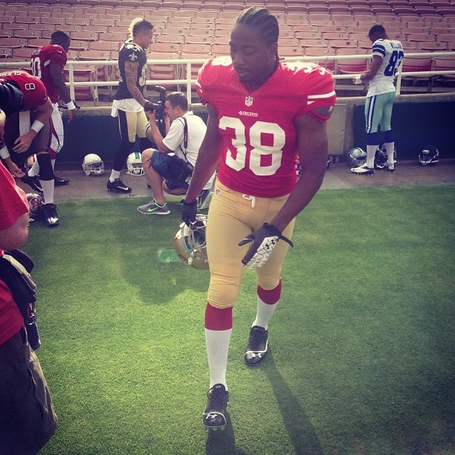 This second picture is Quinton Patton in his uniform. I'm still not sure why he goes with the vertical eye black instead of horizontal. Any ideas? 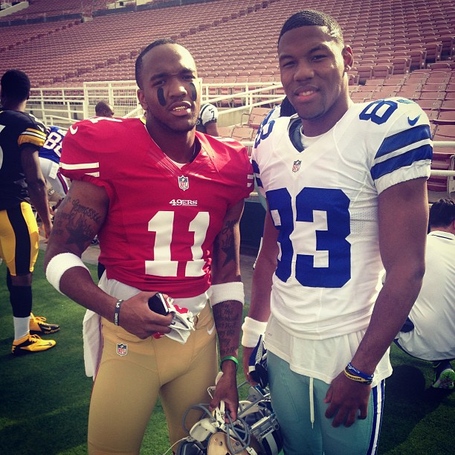 This final picture features Quinton Patton and Landry Jones "just cuddlin' in a cabana and stuff". 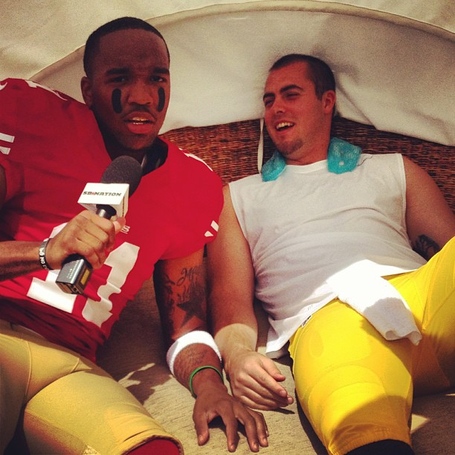 This is another picture in the cabana! 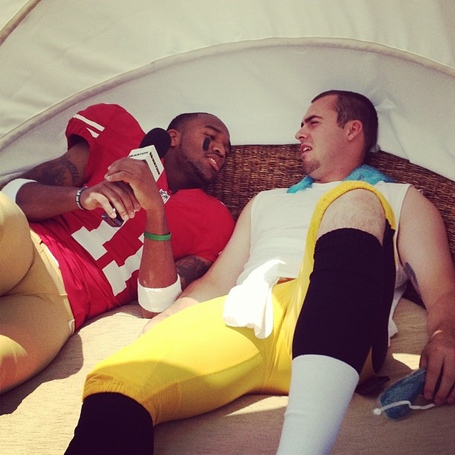 You can follow all of SB Nation's coverage of the rookie premiere at this link.