Thinking of Jim Harbaugh: Seeing if 'Akinator' can guess the 49ers coach

I tried to stump a character-guessing robot with Akinator, and we came close to uncovering the truth about Jim Harbaugh (spoilers: he's two different people fused together).

Share All sharing options for: Thinking of Jim Harbaugh: Seeing if 'Akinator' can guess the 49ers coach

As a longtime resident of The Internets, I've grown fond of 'The Web Genius' -- Akinator. It's a bot at this website that basically plays 20 Questions with you and tries to guess what character, real or fictional, past or present, that you're thinking of.

Over the years, Akinator has done some pretty impressive stuff, from guessing "Papa John," when I admittedly knew nothing of the guy or the fact that he existed at the time, to determining the non-red, blue or orange Pokemon I was thinking of was, in fact, Spoink.

Last night -- or more accurately, this morning -- at around 4 a.m. ET, I was feeling bored, so I pulled up Akinator on my Nexus 4 and decided to see if he could guess the San Francisco 49ers head coach: Jim Harbaugh.

Now, the way this works is Akinator will ask me some questions and eliminate people from its database based on my answers and in the end, hopefully there will only be one possible outcome. I can answer Yes, No, Don't Know, Probably and Probably Not. Here's how it broke down.

Has your character really existed?

What an interesting, profound question to kick things off. I mean, do any of us exist, or are we all just part of some greater cosmic imagining? Maybe Jim Harbaugh is the only person who actually exists and we're all just the voices in his head. Maybe .... maybe I'm thinking about this too much. I went with Yes for this one.

Is your character female?

This question was quite a bit easier than the first. Barring some unknown personal information, I feel confident in my No answer.

Does your character have children?

The spawn of Harbaugh will probably go on to coach multiple Super Bowl-winning franchises. In fact, I move that the 49ers don't move on from Jim until his kids are ready to take over. That's right, we're keeping our head coach until an heir is named. Yes.

Is your character dark-skinned?

Well this one was easy. Harbaugh is pretty pasty. No.

Is your character dead?

Unless the Earth as we know it is directed by M. Night Shymalamawhosyamamalan and we've got some unexpected twist, Jim Harbaugh is most certainly alive. Full of life, in fact. No.

Is your character an actor?

Sometimes I feel like Harbaugh is an actor. He goes up there for his press conferences and he talks to the media, giving the minimum amount of information required by the NFL at this point. He pretends to have information for us. But No, Jim Harbaugh is not an actor. Maybe after he retires (with six or seven Lombardis to his name, of course).

Is your character linked with sports?

This is where Akinator smells blood. He's got me locked down and he's going to start firing off sports-related questions. Considering he has hundreds/thousands of coaches and tens of thousands of professional and amateur athletes to work through, I'm still feeling confident I can stump him. Yes, Jim Harbaugh is linked with sports.

Does your character currently play in a team?

Outside of the fact that I do honestly believe Jim Harbaugh would write himself into specific plays if he was actually allowed to, No, he does not currently play "in" a team.

Is your character's fame linked with football?

OH GOD, AKINATOR IS GONNA GET THIS! Naaaah, he's on the right track but there's an endless number of past and present players and coaches to pick from. Yes Harbaugh is linked with football, you crazy genie, you.

Is your character a sports coach?

Well this narrowed it down a good bit. Yes, Harbaugh is a sports coach, but it didn't ask me if he was a head coach so there are still tons of names at the professional and college level likely in the database.

Is your character American?

With one fell swoop, Akinator has eliminated most of the CFL and other international leagues. I'm sure there's plenty of coaches in the NFL who aren't American, as well, though I can't seem to think of any right now Apparently that Marc Trestman fella from the CFL is American as well. Yes, Akinator, Harbaugh is American. AS AMERICAN AS IT GETS, IN FACT!

Is your character retired?

No, not for another thirty years and 29 Super Bowl victories (2024, Harbaugh will get ejected from the Super Bowl after reaching into the chest and ripping out the heart of the head referee after calling "illegal formation," for the eighth time. Rules shouldn't get in the way of Harbaugh's genius).

Did your character gain weight over their career?

Aside from stress eating here or there, Harbaugh has maintained a small amount of healthy flab. We've seen this on occasion, as he's prone to such jittery, sudden movements that his body often moves before his clothes can catch up. So we'll just go with No.

Does your character work at a university?

Is your character linked with driving?

This one is an interesting question. For one, Harbaugh is linked with IndyCar to some extent -- but I figured Akinator wasn't aware of this and picked No.

Is your character linked with the color blue?

Does your character wear green?

Is this what we're doing now? Has Akinator narrowed it down to the NFL and now he's eliminating teams based on uniform color? If so the Tennessee Titans, Buffalo Bills, New York Giants, Philadelphia Eagles, Seattle Seahawks and a bunch of other teams were just eliminated. No.

Does your character personally know you?

Is your character a fusion of two people?

WHO COULD YOU POSSIBLY BE ELIMINATING WITH THIS QUESTION AT THIS JUNCTURE? This question baffles me because it's the first time I've ever seen this question -- including one time when I was actually thinking of fused characters (12-year-old me says "DBZ represent!") -- so that's weird. We've got an American football coach not associated with blue or green and Akinator is wondering if my character is some horrid scientific abomination or a Siamese twin. Um, let's go with No.

Is your character linked with the color red?

Does your character live in California?

Well, considering the 49ers are a football team, not at a university, in California and wear red, it's pretty obvious that Akinator has this one down. He's going to guess Jim Harbaugh next. Yes.

Does your character have a mustache?

But wait! He asks another question! Apparently, after confirming that my character is a head coach of a team that wears red in California in a professional football league who is also not a fusion of two different people ... Akinator asks whether or not my character has a mustache. My guess is that he needed to eliminate the real brains behind the 49ers organization, Jim Tomsula. Either way, No. 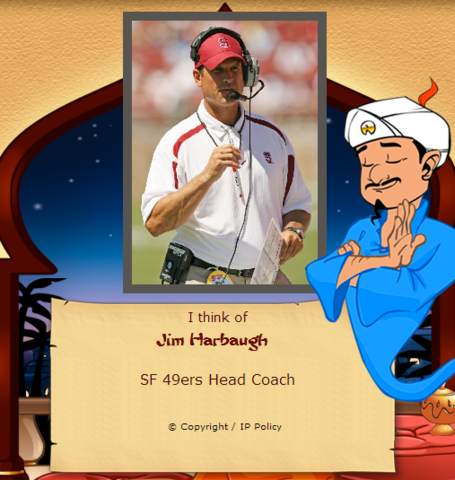