We break down the NFC West by position, starting with the tight end position. The San Francisco 49ers lead the way with Vernon Davis and high-potential rookie Vance McDonald. Is it the right choice?

There's nothing like a little uniformity to get us through an otherwise boring offseason. When I'm sapped of creativity, I like to make comparisons and lists, as you might be able to tell from the power rankings I posted yesterday.

My next project will be to break down the NFC West by position. The division is up for grabs, though there's really only two teams in the race for it: our San Francisco 49ers and the Seattle Seahawks. I think we're all hoping that the Seahawks crash and burn next season, and that all the hype is unwarranted, but I have to say, in my preliminary breakdowns, it's hard to make that a defensible position.

In other words, taking a look at position-by-position, you may not like what the end result looks like. But before we get ahead of ourselves, we'll start with just one position: tight end. Let's take a look at the position within the division. 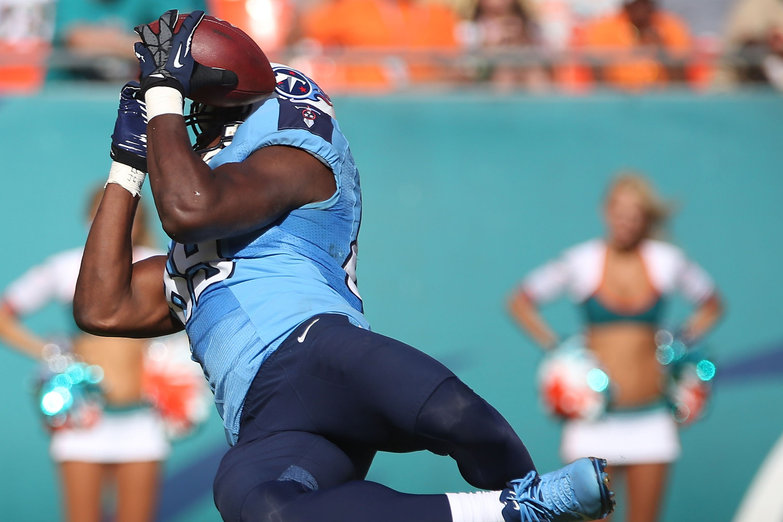 Jared Cook Jr. is an intriguing young player. He's a lot like Delanie Walker but probably has a higher ceiling, and if he fulfills his potential, then Sam Bradford will have a real talented target to reliably move the sticks.

The only issue, at this point, is that the Rams paid an awful lot of money for him. He's got a $4 million cap hit in 2013, but that increases to $7 million in 2014, and then $8 million for the remaining three years of his contract. Given that he's never had more than 1,000 yards in a single season, those numbers are really out there.

Still, many feel that the Titans didn't use him properly, trying to get him on the outside covered by cornerbacks instead of creating mismatches up the seam and over the middle against linebackers. He'll probably be a handful for Patrick Willis and NaVorro Bowman.

This isn't a hard position to defend at this point, especially if McDonald pans out into half the tight end that experts believe he can. The position took a hit with the departure of Delanie Walker, but his abilities in the passing game were waning over the past couple seasons.

You don't rank the tight end position on blocking proficiency, even if Walker and Vernon Davis were among the top two tight ends in the NFL at blocking. Walker signed with the Tennessee Titans, and he'll probably have a good career there. McDonald will step into his role, with a higher ceiling, especially in the passing attack the 49ers want to employ.

But getting into it, Davis is far and away the best tight end in the division. He had something of a down year last season, but despite being kept in to block an awful lot, he had 548 yards and five touchdowns, with an average of 13.4 yards per reception. With another year of Colin Kaepernick progression, I think most of us expect Davis to re-emerge as one of the top receiving tight ends in the league.

With the NFL, leaning toward a two tight end offense, the only team really steering in that direction in the division is the 49ers.

When the Seahawks got Miller, there was a lot of talk about how he was one of the better tight ends in the NFL, but so far in his two seasons, he hasn't surpassed the yardage of even his rookie season with the Oakland Raiders. He had just 396 yards and three touchdowns in 16 games last season, but that doesn't mean he should be overlooked.

No, until further notice, Miller is still among the NFL's elite, provided the Seahawks actually use him. His window might be closing, but the fact remains that he is one of the more reliable targets in the division and Russell Wilson surely appreciates that.

McCoy could be on the verge of breaking out sometime soon, with 291 yards and three touchdowns last season, but for now, he's more of a backup and less of a two-tight end set kind of guy. He has the tendency to disappear at times, but who knows, this could be the year he breaks out!

Lance Kendricks looked like he might be breaking out in 2012, and to a certain extent, he did. He had 519 yards and four touchdowns, with an average of 12.4 yards per reception. That said, he doesn't seem to have that high a ceiling, or at least, that's just my read on him. I've felt like Kendricks might be more of a No. 2 tight end than a No. 1, and if the thing works out with Jared Cook, then that will be the case.

The Rams have the potential to have the best group of tight ends in the division, but until we see more from both Kendricks and Cook, this is the proper ranking for them, in my opinion.

The Cardinals have been without serious tight end talent for some time now. For so long, that offense has been predicated solely on wide receiver Larry Fitzgerald, and the fact that Jeff King and Rob Housler are the top two tight ends is just ... sad.

Housler wasn't terrible last year. He had 417 yards and no touchdowns, while King had 129 yards behind him. Housler was a third-round pick in 2011 and could pan out to be a pretty decent tight end when its all said and done, but like Kendricks in St. Louis, he looks more like a No. 2 than a starting tight end.

Arizona hasn't been serious about the tight end position and it shows. They lack a big, consistent and reliable target to go over the middle. They have the worst group of tight ends in the division and that likely won't change one bit in 2013.