Alex Boone is having a rhino named after him. I don't think there will be anything more random this offseason.

Share All sharing options for: Alex Boone to have a black rhino named after him at the San Francisco Zoo

If you were looking for the ultimate NFL offseason story, I present to you, a rhino naming! This Friday, the San Francisco Zoo is naming a black rhino after 49ers guard Alex Boone, simply calling the rhino "Boone".

The naming comes as part of a bigger program involving Boone (the guard, not the rhino). Boone and his family visited the Zoo in 2012 and apparently became fascinated with a four-year old black rhino the zoo had acquired. Boone offered his services to the Zoo, and eventually a collaboration was born. The Zoo created the Alex Boone Animal Education Project to bring local at-risk youth to the zoo. In response to Boone's assistance, the Zoo will name the black rhino after him.

If you're in the Bay Area, at 3:00 p.m., Zoo visitors are going to be able to check out the black rhino exhibit and see Boone the right guard feed Boone the black rhino. Boone had a few comments about the project:

"There are very few black rhinos left on this planet, so to have one named after me is truly an honor," said 49ers guard Alex Boone. "It's awesome to share a close connection with a black rhino, but it's even better that we can raise awareness for these endangered species through the Alex Boone Animal Education Project."

It's amusing, but it's also a cool way for Boone to use his celebrity to help educate people. Here's a picture Boone with Boone (courtesy of @49ers on Twitter): 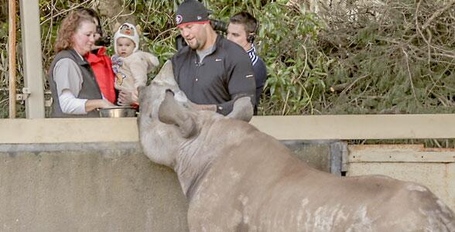