We are mere months away from kickoff. Let's take a look at some of the storylines we can expect each week.

If there's one game this season that players have circled on their calendar, it's this one. After all, it was the Seattle Seahawks who routed the San Francisco 49ers to clinch a playoff spot last December. And it was a rout in the worst way.

If there was ever a "Niner Killer" these days, it would be Marshawn Lynch who rumbled for a pair of touchdowns in the first quarter alone. Russell Wilson threw a career-best four passing touchdowns. The Niners didn't even sniff the end zone until 1:40 left in the game when Colin Kaepernick found Delanie Walker for a touchdown. But at that point, it was to salvage whatever dignity was left on the field.

It was not one for the faint of heart, to say the least. And if you think either side have extended an olive branch at any point this offseason, you're dead wrong. 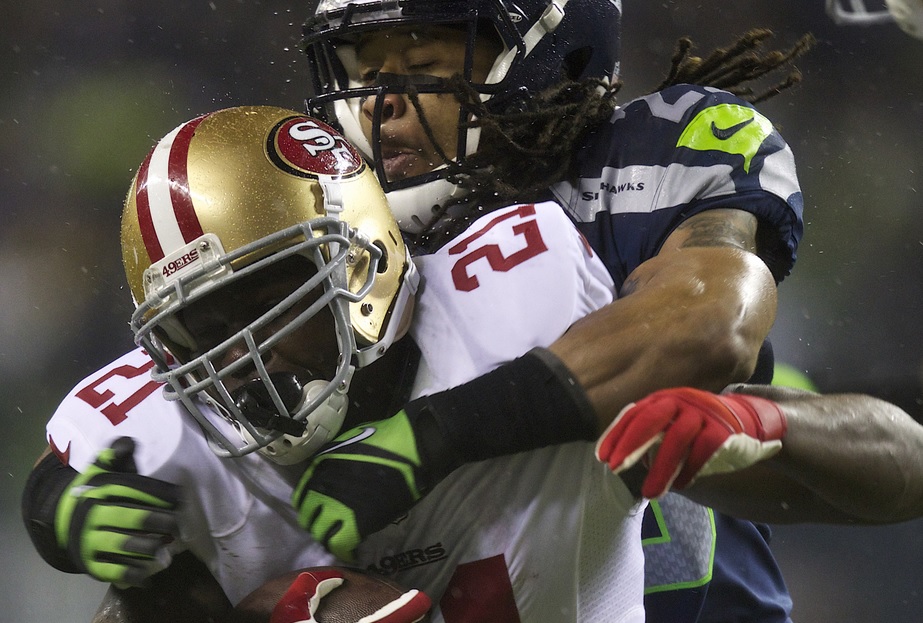 SEATTLE, WA - DECEMBER 23: Frank Gore #21 of the San Francisco 49ers is tackled by Earl Thomas #29 of the Seattle Seahawks during a game at CenturyLink Field on December 23, 2012 in Seattle, Washington. The Seahawks won the game 42-13. (Photo by Stephen Brashear/Getty Images)

It seems like a flock of Seahawks have been getting busted lately for performance-enhancing drugs (PEDs). Earlier this week, Niners head coach Jim Harbaugh spoke up on the matter.

"Play by the rules," said Harbaugh. "You always want to be above reproach [...] because if you cheat to win, you've already lost."

Just a few days later, Seahawks cornerback Brandon Browner, a guest on Sports Radio KJR in Seattle, was asked about his thoughts on Harbaugh's comments. Let's just say the disdain was reciprocated.

"He’s never gonna be out there lined up against me," said Browner. "I wish he would. I’d put my hands around his neck."

If you ask me, it feels like the Niners and Seahawks are tussling into the NFL's newest, fiercest division rivalry. Move over, Steelers/Ravens! And it certainly helps that the head coaches hated each other before they even arrived to their respective NFL teams. Any Niners fan in the know has heard about the "What's your deal?!" fiasco, but in case you haven't (or wish to relive it)...

You know what really makes a good rivalry great though? When both teams are actually good. And the Niners and Seahawks are both damn good teams. Hell, they were damn good last year before the arms race this offseason with all of the free agent signings, trades, and draft picks.

Seattle added one of the most coveted offensive weapons in the league with the trade for Percy Harvin. And to balance the scales, they added Cliff Avril, Michael Bennett, and Antoine Winfield to the defensive side. Not to be outdone, the Niners made a trade for veteran receiver Anquan Boldin and signed Glenn Dorsey and Nnamdi Asomugha. And both teams had very strong drafts to boot.

Offseason power rankings--if that's your thing--can't seem to make up their minds as to who's #1 and who's #2. While the Niners and Seahawks are discussed almost interchangeably in the discussion of the league's top dog, I happen to agree with ESPN SportsNation's recent poll... 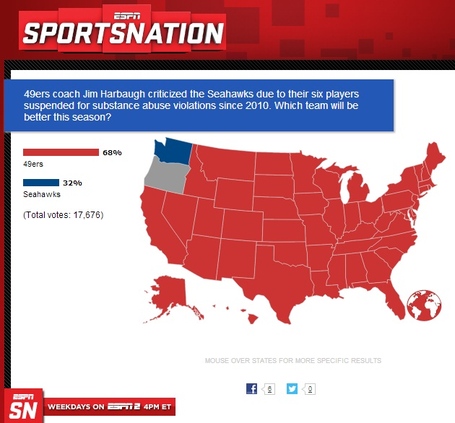 Just kidding! But seriously. It's going to be a great game and a great rivalry for years to come. And what's better than two teams that hate each other's guts? Having the whole country watch them tear each other apart on Sunday Night Football. No pressure, guys!