Thoughts on Colin Kaepernick and the Jim Harbaugh Offense

What is the "evil plan" of San Francisco 49ers Head Coach Jim Harbaugh and Offensive Coordinator Greg Roman? And how will the plot thicken in 2013?

Share All sharing options for: Thoughts on Colin Kaepernick and the Jim Harbaugh Offense

While going through the last few seasons researching the ever-growing popularity of the pistol offense and the read option, I stumbled upon something very interesting. 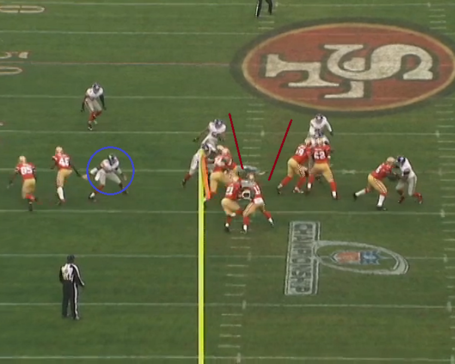 This is a still of Alex Smith running the read option. Okay, nothing crazy there. It's against the New York Giants and we played them this year where we utilized the read option with Colin Kaepernick as well.

Except maybe you will notice the logo on the field. Not the "SF" one, the one below it. It says "Championship."

Yes, this is a still from the 2011 NFC Championship Game where the 49ers lost to the Giants in overtime.

This is a still of Alex Smith running the read option in the 2011 playoffs.

It might not be a huge, "whaaaa???" moment for you, but it was for me. He reads the defender in blue and hands the ball to Gore to run through the lane highlighted by red lines. 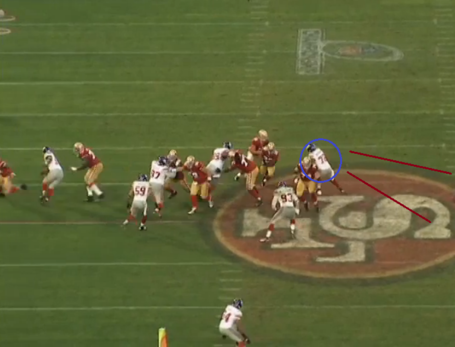 Again, Smith reads the defender in blue. This time, he elects to keep it himself and runs outside. 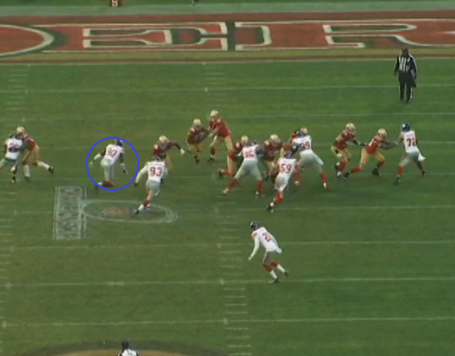 Same thing here. Read the defender in blue and either hand it off or run with it yourself. 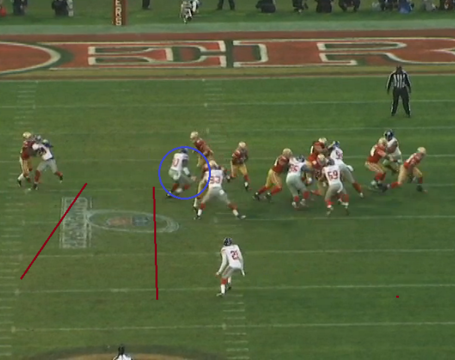 Smith again decides to keep it himself, running around the New York defender who has over-committed to Gore. That leads to this: 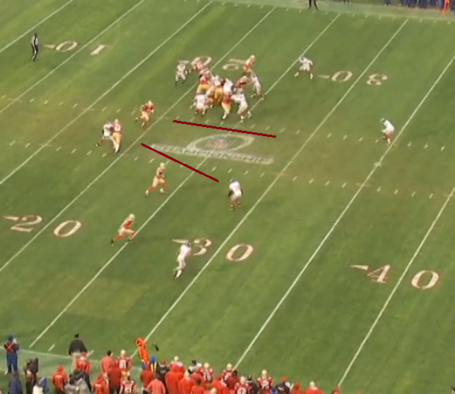 In 2011, before 98% of the football world had even heard of the pistol, or the read option, the 49ers were calling for Alex Smith to utilize the read against the New York Giants in the freakin' NFC Championship Game.

This revelation provides new evidence to the thought that San Francisco Head Coach Jim Harbaugh and Offensive Coordinator Greg Roman have had an evil plan all along: they want to bring the pistol and the read option to the NFL and they believe it can be successful.

They went and got their guy, Colin Kaepernick, who was running the pistol with its "creator", Chris Ault, in Nevada, and, while waiting for an opportunity to put their project on stage, they tested it out with Alex Smith.

If this has been the "plan" all along, then what does it say about this team's philosophy, and what does it imply going forward for the offense?

Well, let's ruminate for a bit on the evolution of the Harbaugh offense from its inception in San Francisco until now and see if we can figure anything out.

In 2011, the first year of the Harbaugh/Roman offense, we featured a "take whatever you can get" offensive scheme behind a bad offensive line, a lack of receiving threats, no off-season to install the scheme, a couple of the "greatest defensive performances I have ever seen!", and a lot of "CLUTCH! CLUTCH!"

San Francisco would have won a Super Bowl in 2011 if they had a decent o-line and some receivers. Harbaugh and Roman lived by the edge in their game-plan because they had to. The 49ers won close games through 4th quarter comebacks, last-minute defensive stands, and David Akers making field goals.

Eventually, however, that life-style is bound to hurt you -- and probably not at the right time. You cannot win close games forever.

It almost hurt San Francisco in the NFC Divisional Round against the Saints, where the defense finally failed to make that 4th quarter stand against a prolific offense in a game where the San Francisco offense should have already put it out of reach long before then.

Then, in the NFC Championship Game, a 4th quarter comeback went the wrong way for good, and the offense could not engineer a response. Our reliance, too, on the higher-variance role of special teams play bit us hard.

That gives us the two main problems of the 2011 offense:

1) Too much reliance on defense. Our defense had to be historically great to win 13 games that year. If it was just "good", then we win much less than that.

That is okay if your defense is keeping people to 13 points every game. But, eventually, you will need your offense to stop playing conservative and put up some points to win. And you cannot consistently rely on unsustainable 4th quarter comebacks, or game winning drives with clutch field goals to do that.

2) Which brings us to relying on special teams to win games as the other risky proposition. When everything goes your way, it works out; but it will bite you hard eventually.

Harbaugh/Roman learn and move on to 2012 with the stated mission of fixing these problems after they cost us huge against Eli Manning and the Giants.

Last year, the Chicago Bears managed to buck some of that trend thanks to an insane defensive effort; but, outside of that, the top 6 offenses all proved more valuable than the second-ranked San Francisco defense.

2012 featured us moving towards those ideals.

It began with Alex Smith opening things up a bit more. The offensive line was better, the receivers were better, and while things were still balanced, it was clear the offense had improved drastically.

With the offense installed "completely", Harbaugh/Roman attempted to utilize the Kaepernick package more often, even with Alex Smith as quarterback. Again, it points back to what the two mad-men have wanted all along: a pistol offense.

Such "gimmicks" are fun and can be effective, but, it's another example of living by the edge.

It smacked San Francisco hard in the Giants game, where the Kaepernick package stalled a couple of drives and the game quickly turned into a disaster.

It bit the 49ers again when a terrible play-call had Kaepernick attempt a pitch to Teddy Ginn against the Rams. But how many times do you think that play was rehearsed in practice? I doubt very many.

These plays, of course, are legitimate weapons. Calling them "gimmicks" is an off-hand way of dismissing them, but they should not be dismissed. Ginn is very freaking fast, and so is Kaepernick. The Kid pitching to Ginn could prove to be a home run, or it could also bite you.

The question, then, becomes a matter of efficiency verse risk. At what point does practicing the Kaepernick/Ginn pitch play take away from you practicing other plays? At what point should you be taking that play out of the play-book and working on the ones you already have?

On top of that, the methodical drives of 2012 kept our defense healthy and conditioned. Is there any connection between the rise of a more boom-and-bust offense in Kaepernick and the decline of the San Francisco defense?

With more gimmicks and deep attempts, the big play potential grew; but three-and-outs were more prevalent under Kaepernick than Smith and the San Francisco defense, on whole, gave up 10 more points a game under The Kid. Field position suffered, time of possession suffered.

These things do affect defensive play in a long game and over the course of a long season; especially with the snap percentage our boys up front get.

Was there a tougher offensive schedule under Kaep? Yes. Was there bad timing with injuries to our defensive front? Certainly.

Why is that? Is it just a coincidence of timing, injury, and bad luck; or does it reflect something about the opportunity costs this team is willing to accept as the price for a high-octane offense moving forward?

That's okay if you are putting up enough points to compensate, but it can lead to a slow start getting very quickly out of hand. If the bleeding starts, an aggressive offense can potentially open the wound further.

Late-season contests with Seattle, Green Bay, Atlanta, and Baltimore are all examples of slow starts that could have (or did) get out of hand. They required comebacks on the part of San Francisco.

Fred P. Soft and Larushka have done a couple great posts detailing the 49ers' 2012 slow starts. One in New England, one in Seattle, and some cool charts detailing the trend over the season. I encourage you to check these posts out if you have not.

2) Odd plays and "gimmicks" can catch a team off guard and lead to big plays, or it can bite you hard when all you really needed was to play smart, fundamental football.

Too much complication can also lead to costly offensive line penalties, illegal formation calls, delay of games, and, rather notoriously, wasted timeouts to prevent a delay of game.

Just like our biggest risks in 2011 bit us hard against the New York Giants in the NFC Championship Game, the biggest risks of 2012 bit us hard in the Super Bowl. A slow start got out of hand, confusion at the line and tardiness in getting the play snapped cost us valuable yards and timeouts in crucial situations and, when the offense finally got churning and we really needed a defensive stop, there was none to be found.

This post is me trying to contribute to the discussion of where our offense is heading. I think Harbaugh and Roman recognize these problems, but how will they be addressed? And how does it fit into the "plan" that the two men have clearly had from day one?

My tentative opinion is that the a happy medium needs to be found between the ball control offense of the 2012 Alex Smith days and the aggressive, boom-and-bust play-calling under Kaepernick.

Jim Harbaugh has his guy. This has been the plan all along, and the pistol and the read option are huge parts of it. Colin Kaepernick is integral to Jim Harbaugh's scheme and what the Niners' Head Coach has wanted to do since he entered the NFL (and maybe even before, if you are familiar with Harbaugh pursuing RGIII at Stanford).

The San Francisco offensive brain-trust has shown a great capacity to address issues year-to-year and improve. I expect no less out of Harbaugh and The Kid in 2013. My only real question is: what will our offense look like? Are we heading towards a Green Bay aerial show? Are we moving away from 16 - 24 games and towards 27 - 35 games? Was the end of the season a strange anomaly produced by unsustainable circumstances or does it reflect a new philosophy going forward?

I hope we get a balance of all of the above. The trick plays are becoming a problem and there appears to be too much preparation for the players week-to-week. So scale it back.

The world expects Colin to run the read option this year. So let him sit in the pocket and tear defenses apart with his cannon of an arm instead.

Harbaugh and Roman utilized their reputation for a run-first scheme to throw with success on first downs under Smith, as well as out of play-action. Their reputation now suggests a pistol scheme with read option elements and a "running" quarterback. We need to scale back the fringe plays and let that reputation haunt defenses while we pound the rock with Frank Gore and hit Anquan Boldin over the top.

That's just my take on it for now. Open to change upon further review. Where do you think our offense is heading? Where would you prefer it head?

Whatever happens, I expect Harbaugh and Roman to continue evolving, and I expect them to continue walking the high-wire act. That is what is necessary in the NFL to succeed. The margin between winning and losing is small, and sometimes comes down to luck; but you cannot argue with this coaching staff's success so far.

They have shown they can walk the high-wire with equanimity most times. I just hope we stop falling off near the end when the whole circus is watching...

what is "word count"?