49ers CEO Jed York and President Gideon Yu sat down with SAP to discuss how technology is impacting the 49ers. It led to an intriguing discussion across various aspects of the team's operations.

Over the past few months, we've had several articles about the technology the 49ers will be implementing at their new stadium. Jed York, Gideon Yu and the 49ers are attempting to develop a technologically advanced stadium that will be an example for the rest of the league. York frequently talks about how it will be a software driven stadium as opposed to a hardware driven stadium. The team will invest in technology that fans can take advantage of with their various devices, rather than blowing a bunch of money on a crazy big scoreboard (ex: the Jerry Jones shrine in Dallas).

In the video above, 49ers CEO Jed York and President Gideon Yu joined SAP's Chief Marketing Officer Jonathan Becher and Senior VP Barbara Holzapfel to discuss the 49ers use of technology within their scouting and personnel departments, and also in the new Santa Clara stadium. The video is lengthy, running 1 hour and 21 minutes, but it is a fascinating discussion of how the 49ers use technology. If you don't want to watch the whole thing, I'll point some of the segments that most intrigued me.

Starting at the 16:40 mark, they discuss the use of technology in scouting and personnel. SAP is one of the founding partners of Levi's Stadium, and will have their name on the team's practice facility. However, beyond just that, they will operate as the team's exclusive "Business Software, Statistics and Performance Partner". In this role, they will "support the 49ers year-round operations by enabling the organization to run better in all facets."

Technology is frequently slow in developing within sports organizations. Jed York made a good point about how up until two or three years ago, teams were watching all the film on Beta. If you're old enough to remember Beta, you know how dated that is. VHS blew it out of the water pretty quickly, and it hasn't been prominent in decades. If you are asking what even VHS is, well, we'll just have to move on!

York made a good point about the value of information for the 49ers. He compared it to poker, where if you have a better percentage of getting better, you're streaking past your opponent. In the NFL, where the salary cap creates a fairly level playing field from a direct dollars and cents perspective, it is all about spending money wiser. If one team spends money smarter than another team, the other team cannot just outspend the team as compared to the salary cap.

We talk about the advantages the 49ers have because of the people in their front office. We joke about Trent Baalke, Draft Ninja, and Paraag Marathe's ability to Jedi mind-trick agents in negotiations, but it goes beyond that. The 49ers are investing in the technology to help boost the return from their front office.

At the 20:40 mark, we get a bit of a breakdown of how SAP has helped the 49ers scouting department prepare for the NFL Draft. We discussed the scouting database shortly before the draft, and this video provides a little more context to that discussion.

The person speaking (I couldn't quite make out his name) discussed the process used to develop this scouting database. He spoke about how the team was spending 50% of their time collecting reams and reams of data during the scouting process. They spent 30% of the time trying to make sense of it because they were reading it as they collected it. You have a huge binder of information and you find yourself going through it page by page. That left them 20% of the time to actually analyze what they had in front of them.

SAP found themselves tasked with simply creating a more efficient way to assess and compare. They are not going to give away all the details, but they basically turned this mass of information into single player profiles. From a broad perspective that sounds pretty simple, but with the volume of information involved, efficiency is a big deal.

Here is a screenshot of a sample player profile from the presentation: 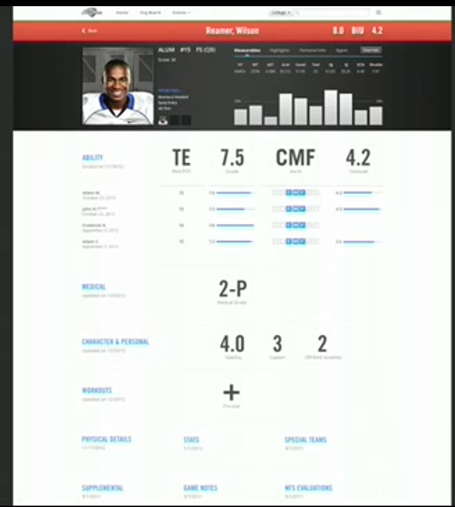 The presenter did not go into much detail about the nuts and bolts of this.

York and Yu spoke about how they were slowly working to integrate technology with the coaches and scouts. The players are getting more technology as well, but when you average player is in his 20s, and your average coach or scout might be in their 40s, the grasp on technology can be drastically different.

Speaking of the players, Yu was asked about integrating playbooks into iPads. There has been some discussion about this around the league, particularly with regard to security of the iPads. Yu pointed out that in reality, security is not a significant issue, but there is a perception of security that is a problem. Yu said the team has the iPad playbook application ready to roll out, but they are taking their time with it to get everybody comfortable with greater use of technology. Yu said it likely would roll out within a couple seasons.

Every team is trying to find an edge to beat the rest of the league. We are seeing technology spread across all sports, and each league has a reason there is value in it. For a team like the Oakland A's in Major League Baseball, they are looking for ways to get an edge that does not come from their payroll. For the San Francisco 49ers, competing in a league where everybody gets the same amount of salary cap dollars, efficiency is the most significant advantage that exists.

The 49ers seem to have found that necessary edge for now. The good news is Jed York has populated the front office with the kinds of minds that can maintain that edge. In the video he talks about wanting to have the front office loaded with people smarter than him. It reminds me of the Lincoln book "Team of Rivals". Strong, visionary leaders know their weaknesses, or at least know that there are people who know more than them on given topics. York sees this, and populates the front office appropriately.

Adding talent from Facebook, Yahoo! and other Silicon Valley companies is a bit of a home-field advantage that the 49ers can utilize against the rest of the league. They have to be implementing change to convince many of these people to join them, but having them available in your backyard is not the worst thing in the world!