We are mere months away from kickoff. Let's take a look at the storylines of Week 3's matchup against the Indianapolis Colts.

It will be a reunion of sorts when the Indianapolis Colts come to town in Week 3. Expect to see quite a few familiar faces and relationships renewed both on and off the field.

First, there's the teacher and pupil. Jim Harbaugh and Andrew Luck comprised what was, perhaps, the premier quarterback-coach combo in college football from 2009-10. At the time, Harbaugh was in the middle of reviving a Cardinal team that floundered for the greater part of the decade. However, the transformation would not be complete without highly-touted quarterback prospect Andrew Luck, who Harbaugh successfully recruited out of Stratford High School in Houston, Texas.

Together, they duo carved out a record of 20 wins to just 6 losses and an Orange Bowl victory against Virginia Tech.

After the 2010 season, Harbaugh left for greener pastures, accepting a San Francisco 49ers head coaching position left vacant by the firing of Mike Singletary. Luck would stay at Stanford for another year before entering the 2012 NFL Draft where he was made the top overall selection by the Colts (there's a fascinating backstory with this that I've written about before). 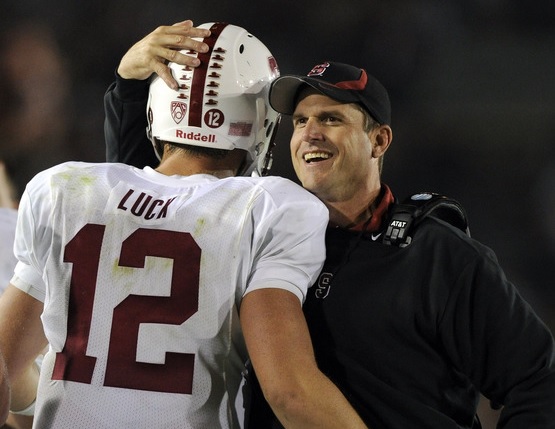 PASADENA CA - SEPTEMBER 11: Head Coach Jim Harbaugh of Stanford celebrates a touchdown with Andrew Luck #12 for a 35-0 lead over UCLA at the Rose Bowl on September 11 2010 in Pasadena California. (Photo by Harry How/Getty Images)

So far, each has experienced a great deal of success at their respective positions on the next level. This will be their first on-field encounter since their days at Stanford, but this time around, they will be competing against each other on opposite sidelines. Harbaugh might know Luck better than Luck knows himself, and you better believe he'll be spending plenty of time cooking up the defensive game plan with Vic Fangio. Fangio, who is now the defensive coordinator in San Francisco, served Stanford at the same coaching position in 2010.

Other notable 'ties that bind': 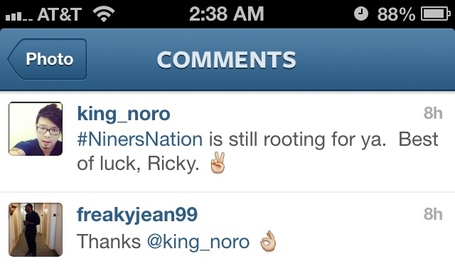 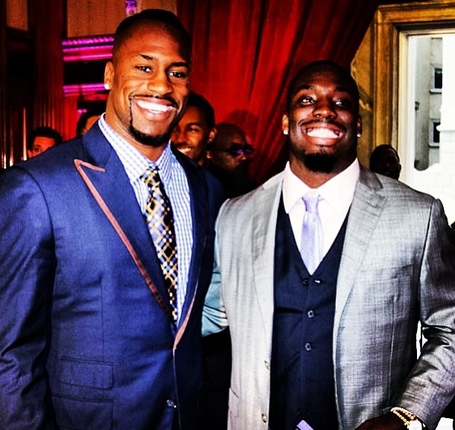 The Colts were one of the best feel-good stories in all of sports last season. Pagano was lost early on after being diagnosed with leukemia. Luck was a rookie quarterback expected to fill the shoes of future Hall of Famer Peyton Manning--with a squad that was 2-14 just a year before. Despite all of these things, the Colts made an impressive late-season surge to reach the playoffs.

No one will dispute that they are one of the league's up-and-coming teams, and they certainly won't be one to sleep on come Week 3.