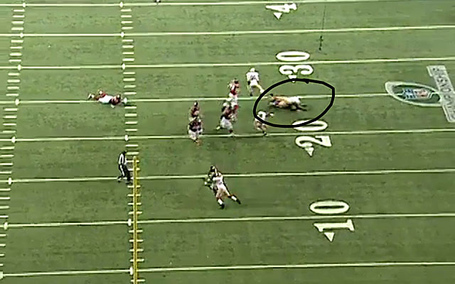 
Pete Prisco has put together an article where he has sat down with Matt Ryan to discuss how the Falcons failed to take down the 49ers in the NFC Championship game. While it is probably normal for a high level competitor like Ryan to expect the most from himself, the discussion boils down to Matty Ice* pointing out every play that Atlanta missed. He then says that they could have completed the pass and that it would have resulted in a Falcons victory.

That is the extent of his logic, the 49ers could not have done anything about any of it, they would not have made different decisions in different circumstances and they did not miss any of their own plays that would also have affected the final score.

The problem with this is that perfection is almost never going to happen on a football field where twenty two athletes are doing battle with each other and chasing after an irregularly shaped ball. It is inevitable that each team will make mistakes, players will slip and catches will be dropped. This is before the random influence of the officials is taken into account.

The three plays they look at before the final drive epitomise this, they are failed plays born out of minor miscommunications, misreads, a dropped snap and a player slipping. These things can happen at any time to any team, this is why the 'best' team doesn't always win and without these random influences the game would be rather dull. However, the analysis is incomplete if you do not look back and see which plays the 49ers could have made but did not for similar reasons.

The mirror of this would be to suggest that the impressive long pass from Ryan to Jones in the corner of the endzone would not be completed every time. Tarrell Brown had good coverage that meant there was a moving window of two or three square feet for Ryan to hit forty five yards away and then Jones must complete the catch with a defender all over him. It's a great combination but under those circumstances what would be the expected percentage? 50%? 75%? You can make your own assessment but it isn't one hundred percent, Atlanta caught that break but they aren't going to catch them all.

On the Harry Douglas play I have two thoughts. Firstly, it is inconsistent for Ryan to complain that Julio Jones fell down earlier without noting his fortune that the niner defensive back fell down on this play. As I pointed out earlier, players are going to slip, it is a part of the game. Secondly, how can he overlook that Douglas dropped the ball? That was an abysmal call, the ball moved and was dragging along the ground and should have been ruled incomplete.

The rundown of the final series provides very little insight, it's a set of shoulda-woulda-coulda. Ryan should have thrown on his fourth step, White could have scored on a post. No credit to Ahmad Brooks for taking over the series (as he often does at the end of games which always makes me wonder what he's been doing for the rest of the day?), it's all on the Falcons shoulders.

What else can we learn from this article? For one, the Falcons do love to run a lot of picks which makes sense as it is an effective way to take advantage of the 49ers' heavy use of man coverage. Perhaps the niners should change up with zone coverage more often to counter the tactic.

Additionally, this is the second time in a week that we have heard that the opponents have been able to get a really good read on the niners' playcalling. This time on defense where the Falcons expected and got a One-robber coverage out of a Man-2 look on third downs. Two examples does not make a trend but it is beginning to be a little worrying.

I found it interesting to read the thoughts of an elite NFL quarterback looking back at a loss like this. Ryan seems to believe that the outcome of each and every play can be controlled by his own actions, which strikes me as rather unusual. However, it could be that this is precisely the mindset that is needed to become a great passer in the NFL and that this belief drives his work ethic. Without the fatalistic acceptance that the result of the game is largely outside of his control the thought that 'I can do better and if I do I will succeed' is what makes him sit through the film study and countless hours of offseason preparation.

One final thought: if Patrick Willis is the worst cover guy in the eyes of Ryan then the 49er defense is stacked.

*Am I the only person that finds this nickname really annoying?