We take a look at the 49ers players appearing in NFL Network's Top 100 list.

Share All sharing options for: NFL Top 100 features Aldon Smith at No.7, Patrick Willis at No. 10

Last night, NFL Network released the top ten players of their annual Top 100 in a two-hour finale. Two 49ers made the top ten with Patrick Willis clocking in at No. 10 and Aldon Smith at No. 7. The voting process leaves a little something to be desired, but the whole point of this list is for discussion, as opposed to actual value of the list.

Aldon Smith is the biggest jumper in the list, and probably the biggest climb we'll ever see, going from unranked in 2012 to No. 7 in 2013. I think that says more about the problems with last year's voting. Smith was a dominant force his rookie season, and probably deserved a spot somewhere in this list.

As for this year's ranking, it's interesting that he is ahead of Patrick Willis. Smith was flashier, but I think we know that Willis is probably the best guy on this defense. That being said, it's still cool to see Aldon climb the way he has.

They don't have Aldon's video up yet, but there is a great line from Jets head coach Rex Ryan midway through it. They are taking about how strong his hands are, and how when he gets them on an offensive lineman, it's just about over. Ryan talked to Aldon briefly before the 49ers-Jets game earlier this year. After Aldon walked away, Rex was talking to an assistant about how they had scouted Aldon at Missouri. He lets loose some expletives, and then says, "That s'um can use his hands." That might be the best line of the night. 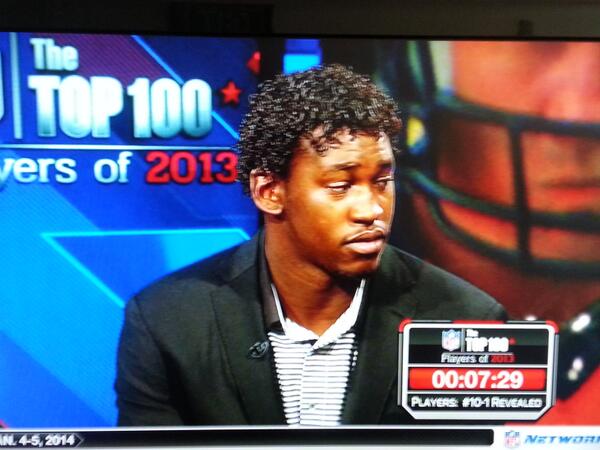 As for Willis, he ranked No. 10, which is the same spot he was in last season. I think he should be higher, but there's something fitting about him being in the same spot two straight years. It says something about how ridiculously consistently great he has been. This is a guy who has made the Pro Bowl and one of the All Pro teams every single year he has been in the NFL. Jerry Rice was a 13-time Pro Bowler and a 12-time All Pro, so we'll see if Willis gets anywhere near that. But for now, he's had an amazing career, and is on pace for an all-time great career.

You can check out the Top 100 video on Willis, and enjoy the compliments from opponents. The highlight of this video might be the play where he runs down Arizona Cardinals wide receiver Andre Roberts on an end around. Willis doesn't have the greatest angle initially, but his speed allows him to catch up to Robers and drag him down from behind. Few players have the sideline to sideline speed of Willis. We've seen him drag down Steven Jackson and Adrian Peterson among others, and I don't see it getting boring any time soon!