Jim Harbaugh loves Judge Judy, thinks it's funny when she insults people, and apparently doesn't like the mental image of "roommates with benefits."

Share All sharing options for: Jim Harbaugh on 'Judge Judy' show -- we've got screenshots of the 49ers' coach living the dream

By now, you probably know that Jim Harbaugh attended a taping of the Judge Judy program, a courtroom reality show presided over by retired judge Judith Sheindlin. In the show, "Judge Judy," (I cannot, for the lif eof me, refer to her as just "Judy" or in football terms by her last name) adjudicates real-life small claims court cases in a simulated courtroom.

Judge Judy is easily the most popular of these shows, and the woman herself makes a ridiculous amount of money doing it. Oh, and I just happen to be a ridiculously big fan of these reality court shows (Judge Joe Brown is my favorite!). So naturally, I had to tune in.

First, some backstory: as David Fucillo noted yesterday, Harbaugh has spoken of his Judge Judy-fandom in the past, saying that he had the same policy on dishonesty as Judge Judy -- it ruins one's credibility and you're basically done once you lie.

Harbaugh definitely didn't lie, as you can see from the hug he gave in the post linked above. So anyway, I tuned into the episode and decided to grab some screenshots. First, we've got a view of where Harbaugh and his father, Jack, sat during the taping. 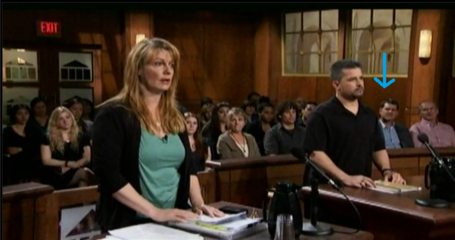 As you can see marked by the blue arrow: Jim Harbaugh. His dad is right next to him. The case (Harbaugh was only visible for the first case of the episode) broke down pretty simply: woman on the left suing guy on the right for unpaid "loans." Said loans were gifts, according to the man.

The case itself was pretty entertaining, as the woman couldn't keep her story straight and then totally broke down into lies when the guy said the two were "roommates with benefits." This is TV speak for the fact that they were doing the horizontal monster mash daily, nightly, and ever so rightly.

Directly after Judge Judy said the two were "roommates with benefits," the camera panned over to Jim Harbaugh, and this is the face he made: 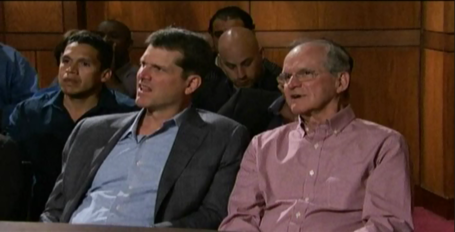 Now come on Jim, I know they're not the two most attractive people but you don't have to look at them like that. They're people too, you know? Anyway, this was the first time over the entire course of the episode that Harbaugh had not been smiling. He was grinning like a mad man the whole episode.

One interesting note is that they showed Jim and Jack multiple times but didn't ever put a graphic up that said his name or anything like that. Anyway, the case advanced a bit with the woman trying to fix her story, and then Judge Judy started talking about how they were doing it again and started insulting the woman pretty heavily.

This is the meat of any episode of the show and something that her fans love. Jim Harbaugh is no exception: 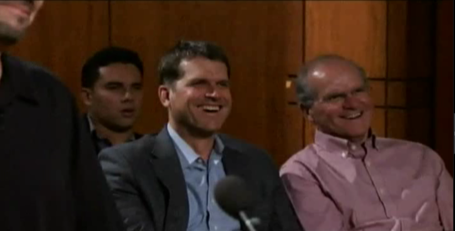 That's about all we saw of Harbaugh on the actual episode. There was nothing really gif related as his expression was basically pure elation the entire episode. I dunno what the guy behind Harbaugh is so confused about, but man that guy loves what he's watching.

As an aside, here's a screenshot of the defendant from the following case ... what in the heck is going on with the side of his head? I'm so confused.

Fooch's Note: Found some video from the show: