Terrell Owens would like to become a professional bowler

TO apparently would like to try and become a professional bowler. Yes, it's a slow weekday in June!

One of the things I love and hate about Twitter is retweeting. On the one hand, someone can fill up your timeline with mentions that you could not care less about, and other times you can find some intriguing content. I got some of the latter earlier this week when I saw an article about Terrell Owens pop up in my timeline. It turns out TO might just want to become a professional bowler!

TO says he first took up bowling when he joined the 49ers, and is part owner of a team in the Professional Bowling League. He was in Milwaukee promoting the PBA, and discussed his love of bowling. He is apparently working with his team's best player to learn the ins and outs to go from good bowler to great bowler.

According to TO, his highest score ever was a 288, and he once rolled 16 consecutive strikes over the course of two games. Who knows what becomes exaggeration, since bowling to me sometimes is like fishing in terms of tall tales. I might have once cracked 200, but I think my best game was 197, or something like that. My game is pretty inconsistent. I can usually crack 100, but I've had my share of less than stellar performances. I've found that drinking often improves my game.

Here is a full picture of TO bowling, and rocking the necessary footwear! 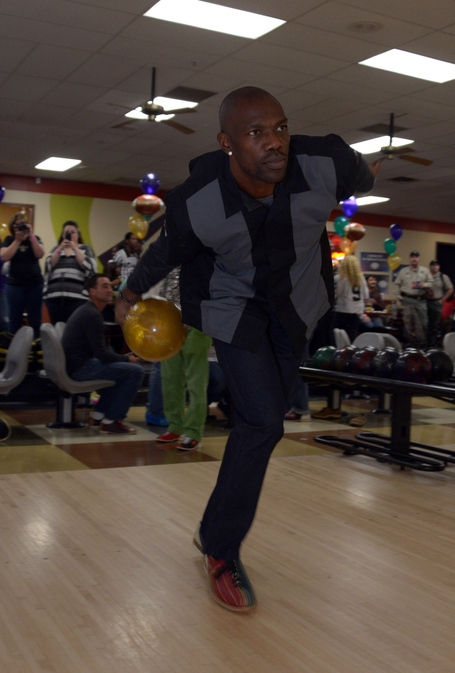 It is worth noting Owens is still interested in returning to the NFL, and he actually contacted Bears head coach Marc Trestman. For those who don't recall, Trestman was the 49ers offensive coordinator in 1995 and 1996 (TO's rookie year).