The 2013 college football season is just around the corner. This week we'll take a look at the preseason award watch lists to get an idea of who to keep an eye on this fall.

Ah yes. Do you smell that? The football winds have kicked up and are wafting to your senses. College football begins next month. The final season of the BCS as we know it (a four-team playoff will begin in 2014) kicks off Thursday, August 29 marking the start of what should be a pretty compelling season.

This week the famous watch lists for college awards will be made public. Essentially these watch lists are nothing more than a group of names that committees have selected for fans and pundits to keep an eye on. There is literally an award for every single position group on the field. Keeping track can be a bit tedious. But that's why we're here.

Over the next week or so, Trevor Woods and I will fill you on the watch lists and give you a few names from each list we'll be keeping any eye on. These names could be targets in next year's draft or just some high impact guys who are likely to be household names come 2014.

Let's begin with a look at the Bednarik Award watch list. The Bednarik Award is given out annually to the best defensive player in college football. The award is named after University of Pennsylvania and Philadelphia Eagles Hall of Famer, Chuck Bednarik.

Without further ado, here is the 2013 Bednarik watch list: 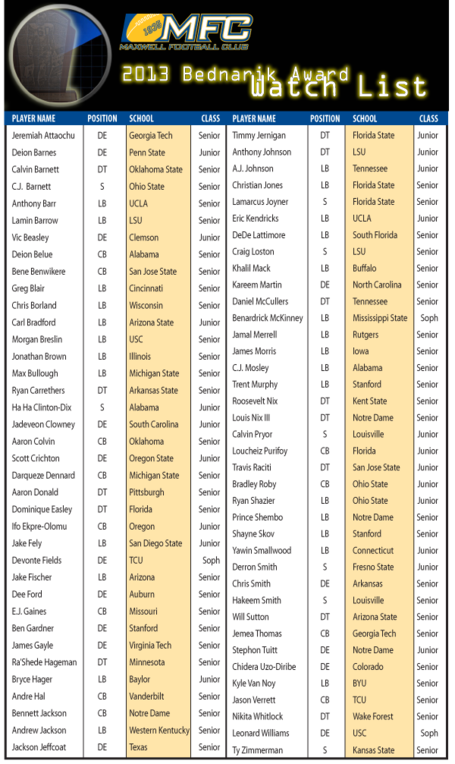 Three of the players on the list were named semifinalists in 2012. The clear favorite to win the award in 2013 is South Carolina All-World defensive end and virtual lock to be the No. 1 overall pick in 2014, Jadeveon Clowney. The other two semifinalists from 2012 are Alabama linebacker C.J. Mosley, and Arizona State defensive tackle Will Sutton. All three of these players are likely first round selections in the 2014 NFL draft.

The best way to look at this list in terms of potential impact to the 49ers might be to look ahead at possible positions of need for 2014. With Nnamdi Asomugha, Carlos Rogers, and Terrell Brown's futures by the Bay very much in doubt, corner seems like an obvious need in 2014. The best on this watch list include:

Donte Whitner has one year left on his contract and his play will be under a microscope this season. Potential replacements from this list could be:

Other really exciting players to watch include: