We review the All-22 of cornerback Perrish Cox's lackluster debut against Green Bay to see how he stacks up with Pro Football Focus' grading of his play.

As many of you may know, Pro Football Focus (PFF) gives a grade to every NFL player for every snap they play. At the end of the season, those grades are added together to give a cumulative score. PFF then ranks those players based on their scores.

For example, from their own "How We Grade" walkthrough:

A seal block on the backside of a play... is something that it is reasonable to expect to be completed successfully. Consequently, it receives a zero grade, whereas the differentiation between a good and poor block is a heavy downgrade for a failed seal block to the backside of a running play.

Different plays receive different grades based on how "routine" they are and how well executed they are. The grades of each play are added up through the whole season.

49ers safety Donte Whitner, as has recently been discussed, graded out to a (negative) -1.7 for the entire 2012 season, which ranks him 53rd at his position. In just the coverage aspect of his game, he ranked 68th with a -2.4 grade.

This caused quite a stir regarding whether PFF had underrated Whitner or not. There has been some concern in different corners of the football interwebz over the usage of Pro Football Focus' grades as an authority on player performance.

Before stumbling upon the controversy, I was already brewing in my head an idea to go through their grades for every game the 49ers played last year. The idea was to find some of the best and worst performances of each game, as judged by PFF, and review the most interesting ones on the All-22 and break down plays.

Now that there seems to be a growing interest in PFF and the reliability of its grades, this idea to study film based on their grades has turned into an opportunity to compare the two.

So, welcome to a new Niners Nation series that I am calling "Caught on Tape!" This will be an ongoing series analyzing the coaches film of some of the best and worst performances from San Francisco's 2012 season.

On this journey, I will learn a lot myself -- because I am no football guru when it comes to Xs and Os. The main idea is to provide our fine community here (cheap pop!) with the stills of certain plays, what I believe PFF claims is happening on those plays (due to some proprietary grading, I will not know with complete certainty), and then discuss our own analysis in the comments below.

Ideally, as we move along, we will see just how accurate Pro Football Focus is in some of their evaluations. At the least, we will learn some of the strengths and weaknesses of the current 49ers roster.

We will be reviewing several individual performances from each game as we move through July. If there is enough demand, I may continue it through August as we near the regular season.

Oh, and as a full disclosure, I really like PFF and the work they do. They are also the only ones doing it. Any discrepancies we find are just that: discrepancies. They do not necessarily reflect a fundamental flaw in their grading system. They may just reflect a difference of opinion.

Of course, if they do reflect something fundamental, then we would expect PFF to change the way they grade. Some of you might think their organization is many dreadful things, but dogmatic is not one of them. Empiricism gives way to empiricism.

We start this series with last year's Week 1 win over Green Bay. It marked cornerback Perrish Cox's debut as a Niner, and it was not a very good one.

In particular, Cox struggled against Randall Cobb, Green Bay's shifty receiver who they utilize in various ways. Cobb was 3-for-3 in receptions against Cox, producing 39 yards -- an alarming 37 of which were YAC (yards after catch). Cobb led Green Bay that day in both receptions (9) and YAC (61), doing the best of his damage against Perrish.

Cox played 55 snaps in this game -- the most he saw all year and the lowest among the Niners' defensive backs that week.

He was not a starting corner for San Francisco in 2012, and the only reason he saw so many snaps against Green Bay is because of their prevalence for 4/5-receiver sets and the like. It takes San Francisco out of their base defense and forces them to replace a linebacker -- often times NaVorro Bowman or Patrick Willis -- for a DB.

Cox's performance was the second-worst of the game among 49er players (again, according to PFF's grades), and the absolute worst in coverage.

The worst overall performance belonged, somehow, to Aldon Smith. The next worst performance was Donte Whitner's.

Vote in the poll below to decide who else we should take a look at. I tend to lean towards analyzing bad performances, because I think they are more interesting. But I listed some good ones, too, in case you just don't care what I think.

For today, we move on with Perrish Cox.

Cox's bad day came in the form of three receptions given up to Randall Cobb for 39 yards. His longest reception of the day was 16 yards.

We start in the 1st quarter. It's a 3rd and 3 on the second drive of the game.

Green Bay has four receivers out wide, spreading the 49ers thin and leaving tons of space in the middle. 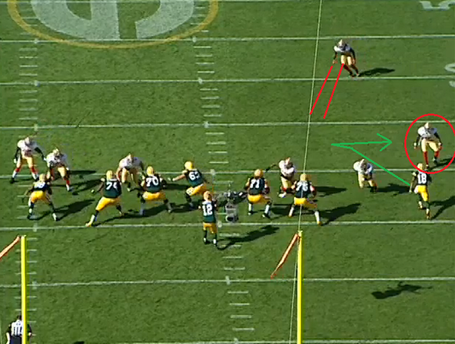 Yes, lots of space. Cox is lined up outside, one-on-one against Cobb, who is running what I decipher to be a fake slant to an out. 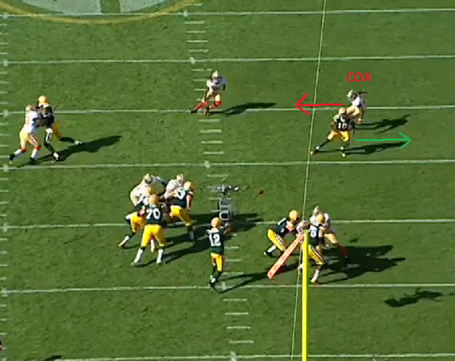 At the top of the slant, Cobb hooks back in. Cox is compensating to a great degree even though he appears to have at least a little bit of help inside a la Goldson.

Compare the still above to this next one: 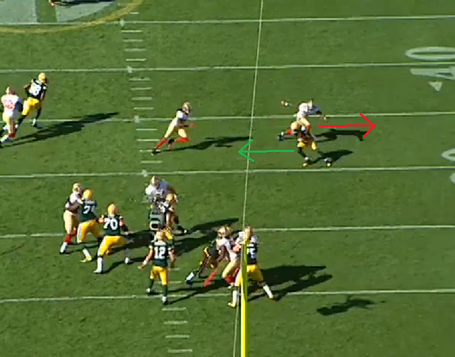 Cobb has caught the ball and decided to jerk back inside. Cox is over-compensating outside. 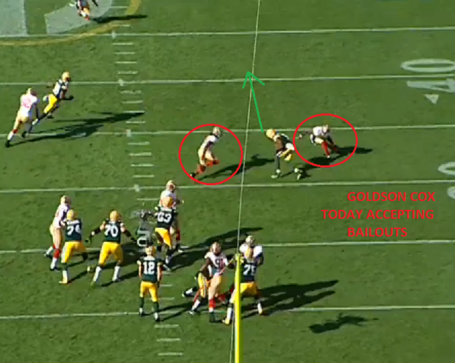 Both Goldson and Cox miss their tackles here, allowing Cobb to pick up about 7 or 8 yards of YAC to the Green Bay 38-yard-line and a first down.

PFF blames Cox for this play, and I am sure they assigned both Goldson and Cox a missed tackle. Nothing to shake a fist at yet.

This next play is almost a mirror image of the last one. 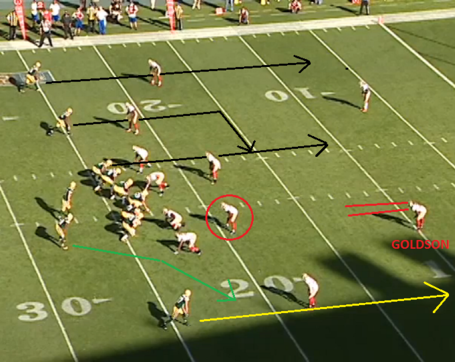 Goldson, again, with lots of space in front of him, is eyeing the QB.

Wide receiver Jordy Nelson (yellow) is running a go with Chris Culliver in coverage. Cully had a good game against Green Bay and handles Nelson well over the top.

Our boy Perrish is lined up on Cobb again, who is going to stick around for a brief moment to make sure he does not have to block anyone, and then he'll flood into the flat.

At the snap, Perrish dives in a bit too aggressively, leading to this: 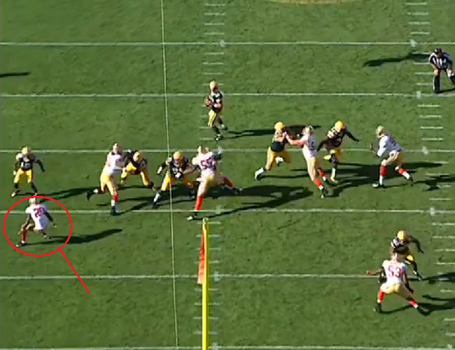 Cox is flat-footed, unsure of what route Cobb is running and definitely unprepared to handle him as he breaks outside. 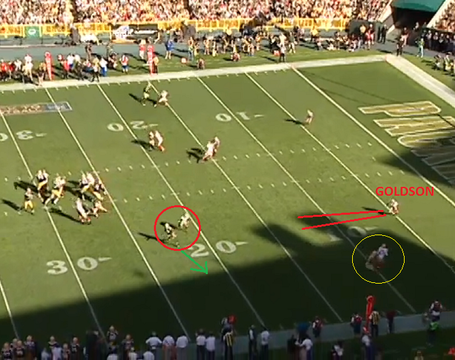 Thanks to the great coverage Cully is providing on Nelson, Goldson never even really looks his way, instead keeping his eyes on Rodgers.

As the former Super Bowl MVP releases the ball, Goldson collapses down to attack. 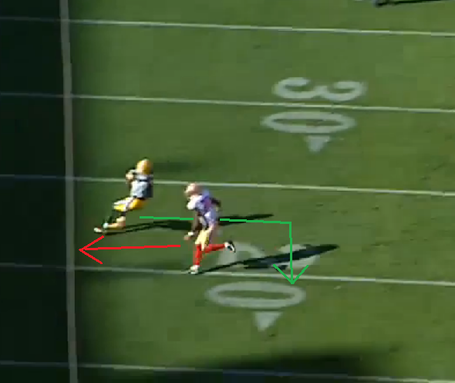 Cobb catches the ball and, just as in the last play, immediately turns. Cox, meanwhile, is once-more over-compensating and he slips and falls as Cobb races around him. 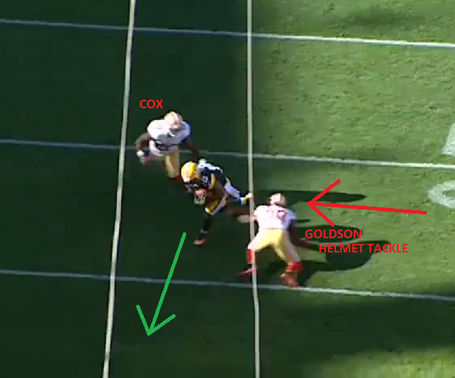 Goldson lunges his helmet at Cobb in a vain attempt at a tackle or something, while Cox tries to get him from behind.

He ends up gaining 12 yards, with basically all of it being YAC.

Nobody expects the screen play!

This last one might offer us our first glimpse of PFF grading a play the wrong way. 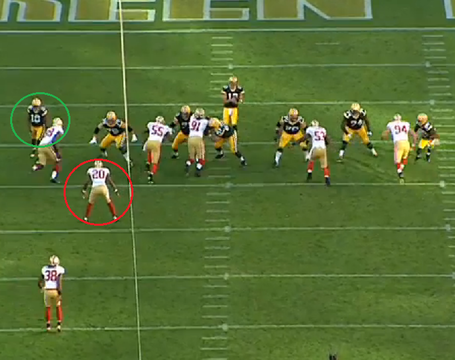 Cox, again, lined up on Cobb. 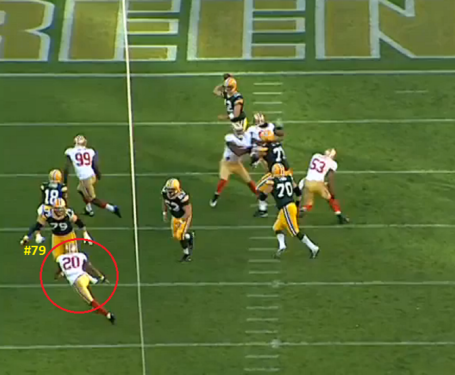 But the screen play is on! #79 has let Aldon pass him by, and now has his gaze set on Perrish. 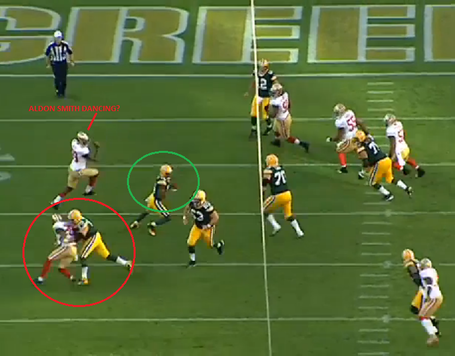 Cox, who weighs about 200 pounds, gets bulldozed off-screen by a much larger man. Cobb takes the ball 16 yards past the line of scrimmage for a nice gain.

Maybe it's just me, but I don't see how this particular play can be blamed on Cox. The YAC for Cobb adds up right, his yardage adds up fine, but is a screen play really Cox's fault? What is he supposed to do here, exactly?

Cox graded a (negative) -2.7 in coverage according to PFF. We don't know how much of that was the first two plays, and how much was this one, but we do know he was assigned the yardage total of this play even though, it appears to me, that this is just a well-executed screen. Not much Cox can do.

Without knowing exactly how PFF grades, we cannot say for sure that their grade for Cox in Week 1 was off. However, I will say that I would disagree with the assessment that the yardage gained here is Cox's fault.

Even if it has to go under him for the sake of "stats" -- because he was technically in cover against him, and you cannot have yards gained that are "nobody's" fault -- Cox might have been given a negative grade for the play, too. If Cox was given a negative grade for the play, which helped contribute to his -2.7 on the day in coverage, then that is a decision I would protest.

Once the screen pass is successfully completed, it becomes "routine" for #79 and company to take care of whoever is in front of them. If Cox had made a stop here, it would have been spectacular, but I think the "average" result would be for him to get taken out of the play by an offensive lineman.

It's the first three plays of the first game of the first player and we already have ourselves a prime example of a grading that might warrant a change, or at least has me all anxious just talking about it. I bet if one watched enough screen plays, one could have very reliable rules for what is and is not "routine/average." I wonder if that is exactly what PFF does... hmmm...

Can't wait to see what else we can find as this series continues!

coach's film stuff for the next few weeks @liberty_JAC