Colin Kaepernick and Russell Wilson had a chance to hang out and play some Madden in advance of Wednesday's ESPYs. Naturally there are some pictures.

Share All sharing options for: Colin Kaepernick, Russell Wilson hang out as Wilson shows off his Kaepernicking for ESPYs week, Madden commercial

The offseason has seen plenty of hubbub about Colin Kaepernick, and his Dolphins cap and appearance in ESPN the Magazine Body Issue. At the time of the Dolphins nonsense, I suggested on Twitter that it would be fantastic if Colin Kaepernick and Russell Wilson were photographed hanging out together. I had to imagine Seahawks and 49ers fans would lose their mind.

Well, we have some pictures as the two are hanging out this week leading up to the ESPYs Wednesday night. The two were playing some Madden as part of a Madden commercial. The highlight of the pictures is this Instagram shot sent out by Russell Wilson. The caption for the picture says he did that after scoring a touchdown against him. The Madden commercial should be good.

Prior to the picture at the top of Kap and Wilson playing Madden (courtesy of Lunarscape Pictures (@lunarscapellc)), we had this shot, which probably makes for a good caption contest. This picture comes courtesy of @sandysandovalEA: 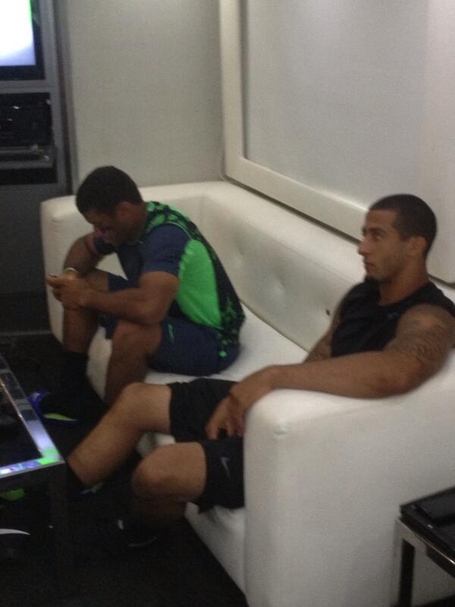 They had a good time after this with Madden, but it's still a funny picture to consider.

On a side note, you can continue voting until tomorrow in the balloting for Best Breakthrough Athlete. Kap is facing Wilson, Johnny Manziel, Yasiel Puig and Mike Trout. Make sure and vote!