We review the All-22 of Donte Whitner's Week 1 performance against Green Bay to see how he stacks up with Pro Football Focus' grading of his play.

Welcome back to the ongoing series, "Caught on Tape!", where we find some of the best and worst game performances of 2012, as graded by Pro Football Focus, and review them on the coaches film.

In the debut piece, we took a look at Perrish Cox's rough day covering Randall Cobb.

In that article, I also introduced the series and explained its origin in Donte Whitner:

49ers safety Donte Whitner, as has recently been discussed, graded out to a (negative) -1.7 for the entire 2012 season, which ranks him 53rd at his position. In just the coverage aspect of his game, he ranked 68th with a -2.4 grade.

This caused quite a stir regarding whether PFF had underrated Whitner or not. There has been some concern in different corners of the football interwebz over the usage of Pro Football Focus' grades as an authority on player performance.

The particular article referenced in the quote above broke down a play from the Super Bowl -- a play which Whitner was perhaps incorrectly blamed for. This prompted an idea to go through the film of many performances and see where the tape disagrees with PFF's grading.

Working to our advantage, Jeff from PFF has joined us in the comments for both articles so far, to help clarify some things based on his insight into the PFF grading process. Hopefully we can continue to receive some attention from them moving forward!

Which brings us to today's article focusing on Whitner's coverage in Week 1 against Aaron Rodgers at Lambeau Field.

The context of every play and every game is always important. Luckily, from reviewing Cox's performance, we know that Cobb had the best day among Green Bay wide receivers.

This means, to at least a certain extent, the other receivers were being guarded well.

We also know, based on our review last week of Aldon Smith's day, that Rodgers was getting rid of the ball quick as part of their plan to negate the 49ers strong pass rush.

All things considered, Whitner's day should have been easy. Most the pressure would be put on the San Francisco corners to not get beat bad in man coverage -- and, for most the day, they did a good job of containing the Green Bay aerial fireworks.

These are the sorts of things we want to analyze to decipher the "method to the madness" of PFF grades.

As far as I can imagine, up front, the reason for the noticeable split in grade is partly described above. Green Bay was relying on quick throws, and the 49ers play a lot of man coverage; so if there is anyone on our defense who will be put in bad positions from time-to-time, it is our cornerbacks. Thus, the reality of them occasionally being beat may not reflect any poor play on their part.

I do not know how often positive grades are given out for DBs on plays where they do not register any actual stat. For example, if Brown covers a guy well for three seconds and Rodgers is forced to throw the ball elsewhere, does that net him a positive grade? If so, this would also help explain Brown's great day compared to Whitner's. Brown was in man coverage more often than Whitner, given more responsibility, and likely had more positive impact despite giving up much more yardage through the air.

PFF grades are not just dependent on the result of the play, either; but also the level of perceived difficulty. I do not know the exact process, but one can imagine examples: a perfect back-shoulder throw 30 yards down the sideline on a perfectly guarded wide receiver will not grade out as poorly for the DB involved as, say, a 5 yard dump off on a flood route that gets taken another 6 yards for a first down due to a missed tackle.

One looks worse on the coverage stat sheet, the other looks much worse on film. And, of course, remember that PFF grades are not a zero sum game. A positive grade for one player does not imply a negative for another. In the example above, the perfect back-shoulder throw would net the QB a great grade, while the DB might be barely affected.

As for Whitner's day, he did miss three tackles; and also allowed a touchdown. His one pass defended could have been an interception (and a defensive touchdown), which would have helped his day quite a bit.

Because of my interest in this discrepancy between Brown and Whitner's grades, please join us tomorrow as we take a look at Tarrell Brown's day.

For now, we take a look at two Whitner plays: one in man coverage and one in zone; both of which resulted in positive plays for Green Bay. 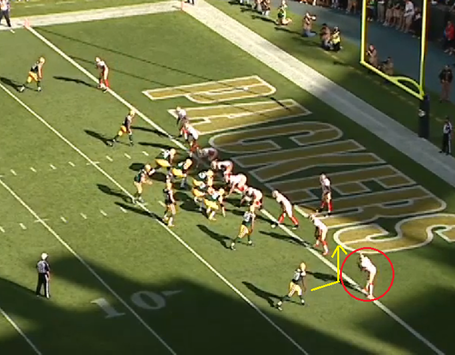 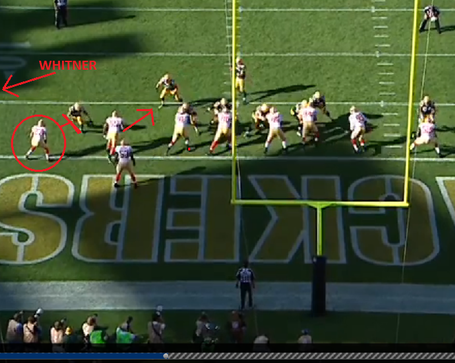 Just inside them, C.J. Spillman is also in man coverage while Patrick Willis is on a blitz. NaVorro Bowman (inside the "R" in the end zone) is watching anything inside.

So Whitner is alone on this one. 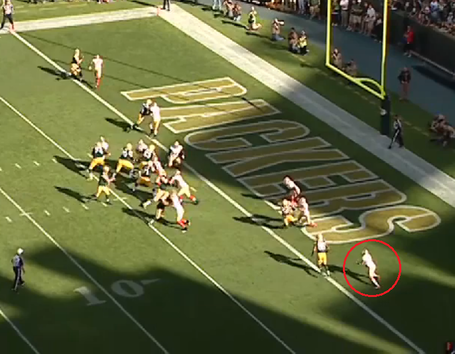 Which is why his decision to give Finley some space inside works out to the Packers' advantage.

Rodgers turns and throws quick to a wide open Finley for Green Bay's first Lambeau Leap of the 2012 season. The touchdown is correctly blamed on Whitner.

The next play features San Francisco doing something silly (in my opinion). They play zone and send only three pass rushers, giving Rodgers as much time as he wants to find someone open.

But, of course, some of you may remember this being a common complaint last year: Defensive Coordinator, Vic "Lord" Fangio, going into "prevent" too early in the 4th quarter.

First, the Packers' routes on the play: 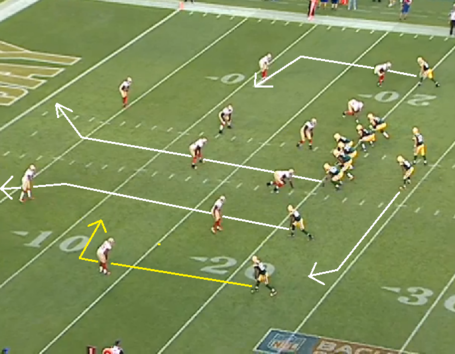 Next, the coverage on the relevant side: 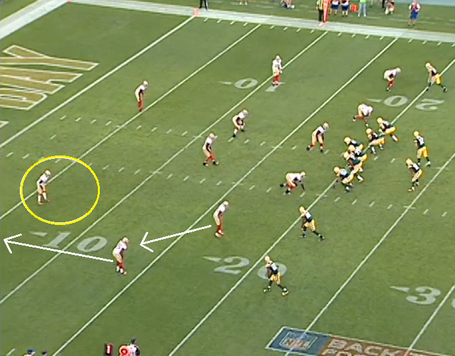 As far as I could gather, the man with the arrow pointing all the way back is Tarrell Brown. He plays zone over the top of everyone on this play.

Just inside is Carlos Rogers, who is going to back up and outside to play zone right about where Brown is currently standing.

Whitner (yellow circle) is playing basically in the same spot we see him in above. 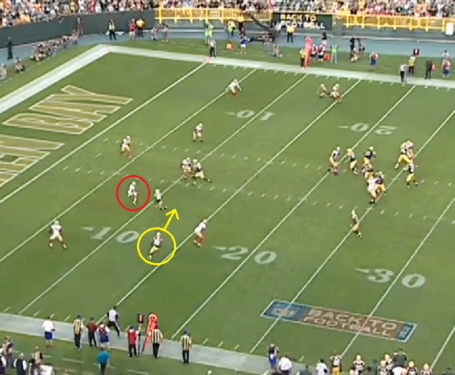 Here, (Aaron) Rodgers is about to release the ball. A really cool insight into the way quarterbacking works. James Jones (yellow) is the man he is going to hit, but Jones has not even passed (Carlos) Rogers inside yet.

Similarly, Whitner (red) has not yet released the Green Bay receiver in front of him. Whitner has to stay with him at least up to this point before letting him go, knowing Brown would then cover him over the top.

It is, really, just a well designed play that exploits a hole in the coverage with excellent timing from one of the most dangerous passing teams in the league. 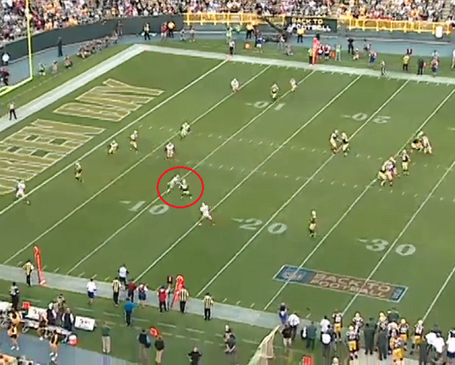 Jones catches the ball and Whitner is right on top of him, actually doing well to prevent a first down. But the 9 yards on 1st is a great pick-up for Green Bay, and, ultimately, PFF notches this reception as Whitner's responsibility.

I am not sure how I feel about that, but I suppose it would depend how badly graded Whitner was for it. There is no way he could bite on the underneath route any sooner than he did, because he could not release the man in front of him that early.

I think looking into Brown tomorrow will give us a lot more insight into how PFF judges the play of defensive backs. On the whole, Whitner did not have a terrible day, but he did give up his third reception later in the 4th quarter. It was, again, in man coverage. He allowed a reception to Greg Jennings for a first down and then missed a tackle to acquiesce a few more yards.

Nothing Donte did on the day seemed too egregious, but giving up a touchdown in a pretty straight-forward man coverage play is a no-no; as is missing a tackle in man coverage later on.

The yards were few, but they were important and, perhaps most importantly, preventable.

We move to Brown tomorrow to give us a clearer view of this game's grading.

Trust me, by the time we make it through most the 2012 season, we will have a really accurate idea of how to judge future performances based on the grades PFF provides!

It will make 2013 all the more interesting.