We review the All-22 of Tarell Brown's Week 1 performance against Green Bay to see how he stacks up with Pro Football Focus' grading of his play.

Welcome back to Niners Nation and our on-going series, "Caught on Tape!", where we take a look at the performances of various 49ers from the 2012 season, how Pro Football Focus (PFF) graded their efforts, and what the All-22 coaches film reveals to bring it full circle.

The grades come via PFF's Premium Stats. Their organization watches every snap of every game and gives each player a grade based on how well they do. We find some of the more interesting evaluations and break them down further on tape.

In the Green Bay series so far...

In case you missed the first few parts of our Week 1 @ Packers series, here's what we know:

We first analyzed Perrish Cox's struggles with Randall Cobb. Cobb had the best day of any Green Bay receiver, forcing quite a number of missed or otherwise-sketchy tackles and accruing 77 yards on 9 receptions -- 61 of which were yards after the catch (YAC).

The reason for his success, aside from the missed tackles, is that he became Green Bay's best available weapon due to the game plan that San Francisco pursued.

Committed to not being beat deep, the 49ers let their superb four man pass rush take care of pressuring Aaron Rodgers, who was getting rid of the ball fast to compensate, and forced to scramble several times. Throws underneath were mainly all that Rodgers managed on the day, with Cobb being the go-to guy.

The Green Bay game plan called for quick strikes, and that affected Aldon Smith's grading. We took a look at him in our second part of the series, finding that, though his day was a bit better than advertised by PFF, he did struggle to create pressure due to Rodgers' commitment to a fast release and his ability to scramble and make things happen with his legs.

With the pressure of containing Green Bay's many weapons on the San Francisco corners, and with the pass rush negating much deep, the 49er safeties had a relatively easy day -- and therein lied the problem with their inconsistency. The third part of the series looked at Donte Whitner's performance. He have up very little yardage, but managed to miss a few tackles and acquiesced a touchdown, as did Dashon Goldson. Both men were graded poorly by PFF.

In the Whitner article, we noted that, stat-wise, he had only given up 19 yards on 3 receptions, yet PFF graded him a (negative) -2.1 in coverage.

On the other hand, 49ers' cornerback Tarell Brown gave up 102 yards on 5 receptions and managed an average (but still much better than Whitner) grade of +0.1.

That brings us to today...

Tarell Brown played most his snaps in man coverage, as is typical for 49er defensive backs. On the whole, he did, as his grade implies, a fine enough job containing Green Bay's diverse aerial choices.

Whether playing off or in press, Brown stuck with his guy pretty well and did not get beat deep. 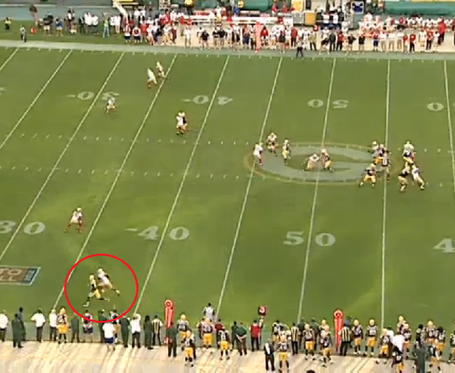 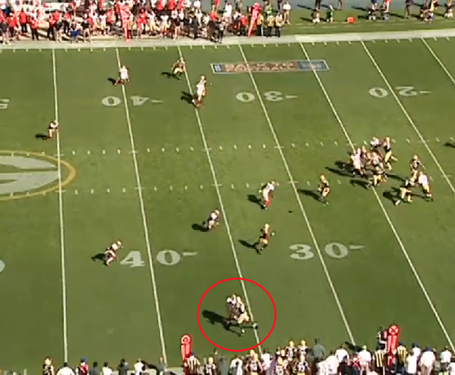 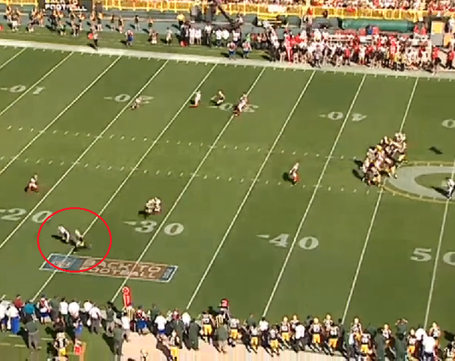 These are just a few examples, but the game was littered with them. Brown stuck with his guys quite well, especially making sure to not get beat deep.

In total, Rodgers actually threw Brown's direction six times. Brown managed to get a hand on one, while the other five were completed for receptions.

Three of those five were very short gains of 6, 13, and 6, respectively. The other two were a 28 yard gain and a 49 yard gain. We break down three of those plays below.

The two we will not be breaking down are as follows:

(1) A quick wide receiver screen to Greg Jennings on 1st and 10. Brown was playing off the line of scrimmage by about 5 yards. Rodgers hiked and threw to Jennings, who then managed 6 yards before being forced out of bounds by Brown.

6 yards is 6 yards, but it wasn't the kind of play you could grade a guy badly for. PFF probably agreed.

(2) Brown gets beat inside and underneath by Jordy Nelson for 13 yards on a 2nd and 15. Pretty straightforward, so nothing to really look at. Nelson ran a deep in -- i.e., go about 10 yards straight up-field, then cut inside, horizontal to the line of scrimmage -- and caught the pass in decent coverage.

Brown made the immediate tackle, preventing a 1st down; but his failure to prevent the reception probably cost him a bit in the grading process.

The other three plays are much more interesting in that opinions of them may vary.

First, we take a look at the other 6 yard gain. 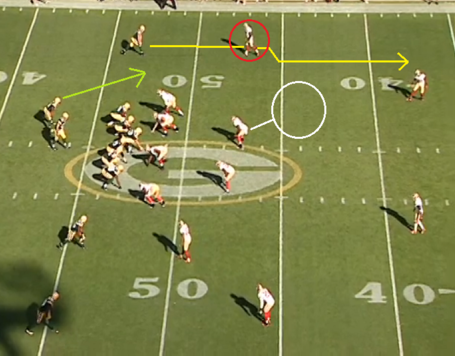 Brown (red circle) is on Nelson (yellow line), who will fake inside before going deep.

Cobb, the man who eventually catches the pass, is coming out of the back-field. 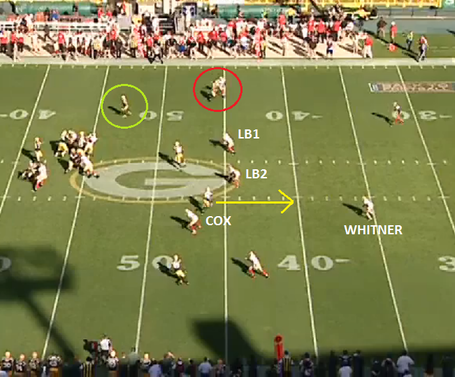 A lot going on in this one.

Rodgers is just now about to release the ball to Cobb (green circle). Brown (red circle) appears to be running step-for-step with Nelson in man coverage.

But notice everyone on the field who I have indicated by white text. Their bodies are all square with the line of scrimmage. Bowman (LB1), Willis (LB2), and Cox are playing what appears to be zone coverage. Neither Cox nor Willis are at all concerned with the Green Bay receiver (yellow line) about to blur by them. Whitner will be responsible for him as he goes deep.

Notice, too, the depth of Whitner compared to Goldson. It appears Whitner knew he would be responsible for a receiver once he got about 10 yards up-field. Goldson, on the other hand, is playing much deeper, and does not appear concerned with all that space in front of him. He expects Brown to handle Nelson man-to-man at least over that distance. 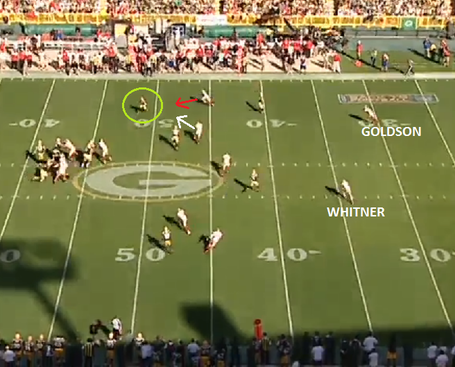 Only once the ball is in the air does Brown split off Nelson and attack Cobb. Here we see the pass as it is completed, with Brown (red) and Bowman (white) converging for the tackle.

Given all of this information, it seems to me Brown is the only one in man coverage here; meaning the completion to Cobb is not his fault. While he does get blamed for it on the PFF stat sheet, I wonder if it affected his grading at all. If it did, it must not have been much, considering he graded out a +0.1.

This play actually occurs right before the previous one. It is one of two plays where Brown was beat deep. 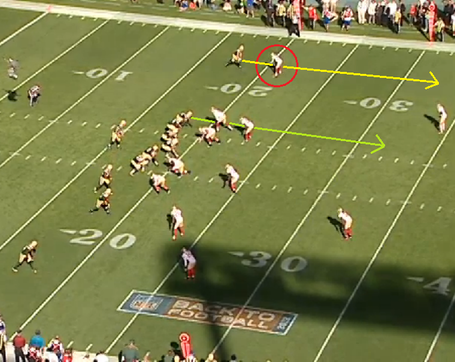 Ball at the 20 yard line. Nelson (yellow) is running a go down the sidelines, with Brown (red) guarding him. 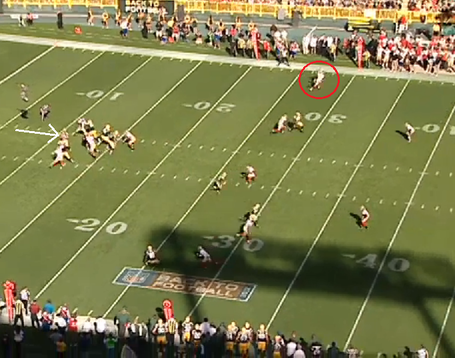 Everyone here is in man coverage. Notice the linebackers and corners are all turned in different directions, unlike the last play where they were square, facing Rodgers.

Brown is on Nelson fine at this point, as Rodgers is at the top of his drop with no one to throw to deep. 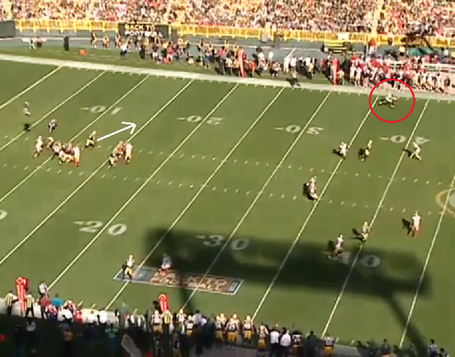 Rodgers evades a bit of pressure and scrambles to his left. No one in the league is better at scrambling left and throwing with his right arm than Rodgers (though Kaepernick might be able to compete for that title soon enough). 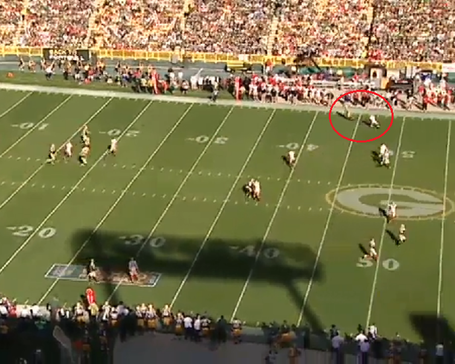 A couple yards later, Nelson suddenly turns around; at which point Brown, who has been running full speed, loses him. Nelson makes a sideline comeback and catches the great pass from Rodgers before Brown tackles him for a sizable 28 yard gain.

Now, either Nelson was running a 25 yard comeback route (!!), or he saw Rodgers scrambling and decided in that moment to cut back and lend him some help.

If a play breaks down, as this one did, it can get quite difficult for a CB to stay with his guy for such a prolonged period of time. Part of what makes Rodgers dangerous is his ability to scramble and throw on the run.

Not much here to pin on Brown as far as I can tell.

This last play demonstrates a similar result. A broken down play that results in a big gain thanks, not necessarily to a lapse in coverage, but the athletic ability of Aaron Rodgers. 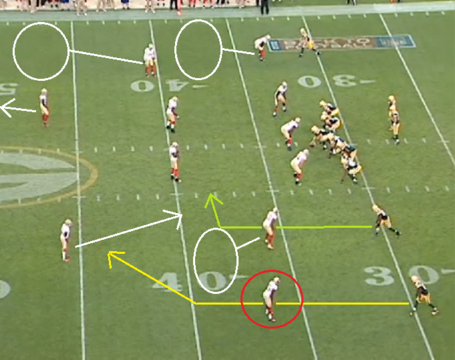 James Jones (yellow) is running the post here. Brown (red) is on him in man coverage.

Whitner, who is playing behind Brown, will dart towards the line at the snap, leaving Brown all alone to cover his guy deep.

Out of all the DBs on this team, the San Francisco game plan for Green Bay seemed to put the most faith in Tarell Brown to contain a guy one-on-one, with or without safety help. 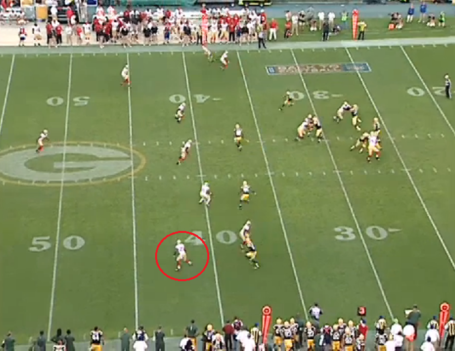 Again, notice the 49ers playing with their bodies square to the line of scrimmage, except Brown. 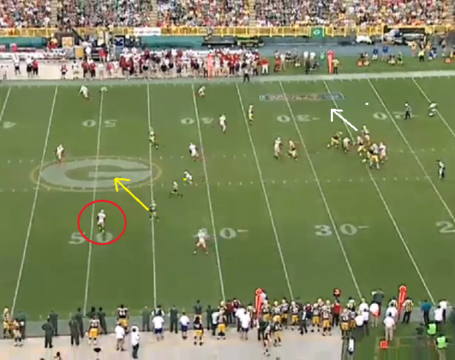 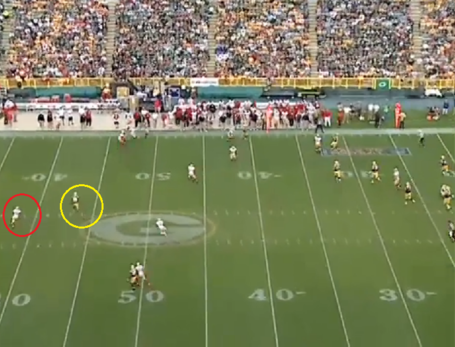 ... and, with Brown most concerned over preventing a touchdown, he gives room underneath to Jones, who catches the ball, makes a move that causes Brown to miss a tackle, and takes it another 23 yards to the San Francisco 19.

This was Brown's worst play of the game, mainly due to the missed tackle. Otherwise, he seems to have played it exactly as dialed.

With the 49ers up by two scores in the 4th, Defensive Coordinator Vic Fangio elected to utilize some prevent and only rush three. I reflected on the problem with this in the last article on Whitner, too; and it rears its ugly head again above. You can't give Rodgers this much time and/or space. I don't care how late in the 4th quarter it is.

Rodgers has tons of time to evade, look down-field, and find a hole in the zone coverage. With Brown perhaps overly-concerned with the deep threat, he seems almost content giving up a 26 yard completion. Now, this is probably the right play based on the way it was called. If Brown makes the tackle, it's a 1st down, sure, but the clock keeps ticking and Green Bay is not even in field goal range.

What is most curious is, even with all the yardage given up, it does appear Brown played both the above plays very well. Take that into consideration with his solid play throughout the day, and the yards given up here, including the missed tackle, still net him an average grade on the day of +0.1

I think that is something I could agree with. Though I would like to hear some different opinions on the plays broken down above if any of y'all feel so inclined!

On Monday, I'll have more film breakdown in the next part of the series as we move on from Week 1 @ GB to whatever game Niners Nation would like to see next.

In the poll below, I've listed the next three games that San Francisco played after Green Bay. We'll move through the season like that, skipping a game or two here or there as democracy sees fit.

So vote in the poll and let us know what we should focus on next.