The 49ers roll out throwback logos for their final season at Candlestick Park.

Share All sharing options for: 49ers set up throw-back logos for final season at Candlestick Park

The San Francisco 49ers get back to training camp this week as they prepare for what will be the last season at Candlestick Park. Although the Stick is not exactly a great-looking stadium, it has an incredible amount of history. Just the three different versions of The Catch bring back crazy memories.

The 49ers are using this final season to celebrate the history of Candlestick Park before it is blown up in the offseason. As part of that, the team is mixing in throw-back logos on the field. The picture above was tweeted out by the 49ers official Twitter account. I do not know yet if that end zone logo will be used for all ten preseason and regular season games, but it's up there for now.

The 49ers also tweeted out this picture of the logo they will be using at the 50-yard line. 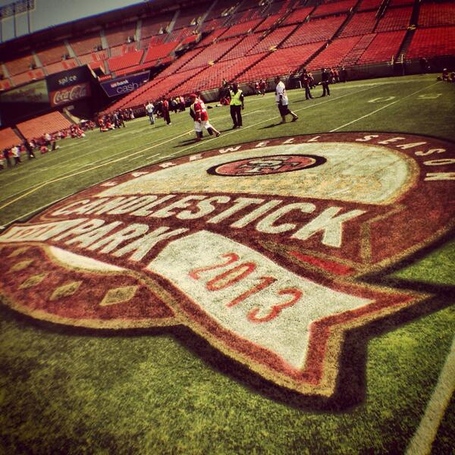 It should be an exciting season, making the farewell tour for Candlestick Park all the more interesting. Speaking of the final season, don't forget to provide us with your memories of experiences at Candlestick Park. I am compiling the memories in that FanPost with plans on organizing it for a front page post leading up to the start of the regular season. When you post your memories in the comments, use separate comments for separate games. Post the date and game in the subject line, and then post your memories of the game in the body of the comment.