We review the All-22 of Ahmad Brook's Week 3 performance against Minnesota to see how he stacks up with Pro Football Focus' grading of his play.

We continue the "Caught on Tape!" series this week with our first look at San Francisco's Week 3 loss to the Minnesota Vikings.

As with every game lost last season, this one came across as an anomaly. A 4th down conversion for a touchdown, a blocked field goal, a 50+ yarder from Blair Walsh to end the half, a rare, long touchdown run (by quarterback Christian Ponder, no less), and so on.

The Vikings ended the first half 5-for-7 on 3rd down, with one of those failed conversions turning into a successful 4th down conversion and a touchdown. Up until the final minutes of the game, Minnesota was 9-for-13 on 3rd/4th down attempts, with 8 of the successful conversions coming by Ponder's arm. Wowzas.

It was frustrating because Minnesota had answers at the most convenient times: the 49ers bend-but-don't-break defense let Minnesota go 3-for-3 in the red zone; the San Francisco offense was moving the ball, but then failing to put points on the board.

A successful drive to pull San Francisco within one score for the first time since the opening whistle was answered with a 7 minute, 86 yard touchdown drive by Ponder and the Vikings. In fact, Minnesota had three 80+ yard drives in the game.

Following the ensuing kick off, a 50 yard return by Kyle Willams to start the 4th was seconds-later negated by a Frank Gore fumble.

Alex Smith, who averaged a 6.74 ANY/A -- right at his season average and 10th best in the league -- had an ill-timed interception when the 49ers might still have had a chance at a comeback. The sack fumble at the end was a cherry on top; or a relished twist of the dagger, depending on your rooting interests.

On top of everything else, San Francisco was penalized 6 times for 60 yards. The Vikings: just once for 10 yards.

Adrian Peterson had his worst yards per attempt average of the entire year (3.44), as the 49er defense contained him well; but enough magic was at work in Minnesota to grant Jim Harbaugh's squad their first loss of the 2012 season, establishing a "two wins, one anomaly" pattern that would persist through December.

With that in mind, we will take a look at the film of some player performances from this game, using Pro Football Focus' grades via their Premium Stats as the treasure map that tells us where to dig.

To start, we will examine some good news. In case you missed the beginning of the series @ Green Bay, we had taken a look at three negative performances and one average one:

So, I figured I would start the Minnesota series off with something positive.

Ahmad Brooks had his best game of the year against the run, grading out to a +4.1. Slowing down Adrian Peterson is as tough as standing tall against a tsunami; but even the best running games in the NFL are shallow waters to the 49ers' brick wall of a front-seven. They rush, they hit, they cascade to the Earth. Wash, rinse, repeat until forced to throw.

As mentioned, Peterson averaged an unspectacular 3.44 yards per carry -- tied for his worst effort of the year. Brooks was a big part of that.

For any play we review, remember that grading is dependent on what is deemed a "success." In advanced stats, gaining 40% of required yards on 1st down is considered successful.

A 3rd down (or 4th down) play is only considered successful if it gains 100% of required yardage.

Our first play here is the third one of the game. A 1st and 10 after Ponder had picked up 12 through the air to Percy Harvin.

Much like Randall Cobb was San Francisco's poison in Week 1, Harvin showed up as the shifty, versatile receiving threat in Minnesota.

AP, in the mean time, had a rougher go of it: 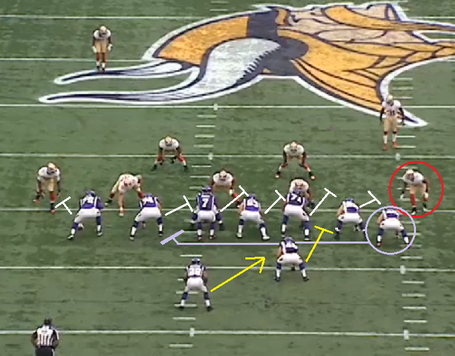 Kyle Rudolph had two touchdowns on the day, which greatly upset me because I had drafted him with high hopes as a TE#2 for my fantasy team and, of course, sat him against the Niners' elite defense.

On this play he is in charge of blocking Ahmad Brooks (red circle) as the other tight end, #40 Rhett Ellison (purple circle), pulls left to take care of Justin Smith, who will be allowed to pass into the backfield while the rest of the line shifts right. 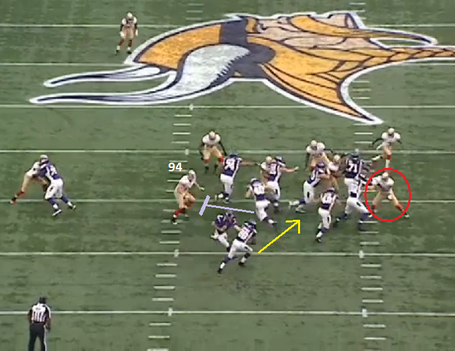 The play already looks pretty dead here. The Vikings have everyone blocked, sure, but they have failed to create any actual holes for Peterson. 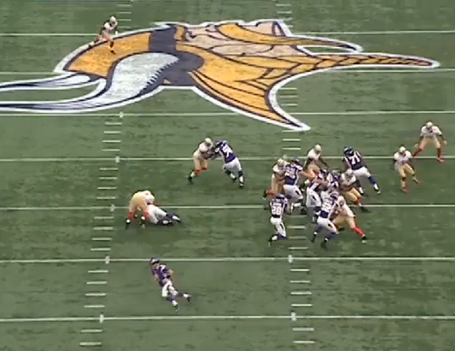 A moment later, Justin Smith is taken out by Rhett while Peterson looks prepared to pick up at least a couple yards. 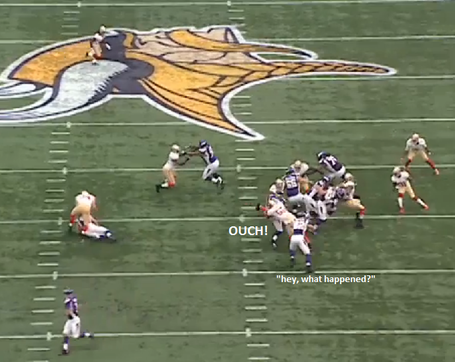 But Brooks gets free of the rookie Rudolph, who, along with almost the entire Minnesota offense, had a poor day run blocking.

Brooks explodes inside and tackles Peterson for no gain.

Not only did he shed a block, but he prevented any gain. A positive grade, no doubt.

Brooks is involved in a couple more tackles, teaming up with NaVorro Bowman and Ray McDonald, respectively, to keep Peterson from exploding for anything more than a small gain.

He also does a decent job in coverage on Rudolph later in the drive, preventing a 1st down after a short reception; and then manages to get a hit and disrupt a pass attempt by Ponder a couple plays later.

Despite all this, the Vikings score a touchdown on their opening drive.

This brings us to the 2nd quarter, with the Vikings up 7 - 3 after a San Francisco field goal. Minnesota drives 47 yards and has a 1st and 10 on the San Francicso 33. 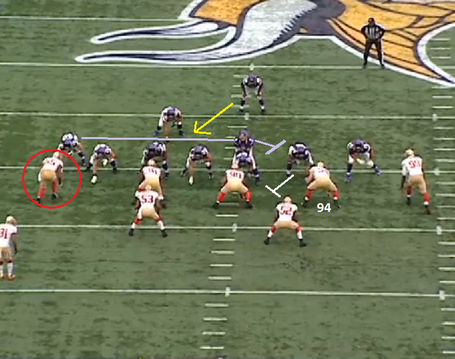 Once again, we have the TE in front of Brooks (red circle) pulling to his left to take out Cowboy, #94.

The Vikings felt that their ability to run would depend on mitigating the misery that is Justin Smith. Don't know where they got that idea. 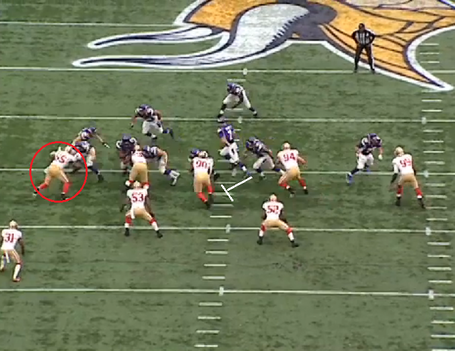 Take note of where Brooks and Rudolph are. The young tight end's feet are set at about the 33/34 yard line. 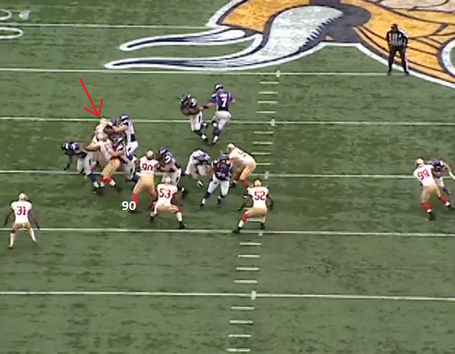 This is the hand-off. The pulling TE is, much like the last play, bulldozing himself into Smith's legs.

There is a fundamental difference here between the way the 49ers pull or wham, and the way other teams pull or wham against Justin Smith.

When the 49ers pull, they stay on their feet, get their hands on the guy in front of them, and drive forward. That's how gladiators do football.

Pulling like that against Cowboy would cause serious injury to the unlucky soul given the task. The best thing to do, for your own health, is cowardly fling yourself at his feet in a pathetic tumbling motion and pray he doesn't stomp on your ribs.

Sullivan was the only gentleman for Minnesota to be given a green grade (i.e., very positive) in run blocking. He achieved that against Sopoaga, who was the clear weak link in the San Francisco front-7 last year. When I highlighted the Rams success in rushing against San Francisco, it was in large part to whamming Sopoaga. I have higher hopes for Glenn Dorsey, but that's a topic for another day.

If you'll scroll back up from my slight digression, you'll notice Peterson and Ponder's feet look like they might be touching.

Peterson does end up tumbling a moment later. But, you will also notice that Ahmad Brooks is man-handling two men -- both Rudolph and the lead-blocking fullback: 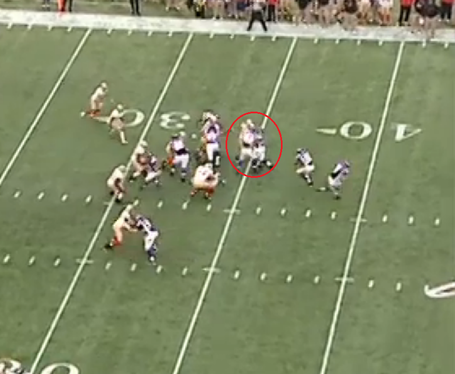 Peterson is still on his feet here, but it is at this moment that he tumbles.

Remember how this play started with Rudolph's feet set at the 33/34, and leaning forward for the block? Above, Brooks has pushed him back about two yards to the 35/36 and into the fullback, whose momentum he has also stunted.

So did Peterson and Ponder get in each other's way, causing a slip? Maybe. But I think the real truth is that All Day saw his two lead blockers colliding hopelessly with one man in a golden helmet and thus stumbled in equivalently hopeless awe.

Regardless, he falls; and Brooks jumps on him for a loss of three.

This final play comes when the game was more-or-less out of reach. We had reached the two minute warning with Minnesota facing a 3rd and 9 at the San Francisco 43. 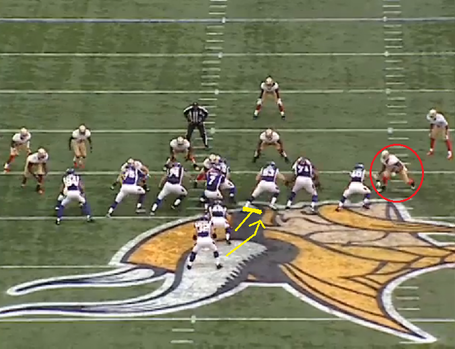 Brooks (red) is outside again, with Rhett in charge of blocking him this time. 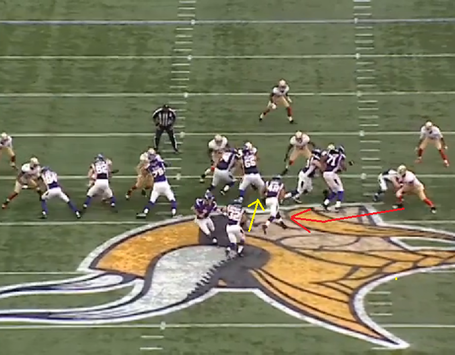 Right at the snap, Brooks jumps outside, eluding Rhett's attempt at a block. Brooks then darts inside to follow the ball-carrier, former Stanford Heisman Trophy runner-up, Toby Gerhart. 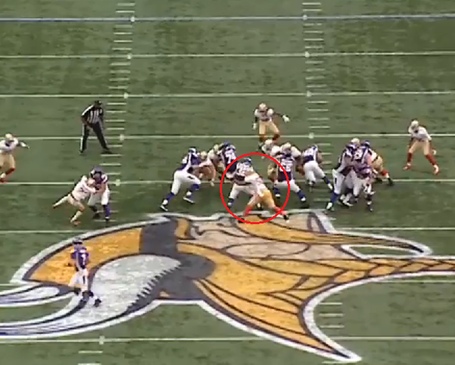 Brooks catches Gerhart from behind and forces a fumble. Carlos Rogers recovers it after the ball bounces about 10 yards up-field.

The run defense, and the play of Ahmad Brooks in particular, was one of the few bright spots in an otherwise-dull performance.

It seems clear that Brooks earned his fantastic +4.1 grade in stopping the run, registering 8 tackles, 1 assist, 7 stops, and 2 forced fumbles according to PFF's game-charting.

I would like to get back to defense for this game at some point. The Vikings quick passing and ability to pick up clutch 3rd downs was frustrating, and well worth a more in-depth review.

But, since all we have featured in this series so far is defense, I figured I would at least put the decision into the hands of our viewing public.

Altogether, I will do two or three more posts on this game. So do vote in the poll below to decide who the very next post should take a look at.

liberty_JAC on the radio tomorrow

I was invited to be on The Sports Buffet on AM 1300 The Zone in Austin, Texas tomorrow to discuss the 49ers. Topics will include Colin Kaepernick, the read option, draft picks, free agent pick-ups, and anything else they wanna ask me.

The show is quite professional, and I am just a measly internet blogger. So if you wanna check it out, please do. I'd of course appreciate any listeners as this is my first time on radio to discuss sports and I'm looking forward to it. I did do some political shows in my days in New Hampshire, but for some reason that was less nerve-racking than live sports talk. Who knew!?

Cheers! And check in again tomorrow for live 49ers talk on The Sports Buffet on AM 1300 The Zone.

democracy is one hundred or so contrarians and two dorks way-too interested in quality o-line play deciding what film to study...