We are just weeks away from kickoff. Let's take a look at the storylines of Week 13's matchup against the St. Louis Rams.

Last month, I wrote about the Rams being on the rise as far as returning to contention in the NFC West. History has proven that the most successful franchises, year in and year out, start at the very top. An organization may boast a talented roster, but it takes a talented front office to assemble that roster and a talented coaching staff to make the pieces fit. It's a small sample size, but it would appear that the Rams, spearheaded by general manager Les Snead and head coach Jeff Fisher, finally have their act together.

St. Louis proved to be quite a nuisance for the San Francisco 49ers last season. Let's take a look at what happened in their two matchups from 2012.

There are four noteworthy performances from this particular game, and at least three of them (most likely all) will be non-factors against the Rams in Week 13.

Alex Smith targeted receiver Michael Crabtree early and often. Crabtree finished the game with five receptions for 70 yards including a 14-yard strike for a touchdown at the start of the second quarter. The offense wouldn't get rolling again until the fourth quarter.

Of course, the big story of the day was when Smith was removed after receiving a blow to the head on a fourth-down conversion attempt. The at-the-time unknown backup Colin Kaepernick was inserted in his place, and thus began the Kaepernick era.

Kap's first taste of NFL action was shaky - he missed quite a few attempts early on and resorted to making plays on his legs - but it didn't take very long for him to settle in. He finished the day with 11 completions to 17 attempts for 117 yards and rushed for 66 yards and a score.

The Rams offense revolved around two players: running back Steven Jackson and receiver Danny Amendola. Jackson has been the bell-cow in St. Louis for most of his career and this day was no different. He received carries early on and 101 total rushing yards is nothing to scoff at especially against San Francisco's run defense.

Amendola was the story of the day. The stat sheet says he had 11 receptions, but it honestly felt more like 111. On the Ram's last offensive drive in regulation, Amendola alone accounted for four receptions for 36 yards and three first-down conversions. The drive ultimately ended with a touchdown reception by Austin Pettis that put the Rams ahead 24-21.

Obviously, Smith is now in Kansas City while Crabtree will be out for most of the regular season with an Achilles' heel injury. And both Jackson and Amendola have relocated to other teams - Jackson in Atlanta and Amendola in New England. Thank god.

Daryl Richardson, who was a more-than-competent spell to Jackson last year, will presumably take the reigns in 2013. And the Rams turned to the draft to find Amendola's replacement by selecting the explosive Tavon Austin from West Virginia. 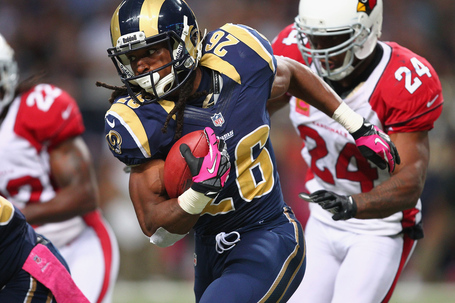 Kap was much more prepared in their second meeting as he achieved 21 completions from 32 attempts for 208 yards and a QBR of 82.4.

While he was still making some "rookie" mistakes (throwing the ball away in the endzone which resulted in an intentional grounding penalty and the ill-fated lateral over the head of Ted Ginn Jr. that was recovered by the Rams for a touchdown), you could begin to see some of the attributes that make him such a special player. He displayed some exceptional arm strength and a surgeon's touch when necessary. And if anyone still doubted his breakaway speed, he silenced them on a blistering 50-yard run down the sideline late in the fourth.

Again, Crabtree was spotlighted with a team-high 11 targets, seven receptions, and 101 receiving yards. Beyond Kaepernick, the running games of both teams were stymied for the most part. Gore rushed for 58 yards on 23 carries, a season-worst average of 2.5 yards per carry. Jackson fared no better with 48 yards on 21 carries.

But in the end, the game was won on special teams. Specifically, it was the leg of rookie sensation Greg Zuerlein that tied the game right before the end of regulation, and that same leg would ultimately sink the Niners in overtime.

Both teams have endured many changes to the roster for better and for worse. Who do you expect to be the biggest difference makers in 2013? Sound off in the comments section below.