We are just weeks away from kickoff. Let's take a look at the storylines of Week 14's matchup against the Tampa Bay Buccaneers.

The Tampa Bay Buccaneers have been something of an anomaly over the years. One year, they're hot, and the next, they're cold. And if you can believe it, it's been this way since they won the Super Bowl back in 2002. Seriously. It's fascinating. However, for the sake of this article, what's most relevant is what's most recent. And if we're to believe in history, the Bucs seem to be trending upward.

Head coach Raheem Morris was canned after the 2011 season as the Bucs finished with a 4-12 record and last place in the NFC South. A major disappointment considering all of the optimism that followed a 10-6 record the previous year.

The San Francisco 49ers were just coming off a successful season under head coach Jim Harbaugh, plucked fresh from 'the Farm.' The year before that, the Seattle Seahawks saw a divisional title and playoff berth under Pete Carroll who brought multiple national titles to the University of Southern California. Tampa Bay would continue the trend by searching for their next head coach among the college ranks. They found Greg Schiano from Rutgers.

The New Jersey-native Schiano is your classic, hard-nosed drill instructor, a stark contrast to Morris' more lax and laid-back coaching approach. Schiano's first season with the Bucs was a bit of a mixed bag. Again, hot one minute, cold the next. A three-game losing streak was followed by a four-game winning streak which was followed by a five-game losing streak. See what I mean?

In 2012, the biggest stink in Tampa Bay was the defensive backfield. Last season, the Bucs ranked dead-last in the league in pass defense. They allowed, on average, 297.4 passing yards per game and by season's end, surrendered a league-worst 4,758 yards.

Plugging the holes in the pass defense was the priority this offseason, and they did just that. The Bucs courted All-Pro safety Dashon Goldson away from the Niners on a five-year, $41.25 million contract, traded for Darrelle Revis and made him the highest-paid defensive back in NFL history, and spent their first draft pick this year on Mississippi State cornerback Johnthan Banks. That's all in addition to safety Mark Barron who the Bucs drafted seventh-overall in the 2011 NFL Draft.

When you play in the same division as guys like Matt Ryan and Drew Brees, a good secondary is absolutely crucial, so good on the Bucs for addressing the issue. 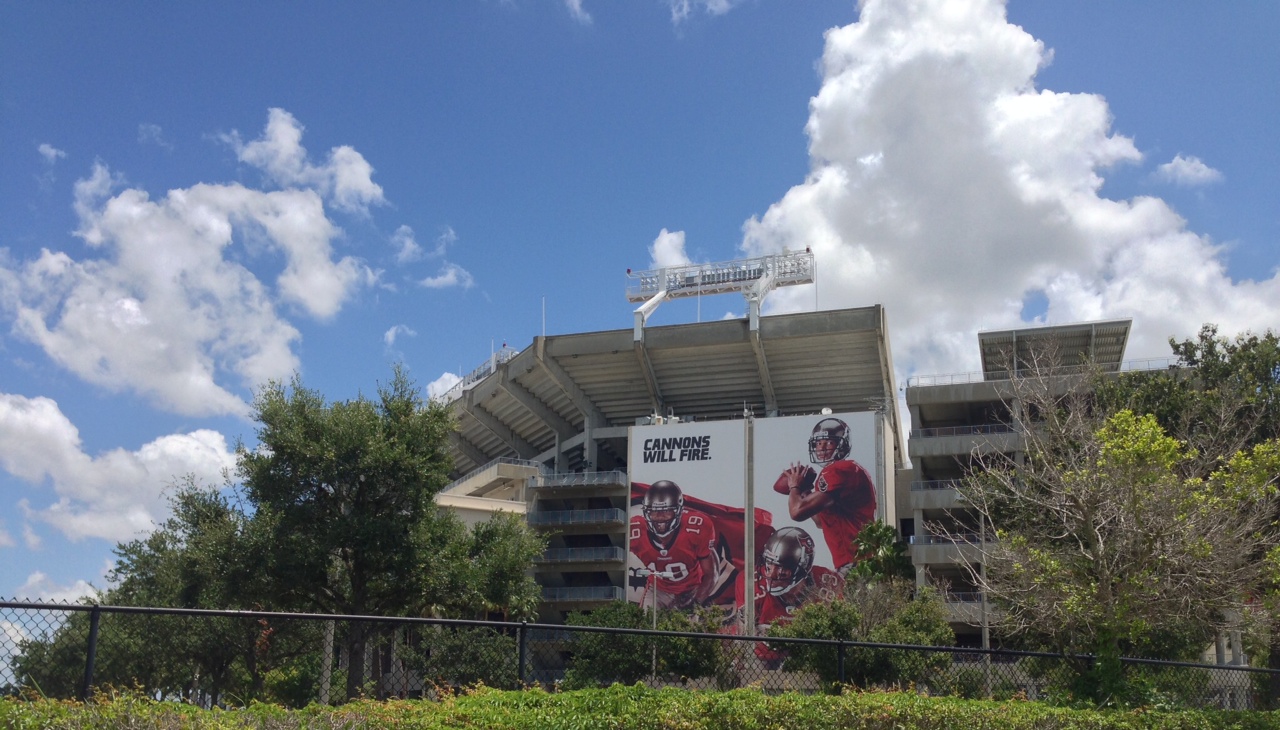 Earlier this month, I spent a week down in Tampa, Florida visiting family and digging my toes in the sand. Driving along Dale Mabry Highway, I knew that a visit to Raymond James Stadium was a must. So, I parked the family van right in front of the entrance to the stadium and, like a shameless tourist, snapped a bunch of photos.

Besides the beautiful weather, what do you see? That's quarterback Josh Freeman pictured above receivers Mike Williams and Vincent Jackson, and the text: "Cannons Will Fire."

Cannons will fire at Raymond James Stadium at some point, but how often they do depends on the success of the Bucs' young quarterback. The 25-year-old Freeman (the same age as Colin Kaepernick) has had a highly-inconsistent NFL career thus far.

With the Atlanta Falcons and New Orleans Saints stealing all of the divisional headlines, the Buccaneers may be the most overlooked team heading into 2013. However, this is the most talented roster Tampa Bay has had in years. Don't be surprised to see the Bucs shaking things up in the South this season.