Colin Kaepernick sports a Miami Dolphins cap at a 4th of July party, sparking outrage with some 49ers fans. We look at why it generates such emotion and how not to be a crazy girlfriend fan.

Share All sharing options for: 49ers fans are like crazy girlfriends when it comes to Colin Kaepernick

Yesterday, Colin Kaepernick showed up at a 4th of July party shirtless. Normally, that sparks plenty of responses, but Miami Dolphins fans were quick to pounce on another detail. Brace yourselves, Kap was sporting a Dolphins cap.

#Dolphins are at point that other teams' franchise QBs try to pass as members. Nice hat Kaepernick! @NinersNation pic.twitter.com/aTNIxyoMKU

And, the Phinsider didn't quit there.

Hey @NinersNation - Just wanted to give you another look at Kaepernick sporting that epic hat! #Dolphins pic.twitter.com/uxpKVKbkD4

This exchange was obviously tongue and cheek, but what is funny is the reaction of some 49ers fans. There were obviously some who dismissed the hat, knowing Kap collects caps and sports a lot of teams. Others, were outraged.

Honestly, these outraged fans are making a mountain out of a molehill, but it shouldn't surprise anyone. I completely understand it.

I have always compared football fans to crazy girlfriends. You know the kind of crazy, right? Not serial killer or anything. But, the crazy when emotion gives way to reasonable behavior. You know, the girlfriends that are severely sensitive and controlling, it is unbearable? 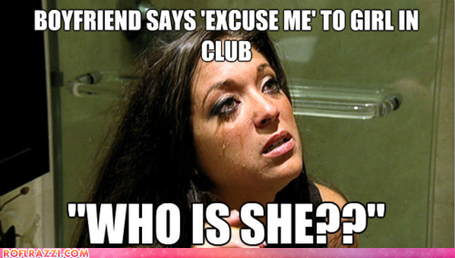 You know it's true.

Colin Kaepernick is not exempt from crazy girlfriend fans. And, maybe you're one of them? I will level with you, my first reaction was "at least it's not a Cowboys' hat." In other words, "Anybody but her!"

I was quick to check my emotions. The first step is understanding why your behavior is borderline psychotic. If feelings reach a point where anger becomes the primary emotion, you probably need to take a step back and breath.

After all, it's just a hat. Kap has lots of them. He also has over 400 pairs of shoes. It is just an accessory, it doesn't mean anything. It is you he cares about. His 49ers hold the most meaning and value. Maybe he was a little insensitive, but chill out. So, he looked at another "girl?" It doesn't mean anything. Maybe it is YOU who needs constant affection? It's obvious Kap adores you, he's not singling out the affection of Dolphins fans. Don't worry, Kap isn't going anywhere.