49ers QB Colin Kaepernick made an appearance on the cover of GQ magazine. We take a look at some photos and videos from the photo shoot, as well as the accompanying article.

Share All sharing options for: Colin Kaepernick appears on cover of GQ Magazine

The Summer of Kap has come to an end with the start of the NFL season, but Kap is getting one more opportunity to continue his crossover appeal. The 49ers third year quarterback made an appearance in the recent issue of GQ Magazine, getting a photo shoot for the cover: 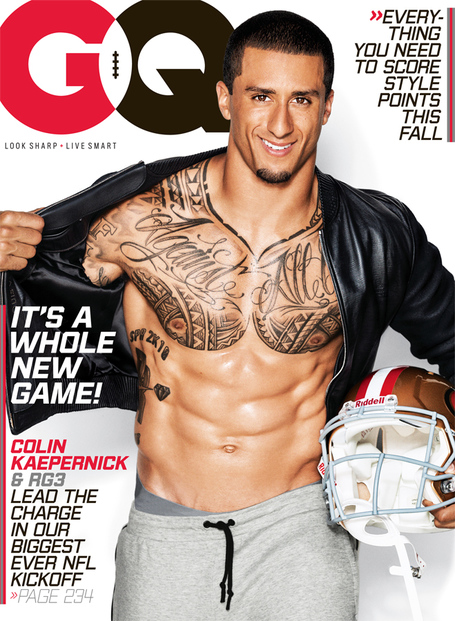 The accompanying article hits on a lot of the usual points, but it is extremely well-written, and worth a read. There is also a slide show from the photo shoot to go with it, if you want to check out more of tattoos. That's quite the impressive collection of tattoos! Here is one of the pictures GQ sent along. 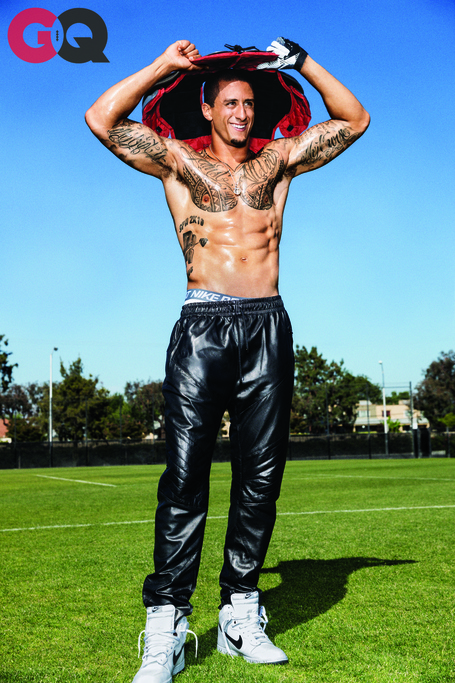 The article is in the print version of the magazine, but they also sent along this video in which they touch on various topics.

It's been a roller-coaster year for Kap, but it seems like he is taking it in stride. He was working out a week after the Super Bowl, and all reports from training camp have discussed how he is leaps and bounds ahead of the rest of the quarterbacks. This is not surprising, and probably good that he's far ahead of them, but it's still good to know he is showing good things, and continuing to work hard.

If he can put together a 2013 season, his stock will only continue to climb.