Lawrence Okoye watch: Breaking down the "Great Brit" in 49ers vs. Broncos

We break down Lawrence Okoye's first game in the NFL. How did the former Olympian perform against the Broncos?

Share All sharing options for: Lawrence Okoye watch: Breaking down the "Great Brit" in 49ers vs. Broncos

It is easy for all of us to get excited for that first preseason game of the season, but for Lawrence Okoye, this was one of the biggest moments of his life. The former Olympian discus thrower made his debut in live NFL action, stepping on the field at right defensive tackle, with a little under five minutes remaining in the fourth quarter. Given the unique nature of his development in the NFL, I am going to post something each week about his performance. We also have a story stream covering all Lawrence Okoye news and analysis.

In the days leading up to the game, Okoye met with reporters and discussed his development, and the process in place. That's also when he mentioned that some people called him Great Brit during the training process for the combine. My favorite line was how he felt the first step was developing into a "bad football player." When you are starting from nothing, you have to become bad at something and slowly learn the keys to become adequate, decent, good and then great. For most of us, we don't even think about the value of being "bad" at something. However, it is even applicable to a guy like rookie free safety Eric Reid. Donte Whitner pointed out how you learn from mistakes, and throwing a guy in the deep end can be a valuable experience.

I don't think Okoye quite got thrown into the deep end, but he did get a chance to show what he has learned this offseason. There wasn't a lot of "good" in what we saw, but getting him on the field was a big step forward.

Okoye got six snaps with the defense and one one special teams. The defense snaps were split evenly between the final two Broncos series of the game, and two of the six snaps were on kneel downs to close out the game. Three of the plays were runs, one was a pass and two were kneel downs.

On the first two run plays, the running back went away from Okoye. On the first play, Lance Ball went right between center and guard Jacob Hester was offset that side, but then cut over to block Okoye, and potentially open up a cutback. When Hester came at Okoye, it seemed like Okoye hesitated and sort of went to tackle him, as if he had the ball. There was a little bit of confusion, which is to be expected for a guy who has no experience upon which to base his instincts.

On the next play, the Broncos again ran Lance Ball toward the right side, and they had the left tackle and guard double-team Okoye, again opening up the cut-back lane. Here is a picture of Okoye getting double-teamed: 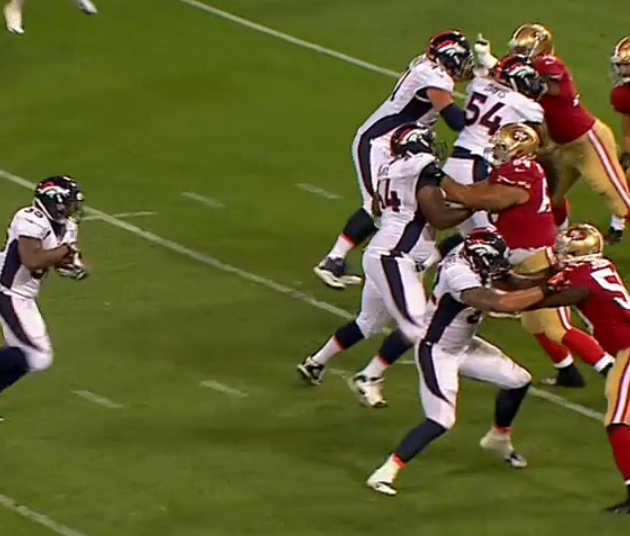 Okoye is at the top of the screen, getting easily double-teamed. One area he has to work on is improving his leverage. As a tall guy, it's easy to get stood up, rather than get down low. You could see that in his limited action last night.

The following play, the Broncos ran play action, and Zac Dysert rolled to his left. Okoye briefly bit on the play action, but quickly recovered to start moving back toward Dysert. Dan Skuta made the sack on the play, but it was probably the "best" moment of the night for Okoye.

It was only six defensive snaps, so we can only take so much from his performance. We could see the leverage issues, and the nose for the ball is not quite there yet. Neither is a surprise. I don't know if we'll see any kind of improvement next week against the Chiefs, but I really do hope he gets into all four preseason games. Even just a handful of snaps could potentially show us a little bit more about him each week.

As it currently stands, even with some improvement, he seems destined for the practice squad. The 49ers have to waive him and hope nobody claims him, but given what we saw last night, I would be surprised to see a team spend a spot on their 53-man roster on such a significant project. This puts Okoye in a position to stick with the 49ers and continue learning from DL coach Jim Tomsula, and the numerous veterans on the roster.