Eric Reid with a strong debut in 49ers-Packers

49ers free safety Eric Reid made his NFL debut on Sunday, and boy was it a good one. The rookie showed poise and sound fundamentals as he was one of the reasons the 49ers came away with a victory.

Share All sharing options for: Eric Reid with a strong debut in 49ers-Packers

The San Francisco 49ers emerged victorious with a 34-28 decision on Sunday against the Green Bay Packers. The defense had its ups and downs, but they managed to make enough plays to lock up the win. One of the highlights on defense was the performance of rookie free safety Eric Reid. The 49ers let All-Pro safety Dashon Goldson walk in free agency, and then traded up in the first round of the 2013 NFL Draft to secure the services of Reid.

It's only been one game, but Eric Reid got off to a very strong start in his debut at free safety. I don't have access to the All-22 film yet, but from what I was able to watch on a replay of the game, it was a lot more good than bad from Reid. We saw a guy with sound tackling fundamentals (for the most part), generally good poise, and a bit of a nose for the ball.

Reid was one of five defensive players to play all 62 snaps. I went back through all the defensive snaps, and tried to pull out some of the more interesting plays. I found seven particularly significant plays worth touching on in some form or fashion.

Aaron Rodgers scrambled around on this play and eventually turned to throw to Jordy Nelson on a short pass, a couple yards short of the first down marker. I want to check out the All-22 on this one to see where Nelson broke off his route, and how Reid pursued him. Reid had a poor angle and could not tackle Nelson at the legs. This allowed Nelson to break free for a 22-yard gain, instead of only a one or two yard gain.

Reid secured his first career interception on a pass that deflected off Finley's hands. He was in the right place at the right time, and benefited accordingly.

The Packers had a 3rd and 20, and Aldon Smith jumped off sides before the snap. Aaron Rodgers waved his receivers deep for the free play, and fired one deep to Randall Cobb. Reid got the jump on Cobb however, and went up for the pick. Cobb came in over him and grabbed at the ball, but the referee rightfully ruled Reid had possession. The interception was negated by the penalty, but it prevented the Packers from scoring on that particularly play.

3rd quarter, 8:20 3rd and 8 - dump off to Randall Cobb, Reid flies in and wraps up Cobb for the stop after gain of a couple

This was one of my favorite plays on the day. The Packers had a 3rd and 8, and Rodgers dumped off a pass to Cobb, who had open space in front of him. Here is a quick screen shot as Cobb catches the ball. Notice who is flying in on the right side of the screen. 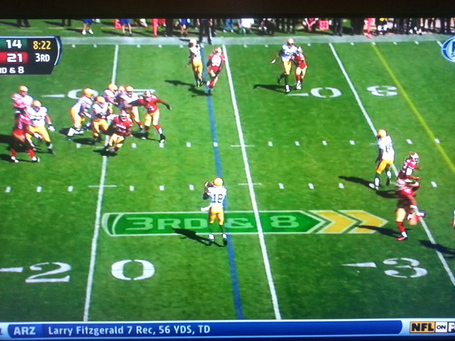 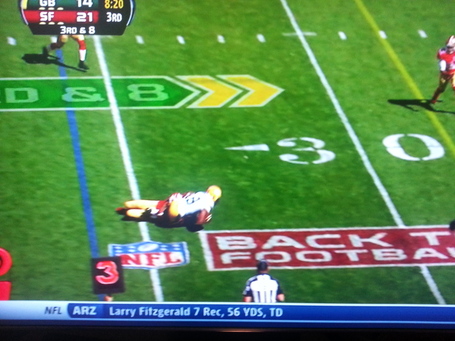 One thing you may have noticed about Reid is that he is generally a very sound tackler. He missed the tackle on Nelson, as well as one other one on Cobb (to some extent), but he knows how to wrap up.

3rd quarter, 4:45 to go - Packers convert first down, Reid gets tackle of Cobb - did not just go for kill shot - went for wrap up

This was another example of the wrap up. Reid had several instances where he could have launched himself as we sometimes saw with Dashon Goldson. While Goldson would make big plays, he also found ways to either draw a penalty for unnecessary roughness (as he did Sunday for the Bucs), or he would take himself out of the play because of a poorly-timed dive.

Reid will not be perfect this year, but it is nice to see him doing a good job wrapping up opposing players.

Reid got into a bad position, and was unable to wrap up Cobb on this play. He did trip him up, and cause him to go down, but had he not, Cobb likely was getting into the end zone.

4th quarter, 5:41 to go 2nd and 10 - Rodgers steps up in pocket and scrambles for 7 yards - Reid closes quickly for tackle before first down

This final play was another one where we saw the serious closing speed Reid brings to the table. Much like the Cobb play above (with pictures), Reid came from off the television screen in half a heart-beat and got the big tackle on Aaron Rodgers.

This was also a play where Dashon Goldson likely would have gone for the monster hit on the scrambling Rodgers. When Rodgers got out of the pocket, he stayed up trying to get the first down late in the game. He was set up for a huge hit, and while Reid did hit him hard, it was a very clean, technically sound tackle.

And right now, that's the best part about all this. He showed sound fundamentals in his debut game. He'll make mistakes, but as Jim Harbaugh and Vic Fangio has both said, he's not a guy to repeat his mistakes. He learns from them and moves on.

It does help to be surrounded by a veteran defense. Jim Harbaugh had an interesting anecdote from Sunday:

"Ever since he's been here he's picked things up extremely fast and it's early on. We're not going to have to worry about Eric Reid in terms of picking up the defense, where his alignment should be, what his assignments are. He does a great job in that regard. Very smart. I had a chance to, it was interesting, I was walking out the tunnel as we're getting ready to start the game, and walking behind Eric Reid and Justin Smith and the last thing Justin told him was, ‘stay back, stay the heck back. Today we'll take care of everything up front.' He was coaching him right there to the end and he did a nice job."

It certainly helps having those kinds of guys there to help out.