49ers vs. Packers: Vernon Davis and a variation of "Spider Y Banana"

Taking a look at the late third-down conversion by Vernon Davis on a play similar to the famous "Spider Y Banana".

Share All sharing options for: 49ers vs. Packers: Vernon Davis and a variation of "Spider Y Banana"

Last night I sat down before bed and watched the entire 49ers vs. Packers game for the second time, which meant I'd now seen the fourth quarter for the third time, too. One of the plays late in the game was a key third-down conversion that came courtesy of a pass to Vernon Davis in the left flat.

I remember thinking the second time I watched this play, "Man, that looked easy. How did he get left alone like that?"

Then I recalled a conversation Grant and I had on the podcast a few weeks back, where he brought up one of Jon Gruden's favorite plays: the Spider Y Banana. The play involves the fullback leaking out into the flat and getting the pass thrown his way, usually wide open.

I started thinking about how Davis was similarly wide open in the flat, and so I decided to go back and take a closer look at the play. The first thing I noticed was that Davis was lined up in the backfield alongside Colin Kaepernick, but closer to the line-of-scrimmage than Frank Gore, who was behind Kap. So, technically Davis was the fullback on this play, based on his alignment, and he did go from that spot, out into the flat for the pass. Maybe this was the same play?

After looking at the original grease-board drawing by Andrew Luck during Gruden's Quarterback Camp, I found plenty of similarities, but the two plays aren't 100% the same. Here is an image of the 49ers personnel alignment on top, and then the play as drawn-up by Luck during the show: 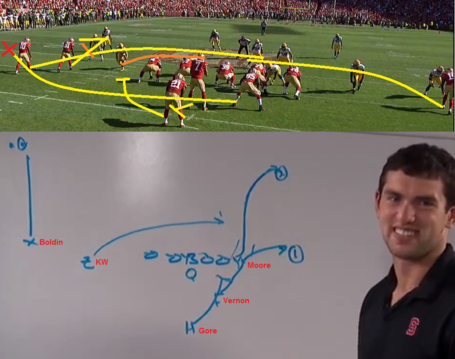 You can see that first of all, the play Luck drew-up is going to the strong side. This is technically called Green Right Slot Strong. Green Right refers to 21 personnel (or 2 backs, 1 tight end), Slot refers to the Z receiver being in the slot, and Strong refers to the FB offset to the tight-end's side.

The 49ers were in a slightly different alignment, with the slot receiver up on the line and the outside guy backed off the line, and they also used Marlon Moore flexed off the right tackle instead of a true tight end. The basic concepts of the play remain the same, though.

The other big difference is that the 49ers ran this play to the weak side. In the illustration Luck drew-up, the line will slide protection to the right, where the handoff is faked to the halfback, giving the illusion that it's a power-run off right tackle.

The 49ers ran the line to the right, or strong side, but faked the handoff to the left like a backside run, and also threw to the left. The idea is that the offensive line's movement to the right, coupled with the fullback (Davis, in this case) being offset to the right, helps get the defense's front-seven flowing to that side and away from where the ball is actually going. The 49ers run the football to the backside in this manner at times, too, so the run-fake to Gore is believable, also.

The Packers are in man coverage, not surprising since it's third-and-short and they need a stop. This plays into the 49ers hands perfectly. As you can see in the route diagram, Kyle Williams runs a shallow crosser and brings his man with him to the right side, away from where Davis is running his route. Anquan Boldin runs the option route (fade/stop) and brings his man deeper down the field, opening up the flat for Davis, who's wide open.

The defensive line and most of the linebackers have bought either the slide to the right by the offensive line, or crashed on the fake handoff to Gore, leaving nobody to chase Davis, who runs for over 10 yards after the catch.

You'll notice that Marlon Moore runs a crosser, too, which I'm not entirely sure the purpose of that. This would make me think the play can't be called "Y Banana", because Moore doesn't run the corner route (that is shaped kind of like a banana). Perhaps it should be called "Spider Y Cross" instead, but I'm not sure (though I'm certain someone in the comments will be).

At any rate it was a successful play, and one we've seen Bruce Miller run a few times, too. If the Seahawks play as much man coverage as they tend to prefer, we could see plays like this having some good success on Sunday, too.

Below is one last image, where I took Luck's grease-board drawing and moved all the pieces around to match-up with what the 49ers actually did on the play in question.

I hope you enjoyed this play and this post! I had fun doing it!