Seahawks vs. Panthers: Game notes from a Niners-fan perspective

I took a look at the Seattle vs. Carolina game from week 1 and made some notes.

Share All sharing options for: Seahawks vs. Panthers: Game notes from a Niners-fan perspective

Being that the 49ers play the Seahawks this week, I decided to go back and observe some things from Seattle's last game vs. the Carolina Panthers. Granted they probably won't play the Niners exactly the same, I figured I could at least finds some strengths and weaknesses in their personnel, at the very least.

The first thing I noticed is that Seattle's defensive line was pushed around from the get-go. They looked like they were 2-gapping (playing head-up on the guy across from them, prepared to make a play on either side of them) but they were being pushed back and even to the ground at times.

Boy, Seattle played a lot of man coverage early in this game. They even had Kam Chancellor manned-up on the slot receiver, which makes me salivate, a little...

Seattle's offensive line was getting driven backwards on every passing play of the first drive. The pocket was collapsing on him from the middle with no lanes to run through. We hope Justin Smith and Ray McDonald are able to have similar success in this way, as it limits QB runs when the whole pocket collapses.

O'Brien Schofield rushed the edge against Jordan Gross on Carolina's second drive. Newton had a deep drop, so he backed right up into the sweet-spot for a guy coming around the outside. Newton had room to step up but didn't feel the rush in time and was caught by the shoestrings.

Russell Wilson had all kinds of time on a play-action pass play with around 5:40 left in the first quarter. He ran all over the place and eventually threw a dangerously high pass that was tipped and nearly picked-off. On the next play there was pressure right up the middle and Wilson quickly got the ball out, well out of bounds.

A few plays in a row here where Richard Sherman played off-man coverage on Steve Smith. He kept his depth throughout the release, which allowed Smith to break and catch a quick pass on a corner route for a first down. You have to watch for a break on the ball in those situations, though, because if Sherman can read the route he'll bait you into a seemingly open throw. Gotta throw it quick and hard.

Cam Newton had Greg Olsen on a seam route against man coverage with safety over top but he just didn't get the ball out quick enough. You'll also notice from the All-22 shot below (click to enlarge) that Brandon LaFell was wide open down the opposite seam as the safety was committing to Olsen and never got to the middle of the field. These are the little things that turn into big plays. 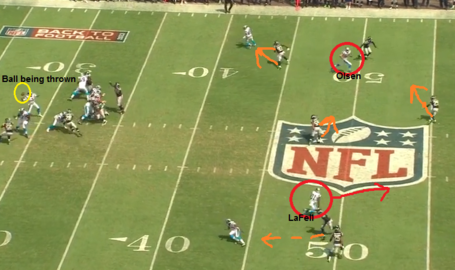 Seattle was locking up on the defensive linemen on their run plays. They had the legal holds of the shoulder pads, inside, and Carolina wasn't able to disengage. They held their blocks for more than a second or two, as well. The 49ers need to do more of this as often times they block for a second then seem to give up.

The Seahawks also were doing a lot of straight drive-blocking, head-up, no pulling guards, nothing.

If you stick with the receivers, Wilson will hold onto the ball and look to get outside. That means that if the pass-rush can hem him in, there is a good chance of a sack. Not rocket-science, but I did notice he was holding on to the ball a bit, so I checked, and yeah, guys were mostly covered.

The Seahawks released their back-side linemen to the second level on some off-tackle runs, but the Panthers DL was quick enough to chase Lynch down. Justin Smith falls into that category, too.

Seattle likes WR screens, at least they ran quite a few vs. Carolina. 49ers must tackle better this week if that's the case.

Walter Thurmond gave Steve Smith a LOT of cushion on the outside. Allowed Smith to come back on routes and catch easy passes along the sideline.

Remember the play in the picture above? Newton tried to hit LaFell on that seam route late in the third quarter, between the corner and safety, but just barely overthrew it. Something to watch for with the 49ers and Vernon Davis, who loves to run the seam.

Seattle played a ton of coverage early in the 4th quarter, surprising to me because the score was 7-6, Carolina. They had guys dropping so deep in zone that you couldn't see anything but the linemen in the TV angle. Yet the Panthers didn't take advantage with anything underneath and instead Newton ran around, they came up short, and they punted.

This game was full of unsportsmanlike penalties.

Pete Carroll's gum-chewing is out of hand. I know Jim Harbaugh has his quirks about him, but Carroll is chomping, mouth wide-open, non-stop, while squinting with one eye like a horse chewing hay with a carrot up it's rear-end. Just sayin...

At this point I can't watch any more. It was hard enough to watch a Seahawks game that didn't involve the 49ers, and I've had just about all that I can take. Let's hope the 49ers can take something from this game and exploit Seattle, at home, to take bragging rights back to The Bay where they belong.