Clay Matthews, Anquan Boldin and Ahmad Brooks were all fined for actions during Sunday's game. We take a look at why Boldin should not have been fined. New to Niners Nation? Sign up here and join the discussion!

The NFL made fines official and available today, and as many expected Green Bay Packers outside linebacker Clay Matthews was fined for his late hit on 49ers quarterback Colin Kaepernick. The NFL fined Matthews $15,000 for his hit. As I understand it, he has never previously been fined for a late hit.

According to the multiple media reports on the fines, 49ers OLB Ahmad Brooks was fined $12,750 for his late hit on Packers QB Aaron Rodgers. Brooks was also penalized on the play. Here is a quick picture of him dropping his shoulder into the back of Rodgers after the play. On replay, it was a legit call. 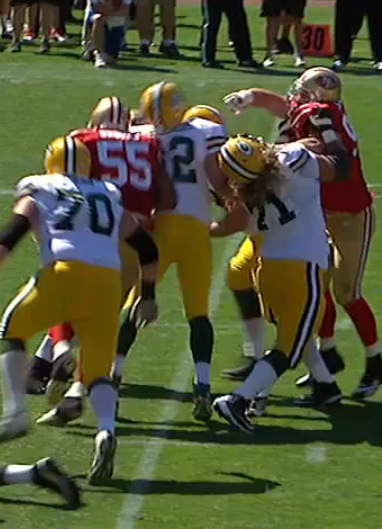 Finally, WR Anquan Boldin was fined $7,875 for a late hit against Packers defensive end Jarrett Bush. While the Brooks hit was after the play and clearly unnecessary, I'm not sure Boldin's penalty is appropriate. I believe the block came on Colin Kaepernick's 15-yard scramble with 1:12 left in the third quarter. As he is going out of bounds, Boldin lowered his shoulder to block cornerback Jarrett Bush. Tre and I each took a picture of the hit from different angles. 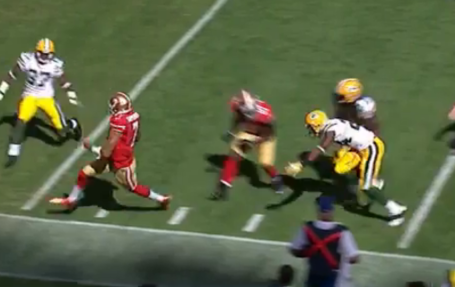 This first picture shows Boldin lowering his shoulder on Bush while Kap is still clearly in bounds. I re-watched the play several times, but could not make out a specific whistle ending the play. That being said, the blocking motion seems pretty clear while Kap is preparing to go out of bounds, and Boldin is not looking at him. 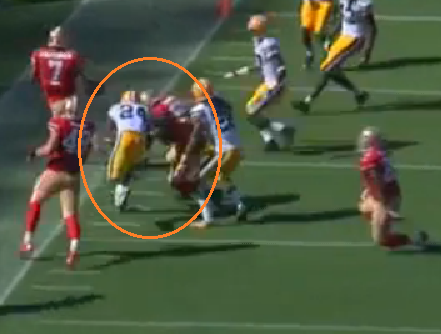 This second image shows Boldin engaged in the block as Kaepernick is out of bounds. If this had been the first of it, I suppose I could see the reason for a fine, but as the previous picture shows, the block began while Kap was still in bounds. I understand protecting against unnecessary physicality, but is the NFL saying Boldin should have just let Bush run right by?