The 49ers suffered a brutal loss to the Seahawks, but the bigger issue was the numerous injuries suffered in the game. We break down the injury report. New to Niners Nation? Sign up here and join the discussion!

The San Francisco 49ers struggled mightily en route to a 29-3 defeat at the hands of the Seattle Seahawks, but the most important issue for the immediate future has to be the injuries. The 49ers and Seahawks play physical football, and the 49ers were on the receiving end of serious punishment. The team lost several players, with Ian Williams potentially lost for a couple months or more.

The injury report breaks down as follows:

The 49ers nose tackle was blocked legally, but in a cut-block manner that has often raised eyebrows. Williams went down and it wasn't pretty. He was helped off the field and carted back to the locker room. Here is a picture of the block. I took it before things got gnarly, but this will show you the cut block: 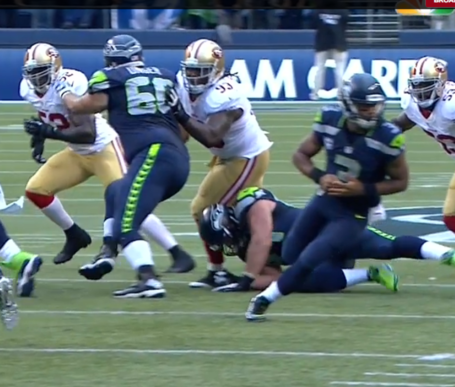 Max Unger can be seen going at Williams' lower legs on this run block. It is a legal block, but defensive players have long had a problem with it. After the game, Patrick Willis and Ray McDonald both spoke out about cut blocks:

Willis: "I feel like as a linebacker or a D-lineman, any cut, it's a man sport - be a man, hit me up high. Hit like rams. You don't see a ram going and cutting another ram's legs. They hit head to head, pad to pad."

McDonald: "They have to do something about that. They're making all these rules for QBs and receivers. They got to find a way to protect the big fellas on the inside because a lot of dudes get hurt that way. That's how Brian Cushing got hurt last year."

In the post-game press conference, Jim Harbaugh stated that he anticipates Williams has a broken ankle, but was waiting on x-rays. It is likely that the team will also put him through a CT or MRI to check for any ligament damage. If it's strictly a broken ankle, the team would be looking at rehab somewhere in the range of six to eight weeks, give or take. If there is ligament damage, it would be a longer absence. The 49ers already used their injured reserve with return designation on Nick Moody. If it's just a clean broken ankle, my guess is they will simply deactivate him each week. If it's more than that, we'll see the injured reserve.

The free safety made a big tackle of Seahawks wide receiver Sidney Rice, only to take a shot to the side of his head as he wrapped up. Reid went down and the medical staff was quickly out there. The team's medical director was talking to him, and eventually he got up and walked off the field. As Reid walked off he was smiling and saying he was OK. He was taken to the back and Michelle Tafoya reported that he was getting tested for concussion-like symptoms. Assuming it does end up proving to be a concussion, Reid would then go through the NFL's concussion protocol to return to action.

The hamstring injury happened late in the game, I believe on the play where Richard Sherman intercepted a Colin Kaepernick pass to VD. Davis did not make a play on Sherman, and I believe the hamstring was the issue. There is no word yet on the severity, so we'll see what Wednesday's first practice participation report brings.

He went down and eventually walked off the field with a bit of a limp. He was unassisted so that is certainly a positive. Matt Maiocco reported after the game that his ankle x-ray came back negative.