The Booth Review - 49ers vs. Seahawks

“I don’t think any of us are proud of our performance tonight.”

Welcome back to The Booth Review. On Sunday night, the San Francisco 49ers suffered a humiliating loss at the hands of Marshawn Lynch and the Seattle Seahawks. What went wrong? Well...plenty.

It's no secret that the San Francisco 49ers and Seattle Seahawks share a history of bad blood. The long-standing rivalry between Jim Harbaugh and Pete Carroll, even before they arrived at their current respective positions in the NFL, is well-documented (and I won't insult your intelligence to regurgitate it once more).

Two of the league's premier franchises, and early Super Bowl favorites, meeting in the most turbulent environment in professional football. It had all the makings to merit a spot on the Sunday night stage. We all expected, at the very least, a competitive bout from both teams.

For the Faithful, it was disgraceful, embarrassing, and without a doubt, the worst game I have ever witnessed in the Harbaugh era. 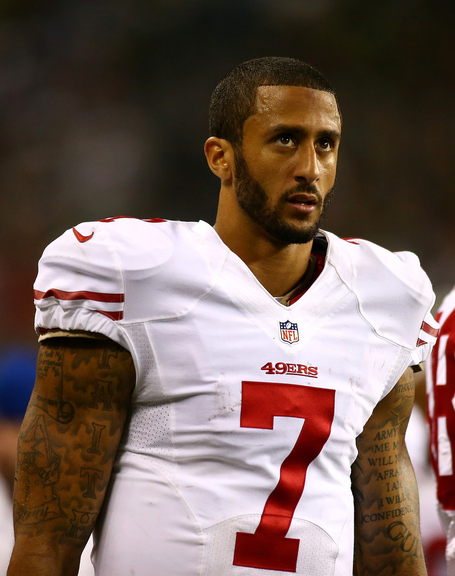 Regarding San Francisco's offensive performance on Sunday night, I can break it down for you quite punctually: there was none.

Against Green Bay in Week 1, the Niners were blisteringly fast and frighteningly efficient - a well-oiled, sleek and sexy sports car. Against Seattle, they sputtered along all night like a dilapidated station wagon running on empty. It was a confounding far cry from what we've come to expect of a Harbaugh-coached unit.

Just how bad was it?

By halftime, San Francisco's offense had only produced a miserable 62 total offensive yards in addition to a fumble, interception, and safety - the prestigious triple crown of offensive deficiency.

"I was certainly not proud of the way we played tonight, or coached. It wasn't our finest hour," Harbaugh said in his post-game press conference. "It just wasn't good enough."

"I don't feel like we put our players in a position to be successful, because we certainly didn't make enough plays to be successful," Harbaugh continues. "I don't think any of us are proud of our performance tonight."

"We're not going to win games if I play like that." - Colin Kaepernick

"There were a couple of times where we got things going. We just stalled," said Kaepernick. "We didn't come out and perform. We didn't make plays like we normally do. We just didn't play well.

"We're not going to win games if I play like that. There were a couple of balls that I tried to force in there and tried to get something going. We just didn't perform."

For a team with as many offensive weapons as San Francisco, they would stand to be a nightmare for most defenses. But against Seattle, we saw precisely what will happen when their playmakers are systematically removed from the equation.

If it seemed like fullback Bruce Miller was being targeted so often, your eyes did not deceive you. Miller was targeted five times - tied for the second-most on the team. The reason? Anquan Boldin, Vernon Davis, and the rest of the receivers were blanketed all night by a suffocating secondary led by Richard Sherman. The offense came unraveled. 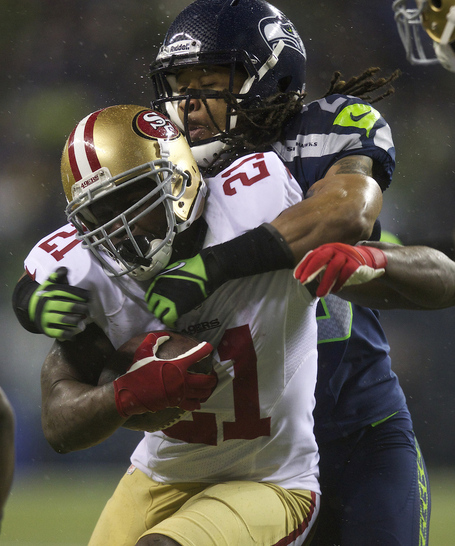 RUNNING Out of Gas?

For the second straight week, San Francisco's ground attack has failed to gain traction. It's all the more disconcerting when you consider how crucial the running game was to the overall success of the team last season.

So far this year, in two games, Frank Gore has carried the ball 30 times for a total of 60 yards - an average of 2 yards per carry. That's...abysmal. And Frank knows it.

Mindi Bach of Comcast Sportsnet Bay Area, along with a few other reporters, approached Gore by his locker after Sunday night's game.

"Not the way the 49ers wanted to return to Seattle," Bach starts. "If you had to point to what the biggest problem was with this team tonight, what was it?"

Gore was never the most eloquent speaker, but as he stumbled over his words, shook his head, and looked around the room, it was clear he was both frustrated and perplexed.

"We just couldn't get nothing going," Gore responds, still searching for answers. "Seattle played a great game. They beat us tonight."

In two games, Frank Gore has carried the ball 30 times for a total of 60 yards - an average of 2 yards per carry.

Bach was more direct in her followup. "Why was it so hard to establish the run?" she asks.

"We got to look at the film and see," Gore says, letting out a sigh and shaking his head once more. "We just got to watch the film."

"How frustrating is it for you?" asks another reporter.

"Man, I'm alright. I'm alright," Gore responds. He repeats once more, "I'm cool, I'm alright." And from there, he decides the interview is over, cuts off a reporter, and leaves his locker waving off microphones.

Simply put, if San Francisco wants any hope of returning to the Super Bowl this year - or hell, returning to the playoffs at all - the issues in the running game must be corrected. And soon.

Everyone's got a Kryptonite. For the San Francisco 49ers, it's Seahawks running back Marshawn Lynch.

Lynch boasts three consecutive 100+ yard running games against the Niners dating back to December of 2011. Over the last few years, San Francisco's defense has established a reputation for being notoriously stingy against the run. But for whatever reason, Lynch always seems to have their number. 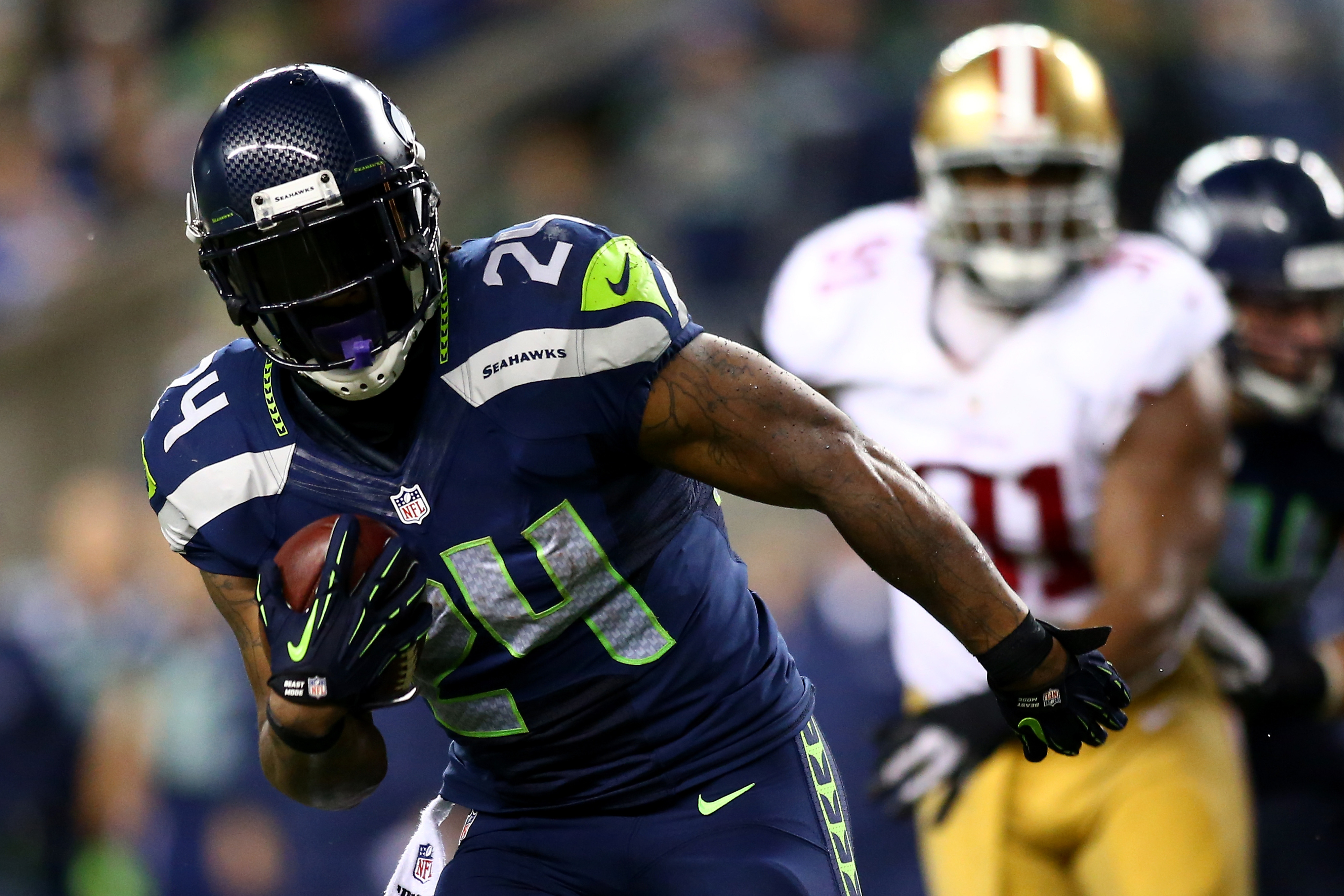 (Jonathan Ferrey/Getty Images)
"To face him two times a year, it's a task. It's a challenge. He's a heck of a runner." - Patrick Willis, on Marshawn Lynch

The first half of the game on Sunday night was a defensive stalemate for the most part, but it was Lynch who would draw first blood, scoring the game's first touchdown in the third quarter to put the Seahawks up 12-0. Then at the start of the fourth quarter, it was Lynch again who made a red zone reception before taking his sweet old time and literally walking into the end zone for another score.

Lynch finished the day with 98 rushing yards and three touchdowns. And while he was two yards short of his fourth consecutive game over the century mark against the Niners, he still dealt plenty of damage.

"Marshawn is one of the better backs in the league, and to face him two times a year, it's a task. It's a challenge," says Patrick Willis. "My hat goes off to him. He's a heck of a runner."

Quarterback Russell Wilson didn't fare much better than Kaepernick through the air, but on the ground, in tandem with Lynch, Wilson was a handful.

"Along with having a quarterback like [Wilson], who you have to respect at the same time, because at any given time, he can get the ball and be going too," says Willis. "It presents a challenge, but we take nothing away from them. They did what they had to do tonight to win this game, but I look forward to the next time we play them. The rematch will be there." 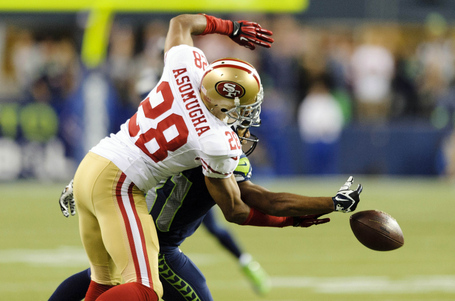 Penalties AND turnovers AND injuries, oh my!

Sunday night was disastrous for so many reasons, but perhaps the most frustrating thing above all else were the penalties. It seemed like flags were flying in from all directions the entire game, the majority of which were against San Francisco.

Perfect games are a rarity in that penalties are almost inevitable. It's only a matter of time until an offensive lineman gets called for the occasional hold or false start. But the most egregious penalties levied against the Niners on Sunday night were ones entirely avoidable and unnecessary.

Three unsportsmanlike conduct penalties are three too many. And they all occurred during the second half of the game even when the game was still relatively within reach for the Niners. In total, San Francisco was penalized 12 times for 121 yards. That's 58% of their entire offensive production. Inexcusable.

Combine the offensive ineptitude, complete lack of discipline, and five total turnovers, and it quickly becomes apparent why the Niners were only able to manage one field goal the entire night.

How does a game go from bad to worse, you ask?

In total, San Francisco was penalized 12 times for 121 yards. That's 58% of their entire offensive production.

Four Niners exited the game as a result of an injury. Nose tackle Ian Williams sustained a broken ankle and will reportedly undergo season-ending surgery. Sensational rookie free safety Eric Reid suffered a concussion making a tackle on receiver Sidney Rice. Tight end Vernon Davis left later in the game due to a hamstring issue, and as of Tuesday morning, his status is still unclear. Defensive end Ray McDonald also left the game due to an ankle injury though it doesn't appear to be as serious as Williams'.

Injuries are unpredictable and uncontrollable. Making the conscious decision to slap an opposing player across the helmet, on the other hand, is controllable.

"Any time you get a lot of penalties, one after another, it could cost you the game," admits Davis. "We have to really think about those things next game and get it corrected. It could cost us the game and possibly cost us the season."

"But we're not going to allow that to happen. We're better than that," says Davis. "It was just a game where we just acted instead of thinking, so we have to think first and then act. And we know that."

Let this be clear: it is entirely too early to hit the panic button. With that said, Sunday night's performance was certainly eye-opening. The sky isn't falling just yet, but we know now that the San Francisco 49ers are far from invincible. There is plenty of room for improvement.

Let's hope so. Otherwise, it's going to be a long season.