Fantasy football 2013 update: A look at Niners Nation League No. 1

Share All sharing options for: Fantasy football 2013 update: A look at Niners Nation League No. 1

We're two weeks into the season, and now seemed as good a time as any for an update on the Niners Nation fantasy leagues. If you are in one of the leagues, feel free to update us on your league standings. If you feel like talking a bunch of smack about your league, feel free.

My own team is hanging in there at 2-0 thanks to a solid start to the season from Tony Romo and LeSean McCoy. I've got a pretty solid roster, but that leaves me with some questions each week. I have Vernon Davis starting for me, and Week 1 was a big return. He struggled in Week 2, as he just couldn't get anything going. 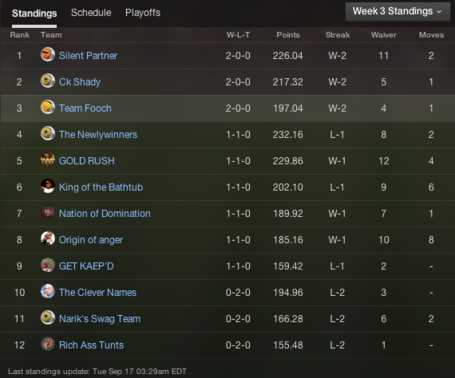 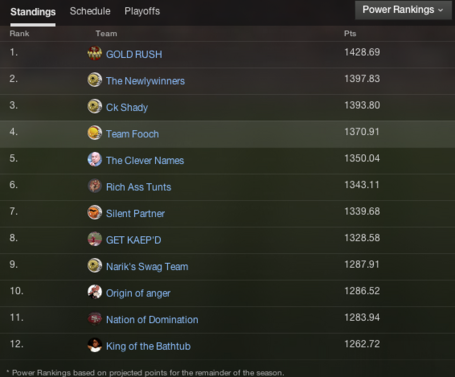 How are your fantasy teams doing? I started strong Week 1 in my paid leagues, but Week 2 was not pretty. Let's hope for a bounce-back!

Speaking of fantasy football, if you have any questions to improve your team, drop by the SB Nation Fantasy War Room. It runs Monday through Friday 4-8:30 p.m. and Sunday 8 a.m. to 1 p.m.