Someone wrote a letter to the editor complaining about the noise at CenturyLink Field during Sunday's 49ers-Seahawks game. We are amused by this. New to Niners Nation? Sign up here and join the discussion!

Share All sharing options for: Two 49ers football watchers are not pleased with the fan noise at CenturyLink Field

If there was ever a reason to refer to the 49ers as the 40-whiners, this might be it. Two days after the 49ers 29-3 loss to the Seattle Seahawks, someone sent a letter into the San Francisco Chronicle to complain about the noise at CenturyLink Field. The folks at the Seahawks sub-Reddit grabbed this screenshot. 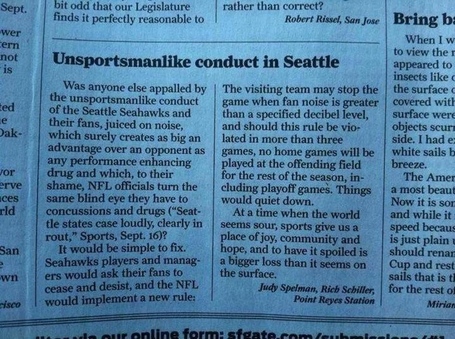 As I understand it, the media up in Seattle is having a field day with this, and I'm sure it has been read over and over again on Seattle sports talk radio. And honestly, I wouldn't blame them for running with this.

This is a pretty whiny letter, although a friend of mine told me that Point Reyes Station is one of the quietest places they've ever been. I suppose that might explain some of this. That being said, I love the suggestion that the players and "managers" ask the fans to "cease and desist." I'm sure the NFL will jump right on removing home games for a team that violates this rule.

And in case you're wondering, somebody actually agreed with them on this.

It wasn't a game of skill anymore; it was an exhibition of excessive stadium noise, posturing obscenities in your opponent's face to draw a foul and street-punk behavior to fire up tensions to gain any advantage to get the win.

In regards to "posturing obscenities in your opponent's face to draw a foul and street-punk behavior to fire up tensions", I'm guessing they have never been to a game at Candlestick Park.

Seahawks fans will have fun with this, and I don't blame them. This is a ridiculous letter. Deadspin suggested it is entirely possible it is satire, but chooses not to believe it. And neither do I. I suppose one could complain about piped in noise, but even if the Seahawks do pipe in noise, you know they can't be the only ones.

Sometimes people are just begging to be mocked.