LaMichael James is ready to play

49ers running back LaMichael James had an interesting comment on Twitter. We take a look at what it means. New to Niners Nation? Sign up here and join the discussion!

Share All sharing options for: LaMichael James is ready to play

The San Francisco 49ers have serious issues on offense right now. I don't know if one player can make a difference, but we know one player wants to get back in the game. LaMichael James had this tweet a few minutes ago: 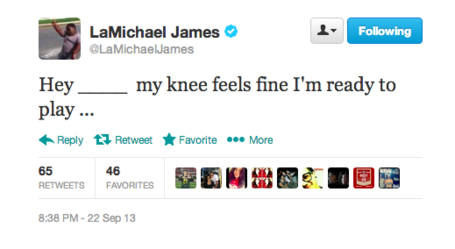 I'd like to hope this was in response to fans constantly asking him how he's doing. On the other hand, it could very well be directed at Jim Harbaugh, Greg Roman or who knows who else. Given how things have been stumbling along this season, it could mean all sorts of things, some of which are not positive.

We already heard earlier today that Frank Gore had some words for Jim Harbaugh at the end of the 49ers loss on Sunday. I don't think anybody can be surprised by Frank Gore being disappointed with his second half touches. The 49ers were dominating on the ground, and went away from it to some extent. This is being read into by some as a sign of losing the team, but I think that's getting a little ahead of ourselves for now.

The 49ers had James back at practice this week in a limited fashion. WIth a short week ahead of them, can they get him back in time for the game? Can James' athleticism make a difference? He had some big moments last season, but his preseason was inconsistent at times. Will it improve the stagnant offense?