The Booth Review - 49ers vs. Colts

"There's no time for excuses. We'll see what we're made of."

Welcome back to The Booth Review. It was a reunion of sorts on Sunday when Andrew Luck and the Indianapolis Colts came to town but not a happy one for Jim Harbaugh and the San Francisco 49ers. What did we learn?

Before Sunday, Jim Harbaugh had never suffered consecutive losses since becoming the head coach of the San Francisco 49ers. His squad returned home after a humiliating defeat by the Seattle Seahawks the week prior - a tough divisional rival at the insufferable CenturyLink Field. Players and coaches vowed to 'learn from mistakes' and 'get better'.

BACK ON THE GRIND

In the first two games of the season, San Francisco's running attack could only be described as 'anemic'. Frank Gore and company barely had a pulse and simply could not get anything going on the ground. Against Indianapolis, it was a different story.

Even if it was just for a day, Gore was cracking off runs like it was 2006. On San Francisco's second offensive drive, Gore recorded two runs over 20 yards, the second of which was an absolute beauty in design and execution featuring exceptional blocks by guard Mike Iupati and tight end Vance McDonald. Two plays later, backup Kendall Hunter took a delayed handoff and ran through a wide-open lane, untouched, into the end zone for the score. The drive exemplified everything a functional running game should be.

At halftime, Frank Gore and Kendall Hunter accounted for 11 carries for 88 yards and a touchdown. They had four carries the rest of the game.

It was perhaps the only silver lining of the day, and while not a failure in itself, it was a failure in that it was all but abandoned in the second half.

"We tried to continue to stay balanced after that drive," said Harbaugh after the game.

Well, no, you really didn't.

At halftime, Gore and Hunter accounted for 11 carries for 88 yards and a touchdown. Between both of them, they had four carries the rest of the game. The numbers speak for themselves. For the first time all season, the running game finally caught fire, and Greg Roman licked his fingers and pressed the wick of the candle.

Why? I can't even begin to make sense of it. 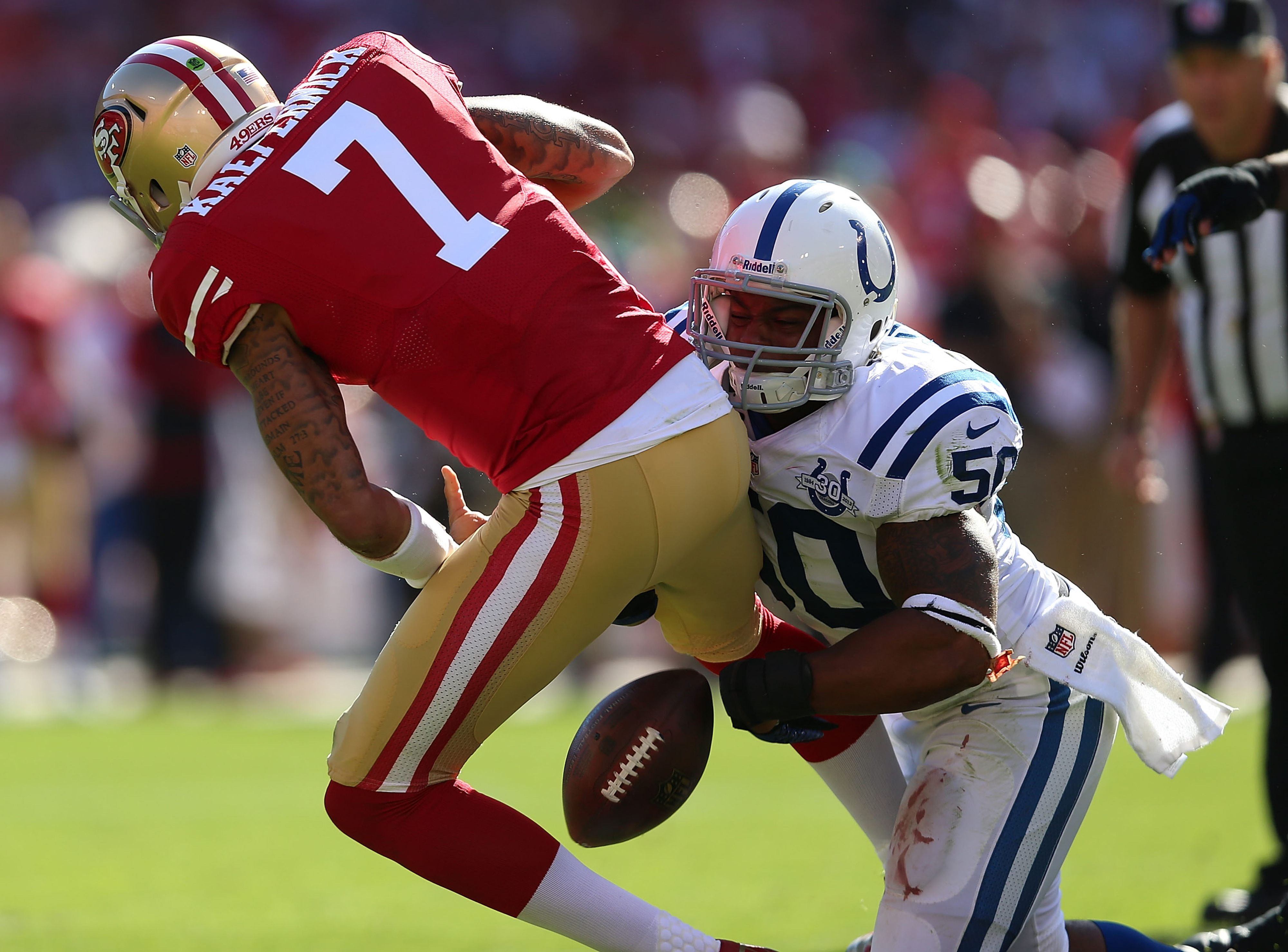 CAUGHT IN A JAM

The only other wide receiver to make a catch [besides Anquan Boldin] was Kyle Williams who had two for 12 yards.

The decision to abandon the run is all the more vexing considering the continued struggles in the passing game.

With tight end Vernon Davis out with a hamstring injury, Anquan Boldin was the only viable receiving option. Boldin, who finished the day with five receptions for 67 yards, is phenomenal at best and serviceable at worst, but he can't do it all himself. Somebody needs to step up behind him.

The most effective passing plays all day were underneath throws to backs Gore, Hunter, and Bruce Miller or short passes to tight ends McDonald and Garrett Celek. The only other wide receiver to make a catch was Kyle Williams who had two for 12 yards. The receivers are struggling to get open on one-on-one matchups, and when they actually break free, they're dropping the passes outright.

In the first quarter, San Francisco faced a pivotal third down at Indianapolis' 44-yard line. Colin Kaepernick had Williams wide open by the left sideline. Kap hit Williams right in the mitts, and had he caught it, the Niners would have received a fresh set of downs. Instead, the ball glances right off his hands, and they were forced to punt. San Francisco wouldn't cross midfield again until about three minutes left in the third quarter.

While there are obvious problems in the receiving corps, Kap is not completely absolved of blame. Last year, he was one of the league's most explosive offensive players. Over the last two weeks, he has been rendered almost completely ineffective. He's staring down his first options, under-throwing, over-throwing, forcing the ball...

Kaepernick isn't perfect, but if he can get somebody...anybody...not named 'Anquan Boldin' to step up, he doesn't need to be. The talent is there, but it's going to take a concerted effort to get this offense back on track.

"Everybody's got a part in it. It's not just one person," said left tackle Joe Staley. "These last two weeks have been crap."

You said it, Joe. 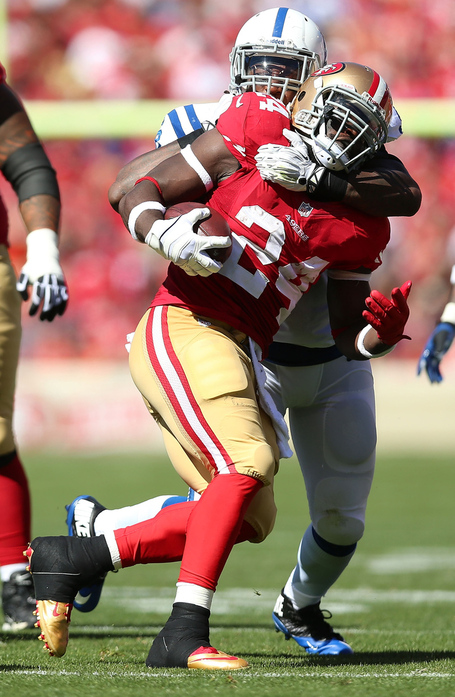 Penalties continue to be the elephant in the room for San Francisco. I hadn't addressed the issue at length after the first two games, but at this point, it can no longer be ignored.

Through three weeks of play, the Niners are the second-most penalized team in the league, behind only the New York Jets, drawing a total of 29 flags for 254 yards. And they always seem to come at the worst times.

Take, for instance, the Colts' opening drive of the game. Andrew Luck and the Indianapolis offense started at their own 20-yard line.

Four plays and a blink of an eye later, Trent Richardson knifes through the middle of the Niners defense and into the end zone. Just 3 minutes and 40 seconds into the game, San Francisco trailed by a touchdown.

Here's another one for you.

It seems like even when the Niners have the smallest, slimmest glimmer of hope at mounting a comeback, they shoot themselves in the foot with a senseless penalty.

Early in the second quarter, the Colts had the ball on 3rd-and-3 at San Francisco's 28-yard line. The pass was incomplete to Reggie Wayne, but once again, a defensive pass interference penalty is called against Brown. The Colts were awarded an automatic first down. Sure, the defense was able to hold them to just a field goal, but those were three more opportunities for Indianapolis to get something more out of the drive.

Despite playing miserably, the Niners were still just one possession behind at the beginning of the fourth quarter. Again, the Colts started at their own 20-yard line. But yet another defensive pass interference penalty on Brown along with a defensive holding penalty gave Indianapolis two free first downs en route to the end zone to put the game away for good. Not only did Indy increase their lead to two possessions, they also drained seven precious minutes off the clock in the process.

However poorly a team may play, matters are only made exponentially worse when they pile on the penalties. It seems like even when the Niners have the smallest, slimmest glimmer of hope at mounting a comeback, they shoot themselves in the foot with a senseless penalty. It's entirely too frustrating for me, and I'm merely a spectator. I can only imagine how discouraging it is for a defensive player to make that all-important third-down stop only to see a yellow flag on the field. 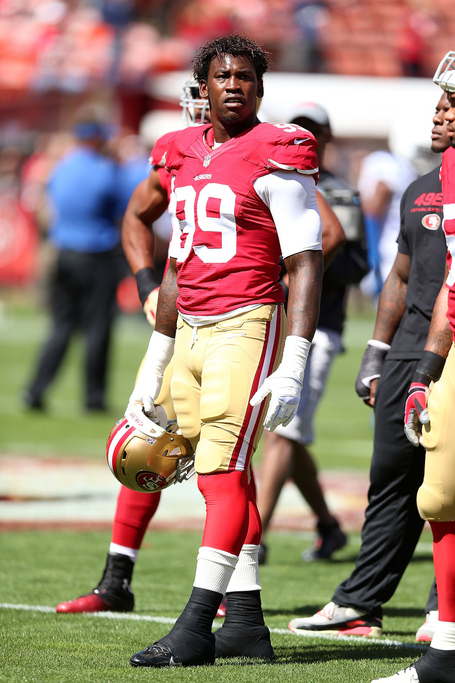 A DIFFERENT KIND OF 'STUPID'

On the morning of Friday, September 20, linebacker Aldon Smith was arrested on suspicion of driving under the influence after crashing his truck into a tree. His blood-alcohol content was 0.15, twice that of the legal limit in the state of California. Police also reportedly found marijuana and pills in Smith's vehicle.

On Sunday evening, after the game against the Colts, Smith's locker was found to be completely empty. It was later revealed that he would be taking an 'indefinite' leave of absence from the team to undergo rehabilitation.

There has already been plenty of discussion here at Niners Nation since news broke on Friday, so I won't stand on the soapbox for too long, but I did want to say my piece.

Like Aldon Smith, I am a 23-year-old adult male. Like Aldon Smith, I've made my fair share of stupid decisions, even within the past year. But his actions over the weekend are an entirely different kind of 'stupid'. They're reprehensible.

Nobody is telling Smith that he can't go out to the bar with his friends, enjoy a round of beers, and watch Thursday Night Football. He could do so, and nobody would bat a lash. But to get so intoxicated and/or high that you're crashing your car...into a tree?

"It's all good when you're winning football games two years in a row. But a little adversity hit, so we'll see what we're made of." - Donte Whitner

Aldon better thank his stars that it didn't end up worse. What if a woman happened to be walking her dog that morning just as he lost control of the wheel? A mother of three, perhaps? What kind of headlines would we be reading then? A month in rehab is a slap on the wrist, and quite frankly, I wouldn't lose sleep if his stay was even longer if it meant he'll wise up from it. Consider his past offenses, including an alleged shooting that occurred at a party in his home and another drinking-and-driving incident from January of 2012, and it's pretty obvious that Aldon has a lot of growing up to do.

I love the sport of football. I love watching it and writing about it - enough to want to make a career out of it some day. But at the end of day, it's just football. And it could never, ever amount to even an iota of the importance of a human life.

Ironically enough, Smith's recent peril serves as a perfect allegory in describing the state of the San Francisco 49ers at this juncture.

"There's no time for excuses. It's all good when you're winning football games two years in a row," said safety Donte Whitner. "But a little adversity hit, so we'll see what we're made of. I know the guys in this locker room, the character of the guys.

"I know that we'll bounce back. We'll be okay."

For the Niners, and maybe especially for Aldon Smith, now is the time to dig deep within themselves, do a little soul-searching, figure out who they really are, and find out who they want to be.