Colin Kaepernick drinks in the haterade

49ers quarterback Colin Kaepernick apparently keeps track of some of the people providing mindless critiques. We'll see how he uses this motivation. New to Niners Nation? Sign up here and join the discussion!

Share All sharing options for: Colin Kaepernick drinks in the haterade

One of the best and worst things about Twitter is the ability of fans to interact, or at least attempt to interact with professional athletes. It's great when athletes are responding and conversing with their fans. Of course, this also means they have to deal with some of the more obnoxious people of the world. You just have to accept the bad with the good.

Colin Kaepernick has gotten his fair share of nasty comments the last couple weeks, and it appears the 49ers quarterback is using them as added motivation. For those not aware, on Twitter, you can "favorite" a comment. People sometimes favorite stuff they like, but they frequently favorite stuff they want to check out at some later point. Kap went through and favorite'd several of the scathing comments coming his way. 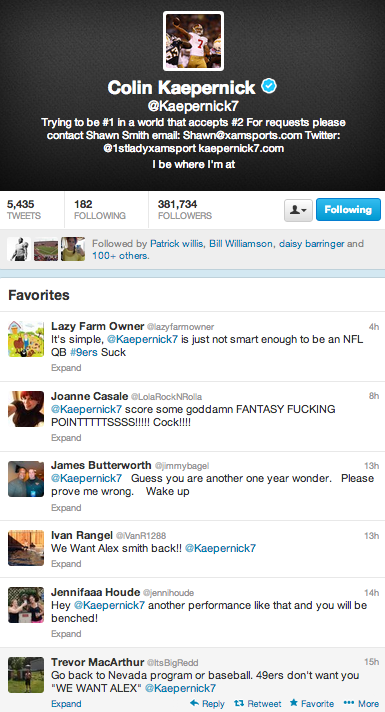 The 49ers need more than just motivation for their franchise quarterback, but the fire is still welcome. We'll see if he can turn it into production this Thursday against the Rams.