49ers safety Donte Whitner was flagged for an illegal hit on Sunday against the Indianapolis Colts. It turns out he should not have been flagged on the play. New to Niners Nation? Sign up here and join the discussion!

Share All sharing options for: Donte Whitner told he should not have been penalized for hit on Ahmad Bradshaw

On the 49ers first defensive play of the game, safety Donte Whitner was flagged for a personal foul. He got a big hit on Ahmad Bradshaw, and the refs called unnecessary roughness because they felt he made illegal contact with the crown of the helmet.

Most of us called BS when we saw the replay, and the NFL agrees. According to Whitner, the NFL told the 49ers on Monday that the hit should not have been penalized, and Whitner would not be fined.

Unfortunately, with things happening in real time, and the league trying to crack down on illegal hits, it seems likely that officials are going to make mistakes on some of these hits. Whitner's hit occurred right in front of the official. 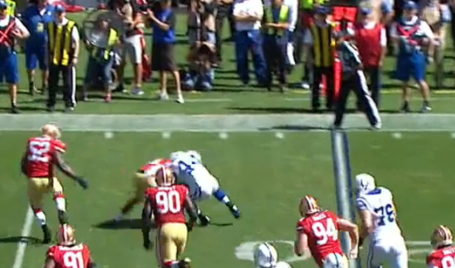 In looking at this screen shot, I'm not surprised the official would think he is seeing an illegal crown hit. If he was parallel to the play he might have seen it, but I think his role requires him staying right on the line of scrimmage. I'm not positive, but I think that's his spot.

From the other side, here is the hit: 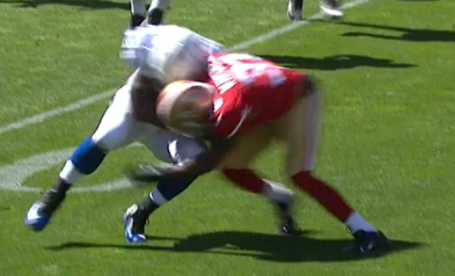 It's incredibly obvious from this, but obviously: a) refs don't get to slow it down and b) the ref was more on Bradshaw's right shoulder side, so it's not a surprise he might miss it.

The 49ers have struggle mightily with penalties, ranking second to last in penalties per game. It cost the 49ers significantly on Sunday as there were several penalties (I counted at least four) that gave the Colts a new set of downs. The first two were back-to-back on the opening drive, including this one and a defensive pass interference call on Tarell Brown. The 49ers defensive backs were not happy with some of the calls being made against them, but they need to figure out a way to work around this kind of thing.