Taking a look at the 49ers offensive struggles against the Colts using the coaches' film.

Share All sharing options for: 49ers vs. Colts All-22 analysis: Offensive woes examined

It's no secret that the 49ers offense struggled against the visiting Indianapolis Colts during their week three match-up. The biggest question on most fans' minds is: Why?

Thanks to the coaches' angles via NFL Rewind, we have some clues to the mystery. Were the receivers not getting open vs. man coverage? Was Colin Kaepernick simply failing to pull the trigger, or not seeing guys? What was up with some of those failed run plays?

To start let's take a look at one of the first passing plays of the game. This picture was captured around three seconds after the snap, generally when you'd like to see the ball come out. As you can see, nobody is even remotely open. A throw here is essentially gambling.

The coverage was tight most of the game, but I'll hesitate to say there weren't ever guys open. We'll see more passing plays as we go, but here's a run play that wasn't so successful. Anthony Davis doesn't even slow his man down on this play, and it's easy to see why Kendall Hunter had no chance. This is the pitch one-way, cut-back-the-other-way run that got stuffed. 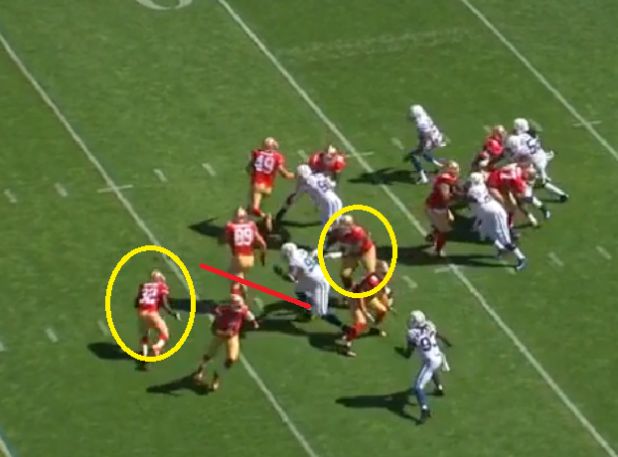 On Hunter's touchdown, the draw play, the blocking was much better. You can see the giant lane created by the pass rush. This is why I love draw plays. 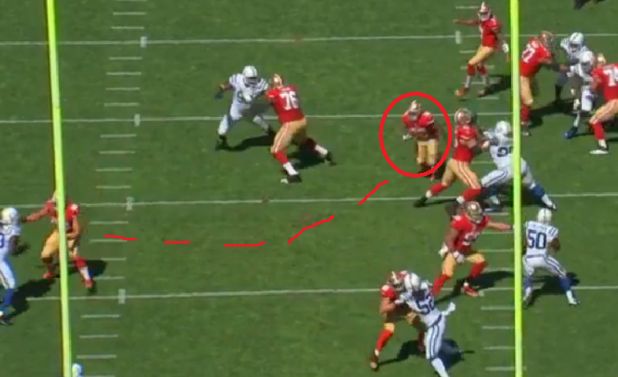 Here we have a play with a receiver who's breaking open. Kyle Williams was running a stop route that sorta turned into an out route. There's pressure coming in Kap's face, and again, this is right at about three seconds, but had he stood in there and thrown this ball, Williams had room. It's a two-part image. the first is when the ball needed to come out. The second is where Williams would have been when the ball got there, had it been thrown.

Here's a play where Kap decided to scramble instead of throwing the ball. You can see he has time to throw the underneath routes here, but he was skittish all game. 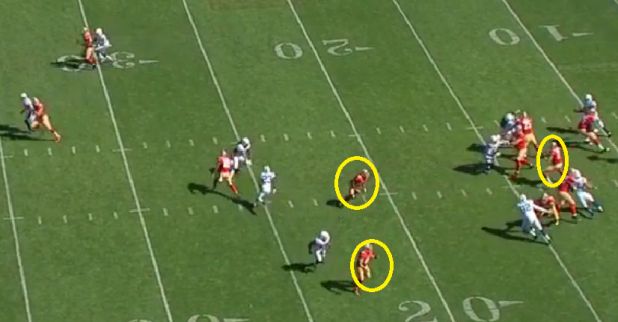 On that weird Anthony Dixon chest-pass pitch that went nowhere, well HERE'S your problem...Garrett Celek completely whiffs on the block and Dixon is met in the backfield, forcing him to try to break a tackle while other defenders converge.

Now, Kap wasn't all to blame for the passing game woes. Here's a play where, at three seconds, nobody is open whatsoever and the pass-rush is right in his face. This resulted in a quick sack. 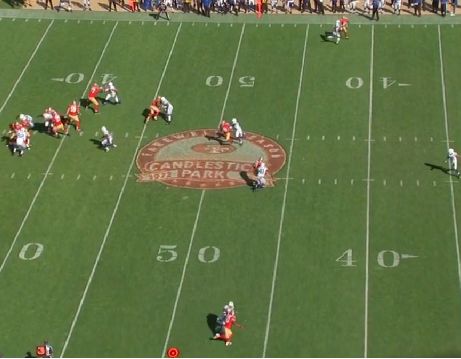 I have a bunch of other screen-grabs from the All-22 film that you can see at this link here.

Overall the blame for the offensive woes was pretty evenly spread. The receivers had some trouble with man coverage, but there were also times where guys were open and Kap simply didn't see them, or threw to another read that was more covered or a shorter pass. It's kinda chicken-egg whether or not the receivers not getting open caused him to stop looking around, or if he just never was comfortable.

Jonathan Goodwin did not have a good game, nor did Celek, in terms of blocking on running plays. Still, there were plenty of successful runs, even into the third quarter, yet Greg Roman seemed to get a heightened sense of urgency and began eschewing the ground game even though the points deficit was still very manageable.

Everyone mentioned here was to blame, and must improve. The word "precision" being tossed around a lot this week makes perfect sense. Little things led to disaster during this game. The 49ers need to clean those little things up, before they turn into huge problems.