A breakdown of the All-22 footage illustrating how Kaepernick's indecisiveness was the primary reason behind the 49ers poor offensive showing against the Colts.

Share All sharing options for: All 22 Footage: Colin Kaepernick's Indecisiveness

Quick Intro: As a life long 49ers fan and overall football junkie, I spent countless hours of my life trying to figure what made certain plays and techniques successful. Unsatisfied with other people's options, I craved the opportunity to dissect the games and make my own judgements. When the NFL made the All-22 footage available, I jumped on the opportunity to break down film and discover what actually happens on Sundays. Now I will bring my analysis to Niners Nation by breaking down a few plays from every 49ers game with the goal to illustrate why the 49ers won or lost.

After Sunday's home loss to the Colts, there were plenty of negatives to dissect. Despite errors in every facet of the game, the most disturbing aspect of Sunday's game was how poorly Colin Kaepernick played. Using GIFs and screenshots of the All-22 film, I will break down exactly what went wrong for Kaepernick and ultimately the 49ers offense.

Panic in the Pocket: After the Week 1 victory against the Packers, Kaepernick looked the part of an elite quarterback. He displayed the calm decisiveness in the pocket that was the perfect complement to his incredible athletic ability. In the two games since, he has looked everything but composed in the pocket. It started in Seattle, where he had his worst passing day as a QB in the NFL. This was understandable given their elite defense and home crowd, but after the Colts game his lackluster play in the pocket is starting to seem more like a trend then isolated events. Too often, Kaepernick looks flustered and is stuck deciding whether to scramble or pass, frequently missing both open receivers and running lanes in the process. Just look at these two plays from Sunday. 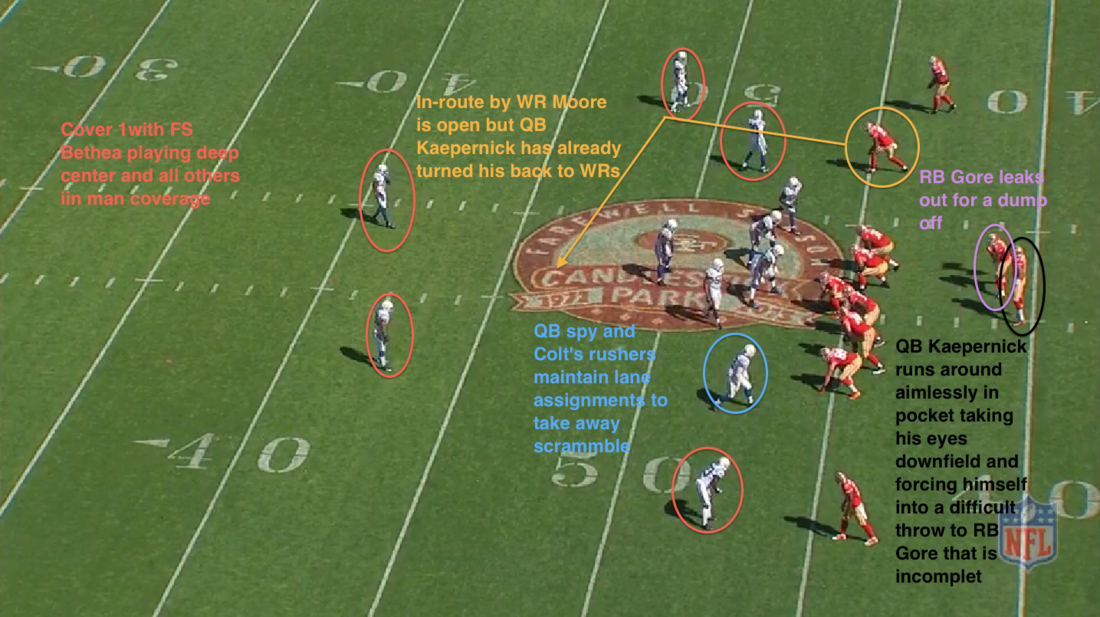 Pre-Snap: The 49ers are in their 11 personnel with WR Boldin out wide right, WR Moore in the slot to the right, WR Williams out wide left, TE McDonald inline to the left and QB Kaepernick in the shotgun with RB Gore to his right. The Colts respond with their nickel package with a single high safety in Cover 1 with a QB spy.

Post-Snap: The 49ers send all three WRs and McDonald on downfield routes leaving Gore to block against a five-man rush with a QB spy. The offensive line provides solid protection with RT Davis pushing DE Mathis past the pocket and the interior offensive linemen keeping the DTs from collapsing the pocket.

To start the play, Kaepernick is looking to his right at both Boldin's deep fade and Moore's 10 yard in-route. Before Moore can break inwards, which created enough separation for an easy first down, Kaepernick switches to his second read, McDonald's corner route. McDonald is completely covered and Kaepernick begins to panic. He takes a step forward only to turn his back to the defense and scramble backwards 6 yards.

Kaepernick tries to reset and focus downfield but the combination of changing his release point and the amount of time that had elapsed since the snap allows the pass rush to flush him out of the pocket. Kaepernick again turns his back and retreats farther downfield, eventually getting a full 15 yards behind the line of scrimmage. The play ends as Kaepernick throws low to Gore, who had leaked out on a check down, under pressure for an incompletion and fourth down.

Summary: This was bad. Really bad. Despite the 49ers coaching staff designing a play that would allow their slow WRs to get open, the pseudo stacked formation allowed Moore to gain a step across the middle; Kaepernick rushed his progressions and did not allow time for the route to develop. Instead he panicked and scrambled backwards in the pocket while looking a little like a chicken with its head cut off (or Blaine Gabbert) . There were options for Kaepernick, but he simply did not have the poise to wait in the pocket for routes to develop and take advantage of the one on one coverage across the field.

Pre-Snap: The 49ers are in the 21 personnel with WR Williams out wide left, WR Bolding spilt out to the right, TE McDonald motioned out behind WR Boldin and QB Kaepernick in the Pistol with FB Miller to his left and RB Gore behind him. The Colts are in their base 3-4 defense with a single high safety playing Cover 1. 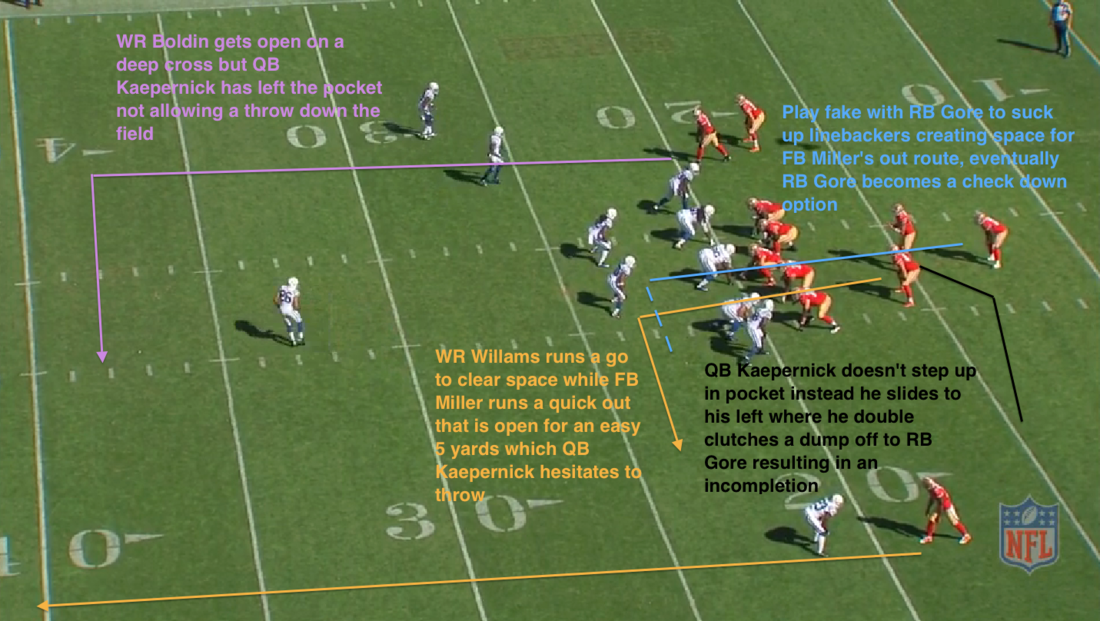 Post-Snap: A quick play fake by Kaepernick fails to get the ILBs to bite. Williams runs a go route to clear out the left side for Miller's quick out route. Despite the ILB not biting on the play fake, Miller still gains a step of separation or at least inside position on his defender. The entire time Kaepernick is locked onto Miller, who is clearly the first and realistically only read on the play, but decides not to release the football. Instead he drifts to his left allowing the pass rush time and a better angle to get to him. Now under pressure, he scrambles left looking at Gore who leaked out as a check down option. Gore is open but Kaepernick double clutches his throw resulting in a throw that lands at Gores feet.

Summary: Again, indecisiveness by Kaepernick dooms this play. His first option was open, yet he refused to take an easy 5 yards. At this point in the game, after several plays were similarly plagued with indecision, the 49ers fans and most likely the 49ers coaching staff would have preferred any decisive action by Kaepernick. Any decision, even the wrong decision, such as scrambling left on this play, would have been a welcome change. The final throw epitomized Kaepernick's day, one where even the simplest play, like a routine check down, seemed to overwhelm him.

Missed throws: Starting with the very first throw of the game, an incomplete pass to an open Kyle Williams, Kaepernick looked uncharacteristically inaccurate. His panic in the pocket is partially attributable to his poor throws as because it altered his timing and balance, but even when he dropped back cleanly and made decisive decisions his passes were off target. Look at this miss opportunity to Celek down the seam.

Pre-Snap: The 49ers are the in their 22 personnel with WR Boldin out wide right, FB Miller motion to the right slot, TEs Celek and McDonald inline right with RB Gore in the backfield. The Colts are in their 3-4 base defense playing Cover 3 defense. 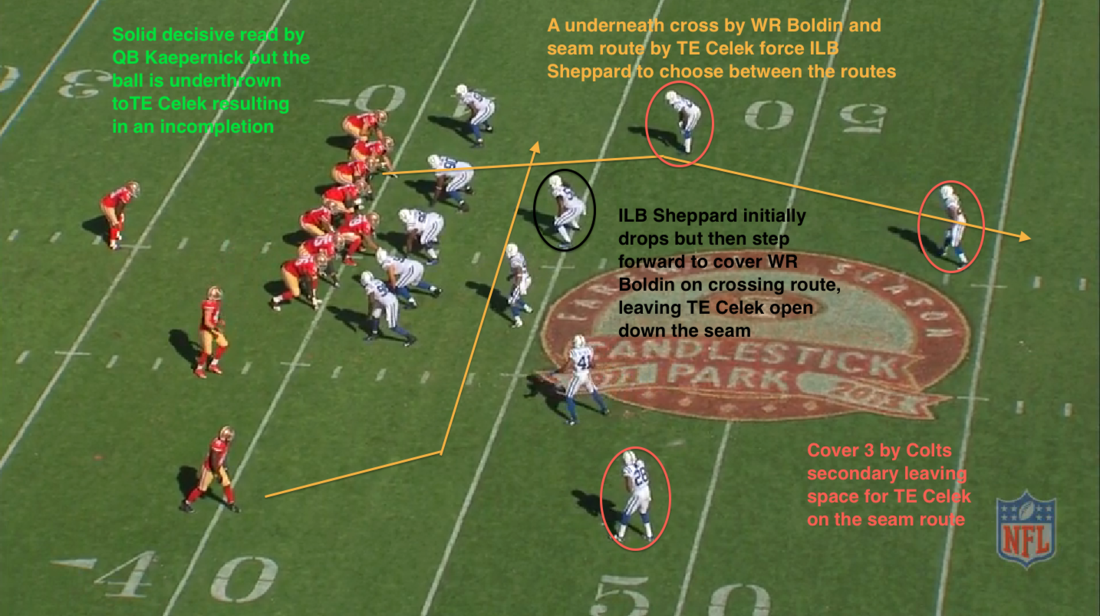 Post-Snap: All five 49ers run routes but the only two that are truly important are the seam route by Celek and the crossing route by Boldin. The read is to throw to whomever ILB Sheppard, responsible for the underneath middle zone, does not cover. Sheppard initially drops to cover Celek's seam route but then steps up to take away Boldin's crossing route. By doing this Sheppard allows Celek to get open in the space between SS Brown and himself. Kaepernick makes the correct read but the throw is low and slightly outside giving Celek a slim chance of making the play.

Summary: On this play, the 49ers are running a variation of ‘Texas', a scheme created by Mike Holmgren to attack the Tampa 2 defenses of the late 90s/early 2000s. The goal is to force the middle linebacker, who is responsible for a middle zone, to choose between the crossing route underneath him and the seam route behind him leaving one of the options open. While the Colts aren't play Tampa 2, their Cover 3 coverage has similar weaknesses.

This gorgeous play at the perfect time was meant to capitalize on the momentum following the missed FG by the Colts the play before. Instead Kaepernick, who makes the right decision on this play, underthrows an open receiver. 49ers fans will say that if TE Davis was healthy and in the game it would have been a big gain and they are probably right, but there is no excuse for QB Kaepernick not to complete this pass.

Conclusion: Former quarterbacks will tell you that confidence is essential to success at the quarterback position. On Sunday, Kaepernick looked lost, confused and flustered; all tell tale signs of lost confidence. The most evident sign was his indecisiveness to tuck the ball and take off up field when running lanes open in front of him.

Luckily for 49ers fans, Kaepernick seems to be handling this slump in the best of ways, using it as motivation to get better. His actions this week, whether it was his words to the media or favoriting tweets of his followers' criticism, all show his dedication to improve. Despite the real issues that hamper the offense, namely the lack of playmakers at the wide receiver position and the inconsistent running game, the 49ers will bounce back offensively this year. Simply put, Harbaugh and Co. are too talented, intelligent and determined to let this offensive slump continue.