All-22: Just Run the Dang Thing

We take a look at the All-22 coaches film of Frank Gore's success on the ground early against the Indianapolis Colts.

Share All sharing options for: All-22: Just Run the Dang Thing

The San Francisco run game had its best outing of the year in one drive of one quarter against the Indianapolis Colts. Favonian in its execution and outcome, the 49ers ground game looked its old self for a solid 4 minutes on Sunday.  Then the coaches stopped trying.

So let's see what they did so well for those glorious 4 minutes and hope Jim Harbaugh and Greg Roman return to it tonight.  After all, the run game will be needed more than ever in a tough road match against a St. Louis squad that played us well last year to the tune of 1 1/2 defeats.

This is not a gimme win on Sundays at home, let alone on the road on Thursday with the San Francisco offense in the midst of a dreadful skid.

I don't care what anyone says, the 49ers' o-line is full of tough SOB's.  Just follow Anthony Davis on Twitter or attend the next Alex Boone press conference to see that in action off the field.

On the field, the 49ers employ more than their share of whams, pulls, traps, and the like to gain any edge they can over the defensive front -- but none of that can be effective in the NFL if your line can't back it up by occassionally mauling a guy one-on-one.

The Seattle defensive front is no push-over, but the Indy squad presented an easier task.  When I wrote about moving on from the Seattle loss and preparing for the Colts, I assured myself the 49ers would get back to what made them successful: the ground game.

The first two drives showcased exactly that.  I won't provide a story here, because Anthony Ly already did a fine job of that two days ago in this great Booth Review post on the Niners having "no excuses" moving forward.

What I will do instead is provide some film for the purpose of re-assuring myself (and you) that this team can get back to winning if it gets back to running. 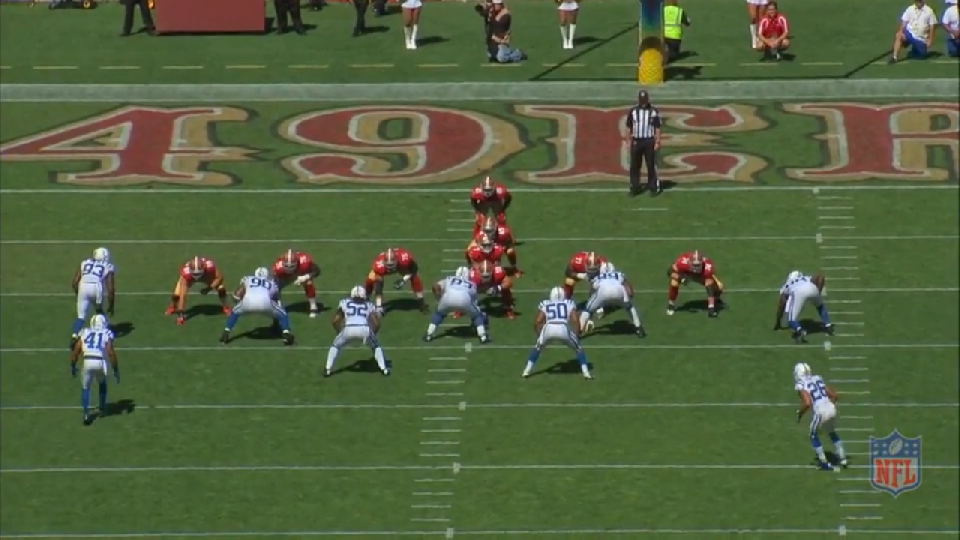 We start with the first drive of the game, which ended in a 3-and-out.  The 49ers would have 5 of those on the day.

Before the season started, I mused a bit about the correlation between 3-and-outs and point differential because the Colin Kaepernick offense was more boom-and-bust last year and, so it seemed, this was causing defensive performance to suffer.

The research for that led to this chart, organized from least to most 3-and-outs per game last year (external link for bigger, sortable version):

The thing to look for here is the offense in last place: the Arizona Cardinals with five 3-and-outs per game last season.

On Sunday, the 49ers were that bad. 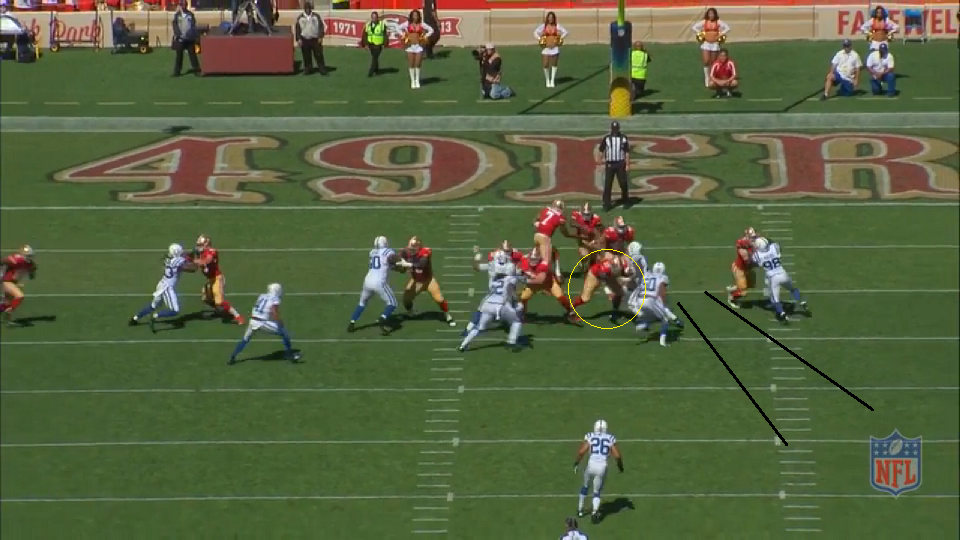 But the run game started off strong.  Here Kaepernick is handing the ball off to Gore.  The play is supposed to go through the hole indicated above (black lines), but Mike Iupati (yellow circle) loses his footing. 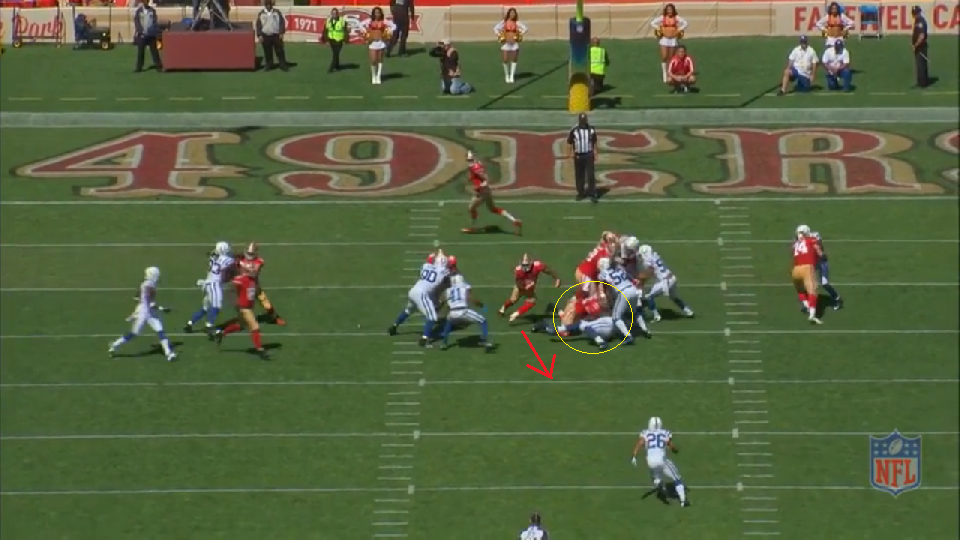 Instead, FB Bruce Miller and Gore both cut back, finding a hole as the aforementioned Boone (yellow circle) squashes an Indy defender.

The play turns up 7.  Propitious.

We then go to the second drive of the game, with San Francisco still down 7 - 0. 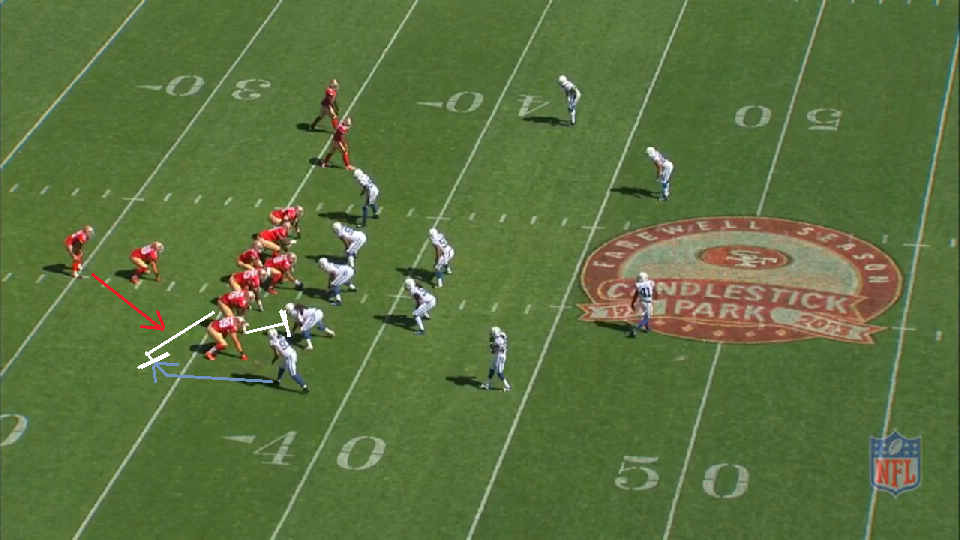 TE Vance McDonald blocks inside, leaving the Indy outside linebacker who runs passed him (blue) to be taken care of by RT Anthony Davis, who pulls outside.

This leaves a gap between the two which Gore will run through.  But he won't be alone.  He will have two lead blockers as Miller follows another pull block on the play from Alex Boone.

Not a train you wanna stand in front of. 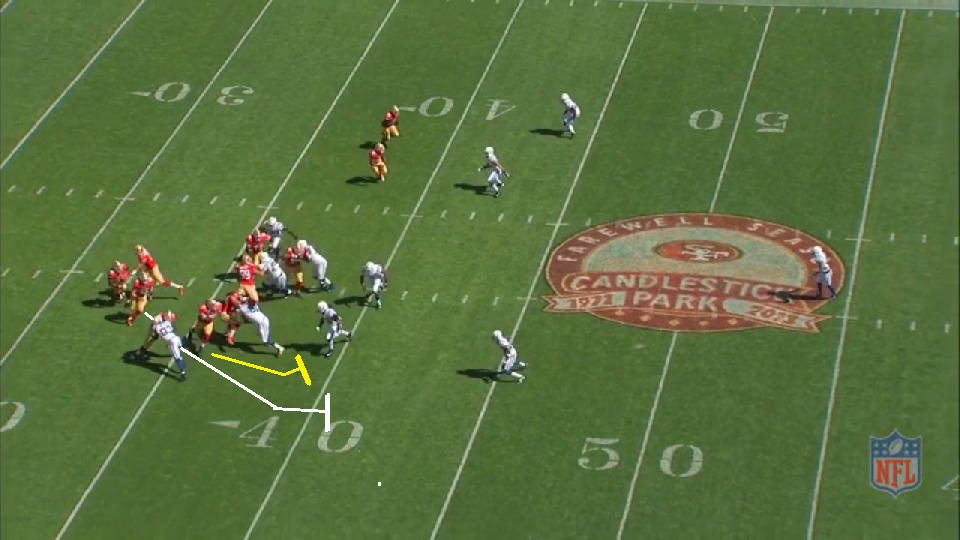 Boone is emerging through the hole first with Miller just in front of Gore. 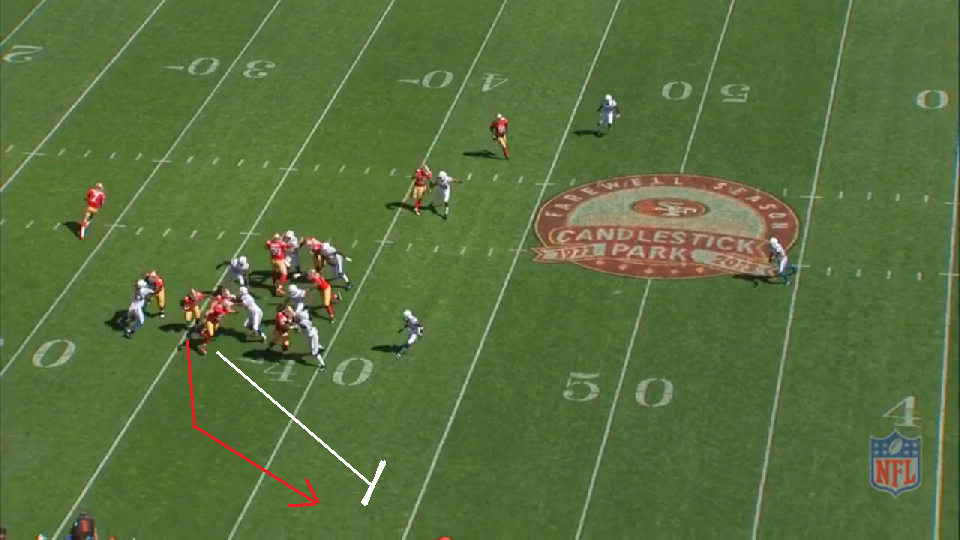 #75 takes care of his guy, sealing the edge and giving Bruuuuuuce and Gore free range on the outside.  Gore picks up 22.

The very next play, San Francisco comes right back to Gore.  What a concept.  This is precisely theJimmy Raye/Mike Singletary style of football we all signed up for when Jim Harbaugh came to town.  Exciting stuff. 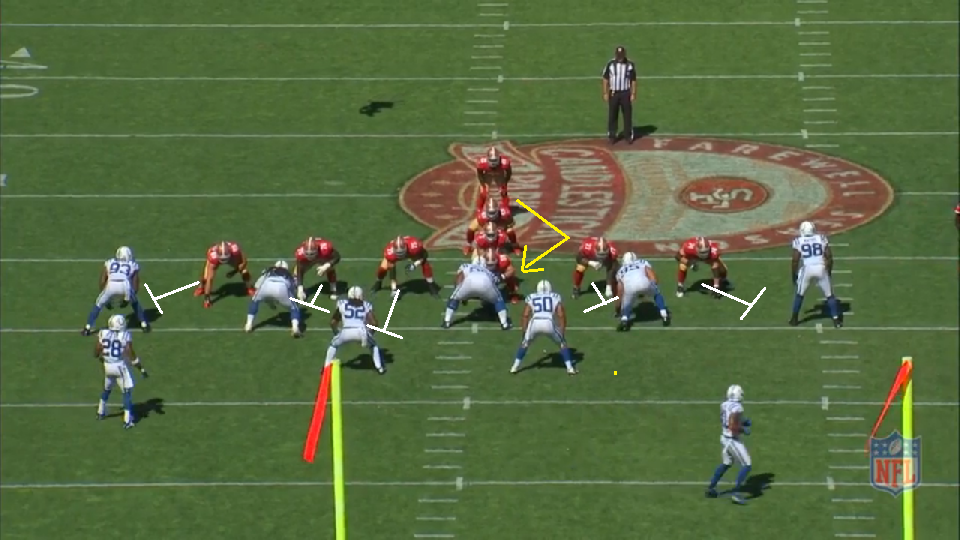 The play is a counter. 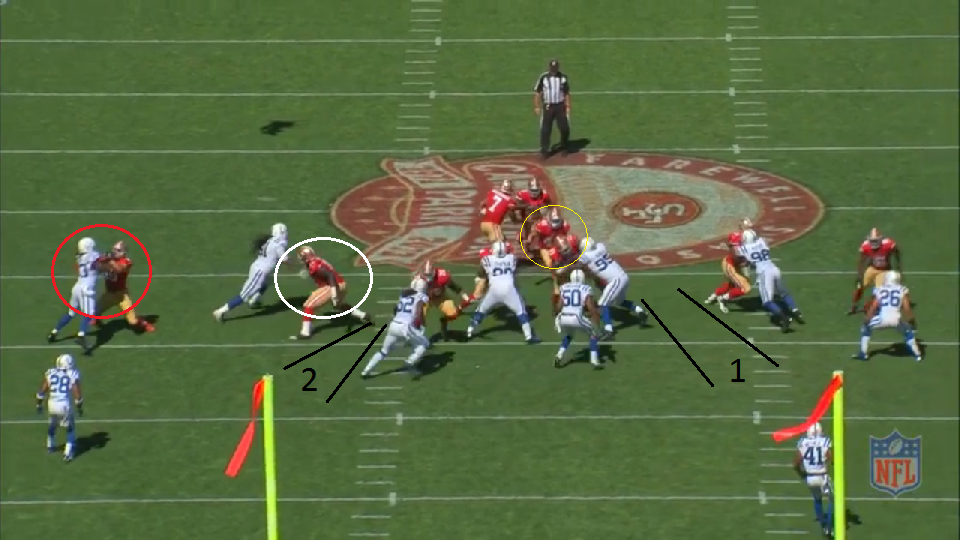 Miller (yellow) is already leaning inside towards lane #2 before Gore even has the ball.

RT Anthony Davis misses his block because the Colts defender dashes outside at the snap where Davis expected him in.  But #76 recovers well and drives him away from any potential interaction with the ball-carrier in the backfield.  Outside of him, Vance McDonald is taking care of his guy one-on-one. 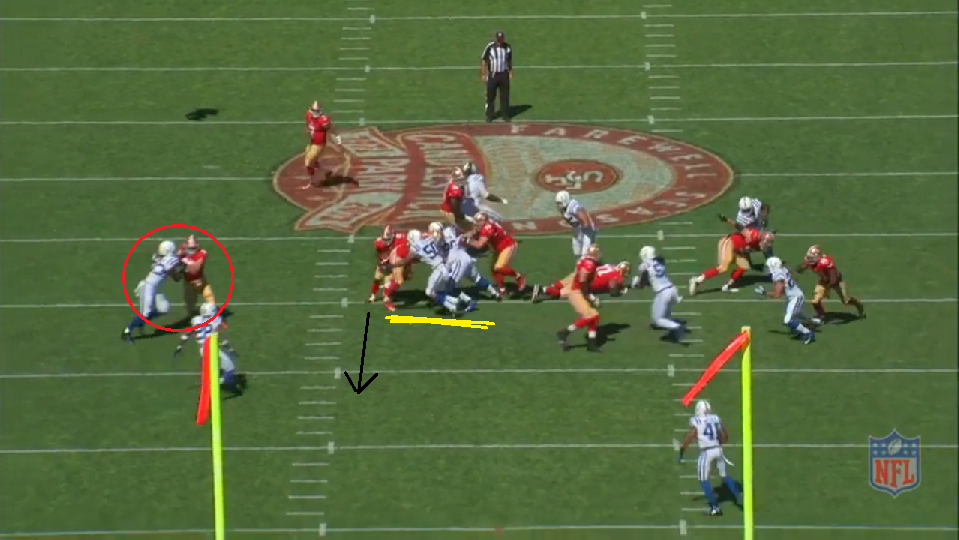 Miller leads the way again, doing a superb job here in taking on two guys at the same time (yellow underline).  McDonald continues handling his man, too, and Gore picks up 11 for another 1st down.

A Kaepernick sack leads to a 1-yard loss, which prompts Offensive Coordinator Greg Roman to return the ball to Frank the Tank.

If it ain't empty, leave your foot on the gas, Roman. 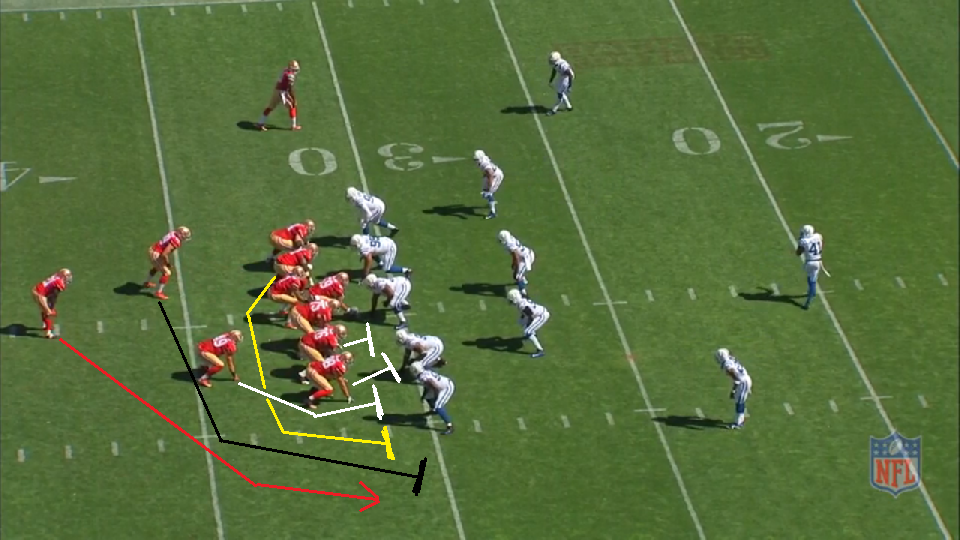 The play design here is cool.  McDonald (black line) motions from the bottom of the line into the backfield, where he will then pull back across the formation to lead for Gore (red).

Miller, who has been doing most the front-running thus far, is going to dive forward to take care of the out-most Indianapolis defender.  Gore's second lead will come from a pulling Mike Iupati (yellow). 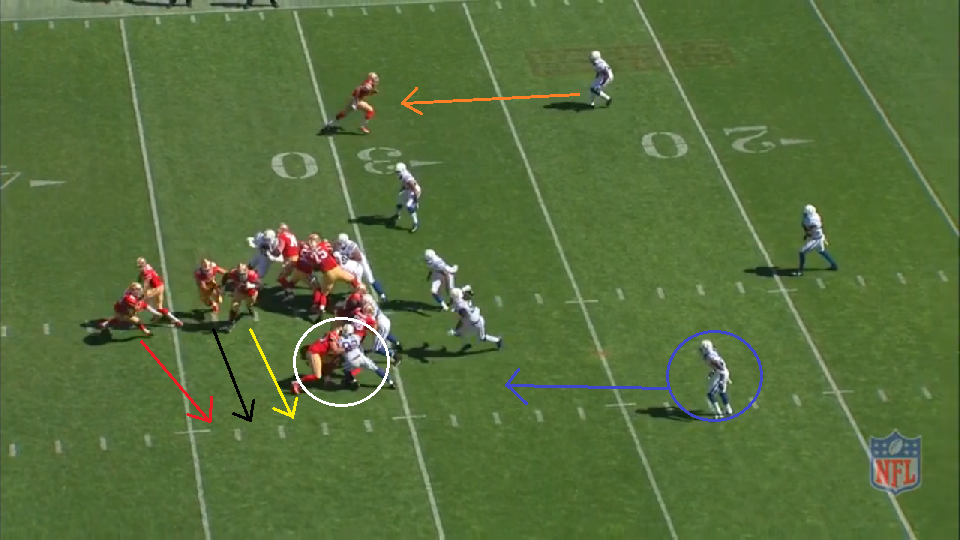 That gets us this.  All three men running the same direction with McDonald giving Iupati a gentle nudge of encouragement on the back.

Miller (white) takes care of his guy well.  Our future first ballot Hall of Fame fullback graded +2.0 in run-blocking on the day according to Pro Football Focus.  A solid outing for him and well-deserved.

What I would like you to notice here is the Indy secondary.  Look at that space.  Against Seattle, when the 49ers put three guys in the backfield as they did here, the Seahawks said, "lol", and threw 9 guys in the box to stop it.

Our hated division foe would have pulled their CB (orange) up to guard our receiver in press, kept their safety back all alone, and brought the blue circled defender forward prior to the snap.  Even if it turned out TE Garrett Celek (who was at the end of the line) was running a receiving route and the play was play-action, the DB would have handled him (it's even more amazing the Colts were so lax considering Vernon Davis was out of the game).

This was the primary problem with the run game in Seattle, in my opinion.  The 49ers had 4-man backfields far too much, begging Pete Carroll's squad to stack the box.  They did just that and the runs had nowhere to go.

Observe the difference in aggressiveness in our final still below.  With Iupati making his block, and tons of space on the edge due to the Colts playing away from the LOS, the play is already guaranteed a respectable gain.

But, on top of that, McDonald (black) now gets a running start into the much smaller Indy defensive back.  You can imagine what that leads to: 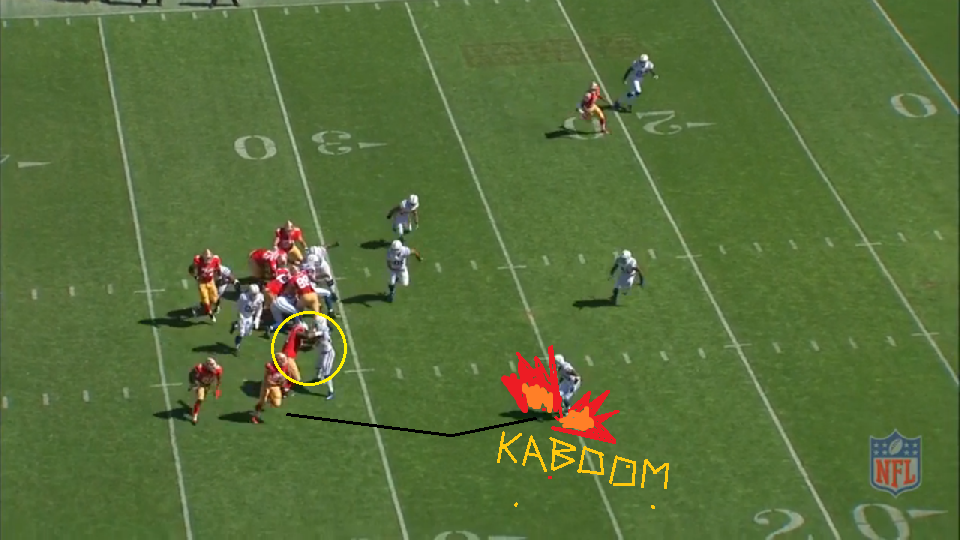 Next time against Seattle, the 49ers will need to spread the opposing defense out and get them away from the line of scrimmage before attempting to run -- especially at Century Link where communication is difficult and the crowd is in a frenzy.  That is the exact kind of environment where you want a sustained, consistent ground game to tire the crowd and the defense out.

But, this past Sunday, the Colts were not Seattle.  And Candlestick was not their memory-filled home.  It is ours.  I hope it never has to see another loss like this in its final season.

Gore would give way to Kendall Hunter for the next two rushes, who would lose 3 yards on the first attempt and gain 13 and a touchdown on the second, granting all of us a sigh of relief and a relaxed realization, "Okay, it started slow, but it's 7 - 7.  Glad we're gonna show up now and fight to win this one."

That was with just over 4 minutes to go in the 1st quarter.  After gaining 61 yards on his first 4 carries, all featured above, Gore would touch the ball just 7 more times over the next 3 quarters for 21 yards.  Our sighs of relief were premature -- and that needs to change.

The 49ers travel to St. Louis tonight to take on the Divisional rival Rams.  Thursday night games are notorious for inept offensive displays.  Short weeks, often including a fair amount of travel, lead to poor execution and defensive struggles.

It is essential, therefore, that the 49ers play good ol' fashioned football.  Any sloppiness on offense can get out of hand quick and cost the team another "W."

When things are not going your way, you sometimes have to step back and start playing safe, first.  Do not let bad play make up for bad play.  This is a lesson I think Kaepernick will struggle with because he is such a gifted athlete.  Understanding when to play within limits is not something anyone has ever likely taught The Kid.  He has instead always been told he has no limits.  It will take time, maturity, and a different kind of confidence to recognize when to step back and show patience.

John Barth once said in his novel, Lost in the Funhouse, "The wisdom to recognize and halt follows the know-how to pollute past rescue."

The past two games were polluted past rescue.  If things start off bad tonight, it might be time to halt.

Or, to continue the metaphor, it might be time to just run the dang thing.